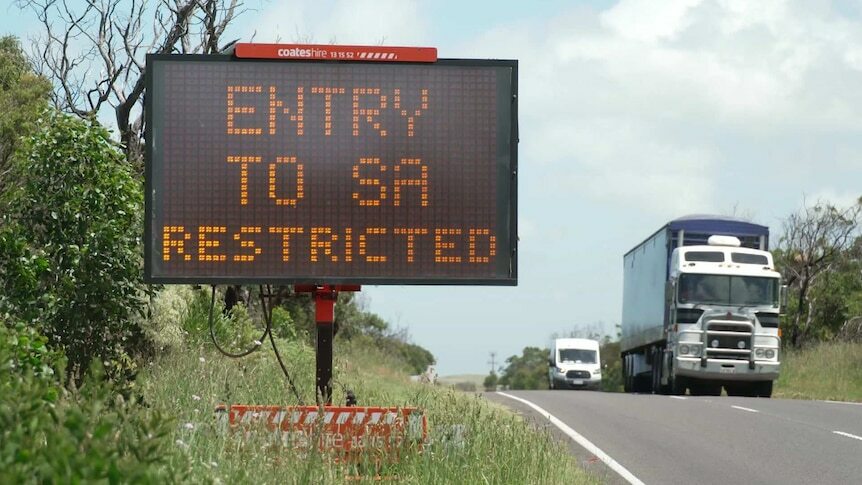 A sixth truck driver who travelled through South Australia has tested positive for COVID-19, after five other drivers entered the state while infected in recent days.

Authorities say the man travelled through the state to deliver timber on Thursday and Friday last week.

The driver's visit has resulted in one new public exposure site — the BP Truck Stop at Wingfield.

Anyone who was at the service station between 11:00pm and 11:59pm last Thursday and between 5:30am and 6:45am last Friday must get tested immediately and quarantine for 14 days.

SA Health today revealed it was not standard practice to reveal all locations attended by positive cases on its official exposure site list.

Chief Public Health Officer Nicola Spurrier said there were a number of exposure locations attended by other truck drivers which had not been publicly disclosed, because they were businesses which did not allow members of the public to enter.

One of those sites is the Big River Pork abattoir in Murray Bridge.

"They don't allow members of the public onto their site … but because we're very, very cautious here we had any close contacts tested and we also had the rest of the staff tested," Professor Spurrier said.

"There's a small handful of staff still at that facility out of about 300 yet to be tested, but all the close contacts have been tested.

Professor Spurrier defended not identifying every "non-public exposure site" attended by the man, which she said "might cause more fear".

"There may be a number of timber yards where he either picked up or delivered freight in our state," she said.

"[But], if there's no risk to the public, there's no point putting that up.

"Big River Pork have got fabulous COVID-management plans in place. Our team have worked very closely with the owners of that particular establishment. They've looked at the CCTV footage.

"There are a couple of people who were in closer vicinity of this truck driver, so those people have been directed into quarantine and they've been tested."

Employees at the Borg particleboard and melamine factory in Mount Gambier have been told that a positive case visited their workplace on Friday, and two people were getting tested.

Premier Steven Marshall said a total of 991 people are currently in directed quarantine, of whom more than 90 per cent have been tested and returned negative results.

"They could still develop symptoms, they could still be COVID-positive, that's why it's absolutely crucial they complete that entire 14 days. We don't want to take any chances," Mr Marshall said.

After the state's transition committee met this morning, authorities announced a major expansion of the Wayville mass vaccination clinic, which will more than double in capacity, from 42 to 96 vaccination bays.

"That means another 35,000 appointments are available between now and mid-October," Mr Marshall said.

Authorities are continuing to consider vaccination options for truck drivers, in the wake of the latest cases.

"We're looking at how we can have vaccine clinics set up out on the regional roads," Professor Spurrier.

Six new COVID-19 cases were reported in South Australia today, all of them in hotel quarantine with infections acquired overseas.

The two children, three teenagers and a woman in her 30s have all been in a medi-hotel since their arrival.

It is the largest number recorded in a day in the state since July 22.

SA Police Commissioner Grant Stevens said the transition committee decided on an easing of current restrictions on social gatherings to "accommodate opportunities for the wedding sector".

"Private activities that were previously restricted to 50 people can now be expanded to 150 people, and this means you can have up to 150 people as long as you have a QR code, an independent COVID marshal and that you comply with the one-person-per-2-square-metre rule inside that venue," he said.

The relaxation applies to all private gatherings, not just weddings, provided they are outside homes where the 20-person cap remains.

Commissioner Stevens also confirmed that SA Police had been escorting South Australians stranded in New South Wales back to their homes.

"When people have been identified that they're able to participate in supervised home quarantine, we are escorting them from the border to their home address," he said.

"It's in the order of about six to 12 a day from different locations."