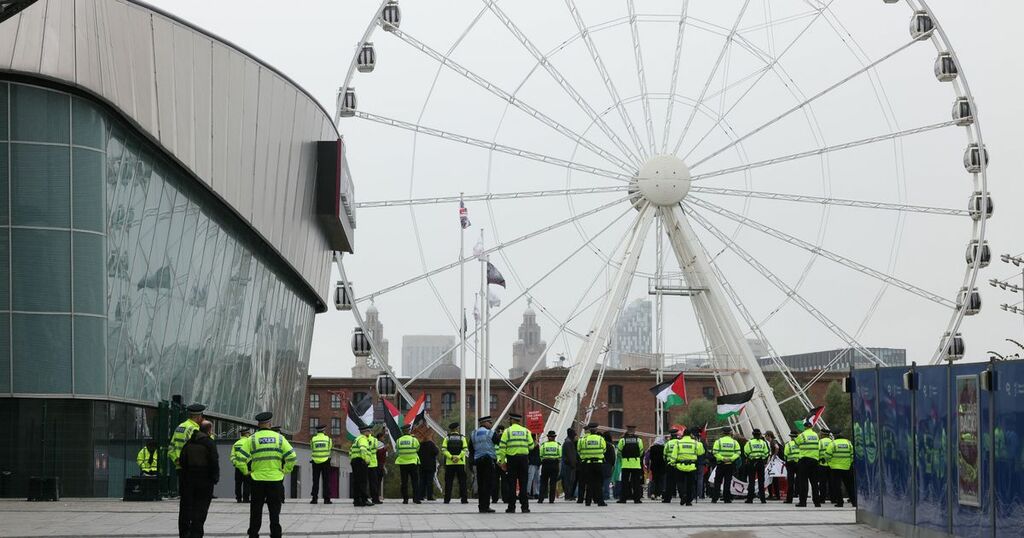 Six people were arrested during two days of protests against a controversial arms fair on Liverpool's waterfront.

Around 80 to 100 people attended a protest march in the Kings Dock area today against the AOC Electronic Warfare event, which is being held today and tomorrow at Liverpool's Exhibition Centre.

A 46-year-old woman from New Brighton and a 22-year-old man from Liverpool were arrested today for public order offences and obstructing a police officer.

READ MORE: Shocking scenes of violence as fights break out across city

Merseyside Police said two people remain on the roof of the exhibition centre and efforts are ongoing to ensure they come down safely.

The demonstrations began last night, with some protesters making it onto the roof of the conference centre.

A 46-year-old woman from Liverpool and a 31-year-old man of no fixed address were arrested on suspicion of conspiracy to commit criminal damage after police attended the Pullman Hotel.

They have since been released on police bail.

Two further arrests were made by police on Monday evening following reports that paint had been sprayed on stone arches on Wapping dock.

They included a man and woman who were arrested on suspicion of causing criminal damage.

A large police presence is on the waterfront today where a police Dispersal Zone remains in place until 6.44pm on Wednesday.

The order comes under Section 34 of the Anti-Social Behaviour Act 2014, which gives police officers and police community support traffic officers powers to direct people they suspect are causing or likely to cause crime, nuisance or anti-social behaviour to members of the public to leave a designated area and not return for up to 48 hours.


Under the legislation, officers have the power to seize any item used in the commission of anti-social behaviour.

There is widespread opposition to the arms fair event across the city, with many saying it promotes violence and the use of powerful weapons - and a number of demonstrations have already taken place in the lead up to it.

Chief Superintendent Paul Court said: “Police have been in close liaison with organisers and partner agencies in recent weeks to ensure this protest causes minimum disruption to local communities and businesses.

“We will continue to engage in positive dialogue with the protestors and organisers, and officers will be deployed for the duration of the event to help make sure it passes without further incident.

“We have a duty to facilitate peaceful and lawful protest, but will not tolerate acts of criminality and those who engage in such acts will be dealt with robustly.

“I am grateful for the cooperation of those protest groups who have attended the event today and I am pleased to have received positive feedback from those attending about the manner in which we have policed the protest.”