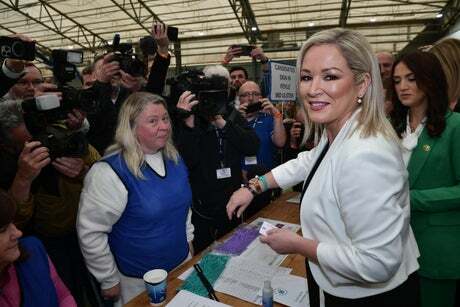 By Alastair Jamieson and Adam Forrest

Sinn Fein is on course for its best ever result in a Northern Ireland Assembly election after receiving the most first-preference votes, as counting resumed on Saturday.

Sinn Fein currently has 21 seats, while the DUP have 19, the Alliance Party 14, the Ulster Unionists (UUP) six and the SDLP on four, with results through for almost 70 of the 90 assembly seats.

This means that it received 29 per cent of first preference votes, compared with 21.3 per cent for the DUP, 13.5 per cent for Alliance. It pointed to a majority of support for the Northern Ireland protocol.

Sinn Fein’s vice president Michelle O’Neill, on course to be the first nationalist first minister, was elected on the first count in Mid Ulster, with Alliance leader Naomi Long topping the poll in East Belfast.

Ms O’Neill, surrounded by party colleagues and supporters as the result was announced in the Magherafelt count centre, said Sinn Fein wanted to “together work in partnership with others”.

DUP leader Sir Jeffrey Donaldson, elected on the first count in Lagan Valley, remained defiant. “I’m very pleased with how the DUP has done in our constituencies. We’ve held a remarkable number of seats where people were predicting all kinds of negative things.”

Sir Jeffrey said the DUP would accept the outcome of the election, but added that the protocol remained a barrier to power-sharing at Stormont.

“Our position remains that we need to remove the long shadow of the protocol that is inhibiting our ability to operate and function properly within the political institutions, and the sooner that happens, the sooner we’ll be in a position to move forward,” he told the BBC.

DUP MP Sammy Wilson also warned earlier that his party would not re-enter the Stormont executive without action by Boris Johnson’s government to ditch checks.

“If there’s no legislation in the Queen’s Speech and no plans to deal with the protocol then we’ve made it very clear the assembly can’t function if the poison of the protocol is still there,” he said.

But Sinn Fein MP John Finucane said people were more concerned about cost of living issues. He said: “I believe the DUP during the campaign outlined a five-point plan ... I don’t see how that is possible without an executive.”

Alliance leader Naomi Long said results for her party – becoming Stormont’s third largest party for the first time – could herald the end of a political system based on binary division.

The 1998 Good Friday peace agreement saw the creation of a system that required the biggest political bloc of unionists to share power with the biggest bloc of nationalists in a mandatory coalition.

Mrs Long called for “grow up politics” and an end to the mandatory coalition system, saying she would raise the matter with Northern Ireland secretary Brandon Lewis on Monday.

“People are tired of the orange and green – they see it doesn’t deliver,” she told Sky News. “They see it creates instability in our political institutions, and it runs the risk of collapse.”

On the protocol row, she added: “Unionism needs to think very carefully, because it was their Brexit that has delivered this mess. They now need to find a route out of that.”

“It’s going to be a long day and maybe a long night as well,” he said on Friday. “I think there has been a big vote for Sinn Fein on the nationalist side. People decided to send a very clear message that nationalists should not be locked out of the first minister position.”

Cabinet minister Nadhim Zahawi restated the government’s position that all options for dealing with the protocol remain on the table.

The government is hoping the outcome of the election – which saw Irish nationalists’ Sinn Fein emerge as the largest party – will persuade Brussels the checks must be dropped to restore power-sharing arrangements.

The education secretary told Sky News: “The important thing is to try and make sure we work with the parties in Northern Ireland, but also with the European Commission to make sure that we leave no stone unturned to try and make it work.”

The first MLA elected to the Stormont Assembly pointed to a major surge for the Alliance Party, the only non-unionist, non-nationalist party in the contest.