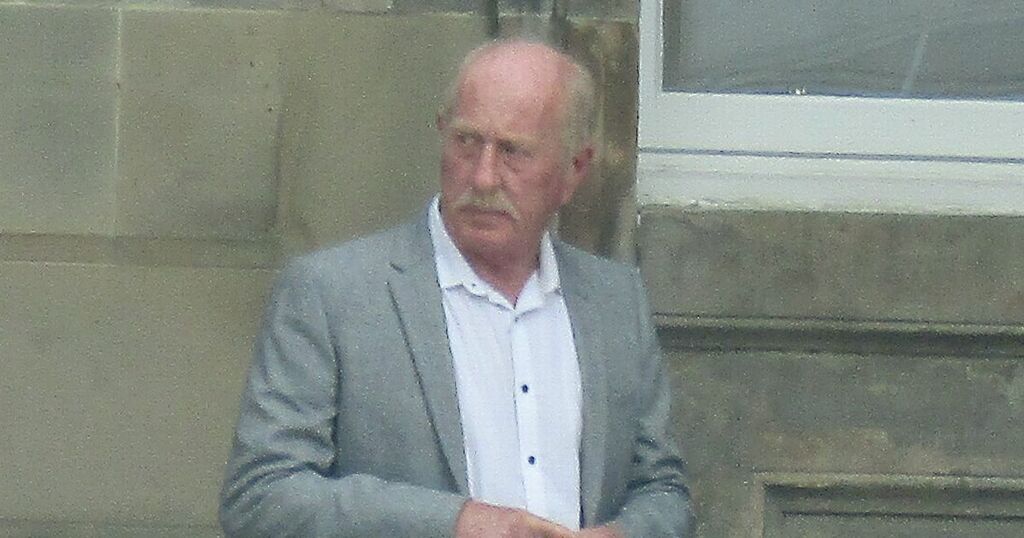 A pervert greenkeeper who forced terrified schoolgirls to perform sex acts on him with a milk bottle has been jailed.

Peter Reid, 69, repeatedly preyed on four youngsters inside his home in East Kilbride, Lanarkshire, in the 1980s.

The fiend waited until his wife had left the house before engaging in sickening behaviour in his bathroom and bedroom.

He also exposed himself to girls, who cannot be named for legal reasons, while he was working in his loft.

A complaint was made against him in 2019 and a police investigation led to other women being contacted who all gave similar accounts of Reid's twisted behaviour.

Reid - of Barrhead, near Glasgow - denied all wrongdoing between May 1981 and December 1985 and went on trial at Hamilton Sheriff Court.

But jurors took just an hour to unanimously convict him of four charges of lewd, indecent and libidinous practices towards the girls who were all aged between eight and ten when they were abused.

He was remanded in custody by Sheriff Colin Dunipace who branded the case 'harrowing'.

Giving evidence from behind a screen, one victim told depute fiscal Neil Thomson how Reid targeted her.

The woman, 48, said: "He was in the bath and I was asked to go down to the kitchen to get a glass milk bottle.

"I went into the bathroom with it and he was not wearing any clothes and he told me to put the empty milk bottle on his private parts.

"On another occasion he was in the loft and he shouted me up.

"I could see he wasn't wearing anything from the waist down and his hands were on his genitals.

"I felt nervous, scared, frightened and fearful by it.

"I'm here to tell the truth because these things definitely happened."

Another woman told how she was targeted as Reid sat in a bath after he asked her to bring him a cup of tea.

The 48-year-old said: "I was nervous to even go near the bathroom because I knew he was in the bath and he was naked.

"I tried to put the tea down and not look at him but he clearly wanted me to look at him and when I did he was touching himself.

"I left the house as quickly as I could."

In evidence Reid, who worked in Rouken Glen Country Park, denied he had exposed himself or performed sex acts.

"I don't have a sexual interest in children and it strikes me that they were all making it up because I'm telling the truth."

Sheriff Dunipace deferred sentence on Reid until next month for reports and placed him on the sex offenders' register.

He added: "You have been found guilty by the jury of extremely serious offences and you should be under no illusions the court takes a very, very serious view of this type of offending.

"Having regard to the nature of these offences it is appropriate that you be remanded in custody."

After the guilty verdicts it was revealed Reid has a previous conviction for similar sexual offences from 1984 involving some of the same victims.