The journey from blank slate to full ranking is no small one by the Sports Illustrated staff, so this feature pulls the curtain back on how some of the processes came together. Recruits by the numbers, trends and close calls litter the discussion around the nation’s best every cycle, and this one is no different.

The initial questions leading up to the SI99 release, even after Monday’s story on Dante Moore being the top overall prospect (and by default QB1), surrounded the pecking order of the passers. Most have called the 2023 cycle some variation of “the year of the quarterback” to the point we have been prepared for the splitting-hair nature of making the final call for Moore over Nico Iamaleava, Jaden Rashada, Malachi Nelson and Arch Manning, among others.

Earlier this summer, we broke down those five as the QB prospects having seemingly separated themselves from the rest in the race. There is plenty of depth at the position, considering 11 made the SI99 at quarterback. We went category by category, and at that point Iamaleava and Manning appeared as the best bets. The Tennessee commitment is the highest-ceiling prospect, and the future Longhorn has the strongest floor in the department. But with more digging done over the last two months—from cross-checking more video, sourcing and of course the Elite 11 Finals at the end of that month—things changed.

Moore forced his hand the rest of the offseason, capturing SI’s MVP honor at the Elite 11 to cap it, reminding the country of his consistency, prowess and production in any quarterback setting. Just last week, Moore’s own head coach admitted he saw more of his QB than he had in the last three years while being put through some of the situations the Elite 11 personnel did. Couple it with his state title run in 2021, which also came with gaudy production (3,000 yards, 40 TDs, three INTs), and his run over the last year was just better than that of his peers.

The fun part is that we’ll start the process all over throughout the fall, as many of these top passers—all ranked in the top 10 nationally—work as seniors. Manning will be working in a more wide-open offense, Iamaleava transferred twice between his junior and senior season and both Rashada and Nelson are working with new variance among pass catchers around them. Moore now works with a theoretical target on his back looking to avoid being the first Preseason SI99 No. 1 to fail to hold the top spot wire-to-wire (Bryce Young in 2020, Caleb Williams ’21, Travis Hunter ’22).

As one would imagine, the number of SI99 recruits headed to one program stands tall in breaking down top classes to a given point. The initial ranking features just 21 prospects yet to go public with a college verbal commitment, meaning 78 have already come off the board.

Of the latter portion, Notre Dame paces the country with eight SI99 recruits, including No. 1  defensive edge talent and No. 3 overall prospect Keon Keeley. Alabama and Ohio State are right on the Irish’s heels with seven commitments making the cut each. The Crimson Tide’s haul includes No. 1 safety Caleb Downs, No. 2 running back Richard Young, and No. 1 nickel Jahlil Hurley, among others. OSU’s group includes No. 1 wide receiver Brandon Inniss, one of four future Buckeyes at the position (Carnell Tate, Noah Rogers, Bryson Rodgers) in the ranking. Texas and Miami each sit with six SI99 recruits committed, including top 10 QBs Manning and Rashada.

Defending national champion Georgia comes in next with five SI99ers already on board, followed by LSU, Tennessee and USC with four. Clemson, Oregon and Oklahoma have three each, while defending recruiting champion Texas A&M, Auburn, Florida, Florida State and Penn State hold two each. Baylor, Iowa, Iowa State, Louisville, Michigan State, Ole Miss, Pitt and Stanford round out the programs represented with one pledge making the cut.

The latest tangibility in the ongoing debate about the best talent-producing state, at least in this sample, tilts back to the state of Florida. Even without the four IMG Academy boarding school prospects which made the cut, the state is most represented in the SI99 with 20 state natives listed. Texas is right on its heels with 19 players on the list calling it home.

Alabama, with nine members calling the Yellowhammer State home, is ahead of states more known for talent production like California, Georgia and Louisiana, all with seven players represented each. Somewhat surprisingly, Massachusetts comes in at No. 7 in the theoretical “state rankings” with a trio of recruits, including the top offensive tackle projection in Samson Okunlola. Iowa, Maryland, Missouri, South Carolina and Tennessee each have a pair of natives in the ranking.

Rounding out the states represented, Arizona, Illinois, Indiana, Michigan, Minnesota, Mississippi, Nevada, North Carolina, Ohio, Oklahoma, Pennsylvania, Virginia and Washington, D.C. each had one in-state recruit make the cut. In all, the SI99 includes prospects from 25 of the 50 states.

As the sport of college football evolves, certain positions seem to continue to be elevated, usually surrounding the passing game itself. The SI99 reflects that, too, with pass rushers and pass catchers (wide receivers) each holding the most projections with 17 each. Quarterbacks make up the third-most spots in the ranking, with 11 future faces of a given program named. Offensive tackle and linebacker are next up, with nine each.

Defensive backs naturally have increased value in today’s game, too, with 15 listed in the SI99 between seven cornerbacks, five safety recruits and three at the nickel position. SI ranks the nickel position, and conversely slot receivers (there are five this year in the cut) unlike the rest of the industry. Interior defensive linemen and running backs had five selections each with tight end (four) and interior offensive line (two) rounding out the 13 different positions represented in the ranking.

Putting together a ranking at any one position, often how the process begins each cycle, is difficult enough. But in the nature of true athleticism across the varsity sports landscape, several recruits can project at different positions depending on their preference, program of choice or even growth before ever arriving to their college campus.

Francis Mauigoa has been a critical study for SI. The Miami commitment from IMG Academy has experience all over the offensive line ahead of playing left tackle for the Ascenders as a senior. While we feel he can absolutely content at left tackle in college, his frame combined with right tackle or even guard upside could be unmatched in the class, hence the projection as the top interior prospect in the class.

Qua Russaw is another we went back and forth on, between edge and off-ball linebacker. In seeing him at the end of July in person, rocked up at 6'3", 235 pounds, there’s little doubt he could rush the passer exclusively at the next level, but there is so much versatile potential in his game. The Montgomery (Ala.) Carver standout could be a jack-of-all-trades type backer in college, rushing the passer on occasion à la an athletic and physical comp in former NFL first-rounder Rashaan Evans. Russaw opens up as the No. 1 LB in the class as a result.

Keeping it in the state of Alabama, Jahlil Hurley could make a case for being a top-ranked cornerback or safety, making our thoughts shift to nickel based on the versatility. The Alabama commitment already has experience at corner, safety as well as a hybrid blend of the two against strong competition – with success in every spot. Throw in his great length at 6'1" and he could be the next great sub defender in Tuscaloosa, so here he gets the nod as the No. 1 nickel in the class.

Other close calls positionally were Ronan Hanafin, as we lean wide receiver over linebacker, Jason Moore (IDL over DE), Peter Woods (DE over IDL), Johntay Cook (WR over slot), Nyckoles Harbor (DE over TE) and Roderick Kearney (OT over IOL), among others,

Likewise in crunching the final numbers and position projections, there is inevitably a group of very good prospects to be left off of the SI99 rankings. Last cycle, seven prospects outside of the initial cut changed our minds in the end, making the January ranking ahead of National Signing Day. 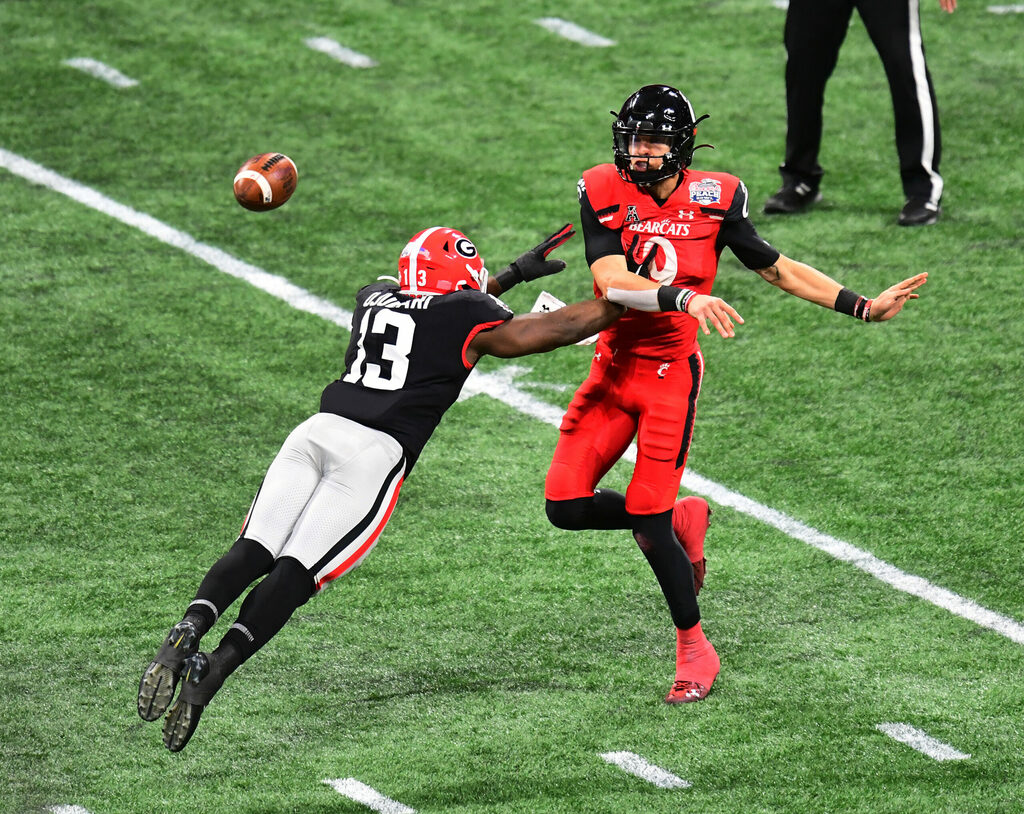 USA Today Sports Media Group
From analysis to the latest developments in health, read the most diverse news in one place.
Jets tackle Mekhi Becton is likely out for the season and, oh man, Zach Wilson did not need that

Becton's latest knee injury means Zach Wilson's pockets will get a little dirtier. That's a problem for a mistake-prone QB.

Cedric Baxter Jr. has committed to play his college football at Texas.

The Bears have released their first unofficial depth chart ahead of their preseason opener, which includes some surprises.

Which teams in the Power Five conferences should rebound from a mediocre 2021 and make a whole lot of noise?

USA Today Sports Media Group
One place to find news on any topic, from hundreds of sites.
Ranking the Top 10 undecided recruits remaining from the Class of 2023

Here is a review of the top 10 prospects in the 2023 class that remain undecided.