Should Kevin McCarthy be Speaker of the House? - opinion 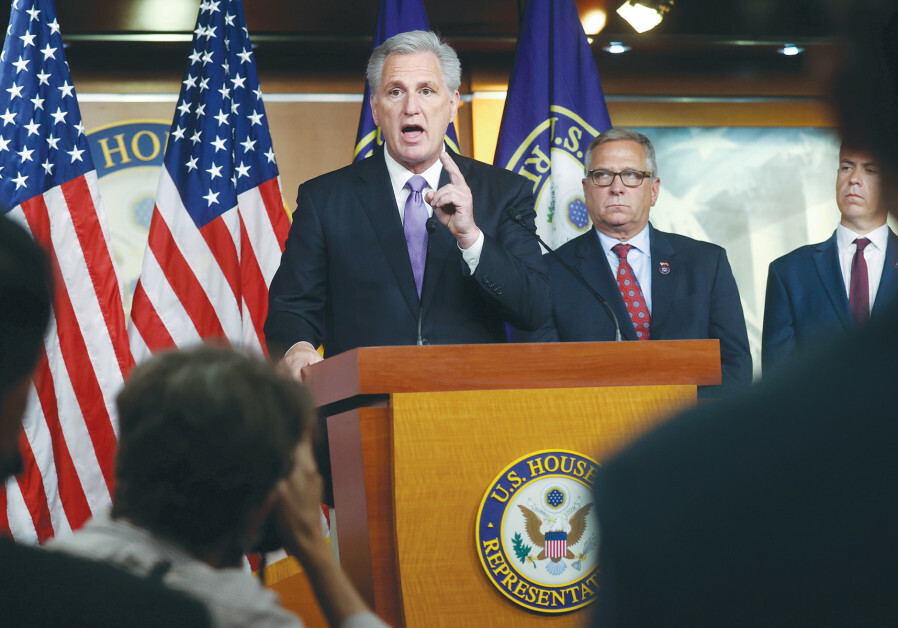 Rep. Kevin McCarthy, the man who wants to be the next Speaker of the House, is driven by the twin demons of ambition and fear. He has long dreamed of becoming speaker and he is terrified that former president Donald Trump might give his blessing to someone else.

McCarthy, a Californian Republican, is in many ways the polar opposite of the woman he seeks to replace – and threatened to “hit her” with his gavel. It goes far beyond gender and party; what drives his contempt for the first woman speaker, Nancy Pelosi, are the qualities that make Nancy Pelosi a strong and historic leader.

If Republicans take back control of the House next year, McCarthy wants to make sure Trump backs “my Kevin” and not someone like Ohio’s Jim Jordan, an ambitious Trump favorite and right-wing firebrand who lost his bid for the job in 2018 to McCarthy.

That is behind the House minority leader’s rush to Mar-a-Lago to kiss the royal ring right after US President Joe Biden’s inauguration and recant earlier criticism that Trump “bears responsibility” for the January 6 insurrection. Having transformed himself from critic to defender of the Big Liar, he recently told a TV station in his Bakersfield, California, district that the FBI and a Senate committee cleared Trump of any role in the attacks on the Capitol by his followers. Totally false.

He’s even tried to blame the sacking of the Capitol on Pelosi for not keeping the doors locked. He is so frightened of what an impartial investigation of the January 6 events will reveal – not only about Trump but of his own role – that he has sought to sabotage a bipartisan 9/11-type commission and then a special House inquiry. Both moves were major blunders costing him and Republicans any opportunity to influence the investigations. Six weeks ago, he announced House Republicans would launch their own probe, but so far bupkes.

When the House panel asked 35 telecom companies to retain social media records of some House Republicans seeking to prevent Congress from certifying the presidential election, McCarthy threatened retribution if they complied and he became Speaker. Democrats and independent legal experts accused him of trying to impede a legitimate congressional investigation, a potential felony.

His name is reportedly on the list of those telecom accounts because of his conversations with Trump on January 6. The committee also wants records on extremist groups and militias present at the insurrection and McCarthy, no doubt, is also worried about revelations of their connections to members of his caucus, particularly 11 who openly supported efforts to overturn the election. Pelosi objected when he tried to put two of them on the House committee, Jordan and Jim Banks of Indiana, because they are potential witnesses.

While there have been no consequences for those who embraced the Big Lie, lionized the violent protesters or who may have helped them and pushed efforts to block the election certification, there is an intense campaign – led by McCarthy – to punish those who seek the truth about January 6.

WHEN THE number three in the House GOP leadership, Rep. Liz Lynne Cheney of Wisconsin, voted to impeach Trump and supported the investigations, she was stripped of her post and replaced by a Trump sycophant, and now some of Cheney’s colleagues want her and Rep. Adam Kinzinger of Illinois, who also voted to impeach, ejected from the House Republican Conference as Democratic “spies.” McCarthy branded them “Pelosi Republicans” for joining the bipartisan January 6 commission.

Capitol Police are preparing for a new rally planned by pro-Trump forces at the Capitol on Sept 18 in support of the insurrectionists currently in jail. Rep. Madison Cawthorn, a North Carolinian Republican, has called them “political prisoners” and “hostages” and speaks of trying to “bust them out.” He told a group in his home state that “we have a few plans in motion” for more Washington demonstrations.

When Alabama’s Rep. Mo Brooks said he could “understand citizenry anger directed at dictatorial socialism” while a Trump supporter threatened to blow up the Library of Congress last month, McCarthy was silent.

McCarthy has done little to tamp down such over-the-top talk by his flock. He criticized Holocaust comparisons but took no action in the face of frequent and continuous antisemitic tropes, particularly among the notorious 11, to say nothing of Trump himself.

Rep. Paul Gosar, who described the insurrectionists as “peaceful patriots,” has been denounced by his siblings for “anti-Semitic diatribes” and Islamophobia. Rep. Marjorie Taylor Greene is a recidivist despite visiting the Holocaust Museum; she came up with the Jewish space laser conspiracy and attempted to organize a caucus dedicated to protecting “Anglo-Saxon traditions.” Cawthorn has lamented the problems he’s encountered trying to convert Jews. McCarthy himself has accused Jewish billionaires of trying to “buy” the 2018 elections.

That may help explain why a recent poll of Jewish voters for the Jewish Electorate Institute showed a 52% favorability rating for Pelosi but only 10% for McCarthy. It also goes to telling why there are only two Jewish Republicans in the 117th Congress and nationally Jews vote 75-80% for Democrats.

If McCarthy becomes speaker, the word of the day will be revenge. The telecom companies will be in his crosshairs. He’s been talking of impeaching Biden over the Afghanistan pull-out. He’ll move quickly to quash any January 6 investigations and turn the focus on Black Lives Matter and others who demonstrated last summer against racism. And, of course, he will go after Hunter Biden and maybe reopen hearings on Benghazi and Hillary Clinton’s email server.

McCarthy is counting on a historic trend that the party that wins the White House tends to lose seats in Congress in the next off-year election. The Democrats hold very slim majorities in both chambers. The time to start worrying and working is yesterday.

McCarthy wants the blessing of the worst president in history so he can become possibly the worst speaker in history.