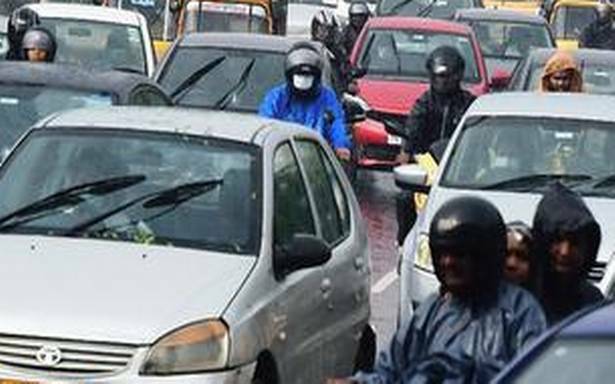 Ever since Chennai started unlocking after the second wave of the COVID-19 pandemic by the end of May, it has been witnessing an exponential growth in vehicular traffic which does not augur well for the limited road infrastructure.

The traffic police have been caught between regulating traffic at important junctions and preventing violations triggered by the rising number of vehicles.

Activists complain that traffic violations had become rampant every day. Most of the cases pertain to driving on the wrong side, especially arterial roads, breaking one-way rule and haphazard parking at several places.

This created a burden on the traffic police personnel whose routine job involved regulating traffic during peak hours and booking traffic violators during non-peak hours.

However, as more vehicles were getting added to the roads daily, the workload of the traffic police had become heavy. A case in point was pavements being increasingly occupied by two-wheelers for parking and motorists causing accidents by riding on the wrong side.

T. Santhosh, a resident of Tambaram, said traffic violations had become a regular feature on several arterial roads of the Taluk Office Road and Velachery Main Road in Little Mount, motorists driving on the wrong direction on Taramani Link Road to save a few km and unauthorised parking of vehicles on the arterial Anna Salai near the Omandurar Estate. Despite limited manpower, the traffic police are on the job of regulating traffic and penalising violators in large numbers, said senior police officials.

The traffic police have segregated traffic violations under two categories — 2H (driving without helmet and not wearing seat belt) and 6H (over-speeding, drunken driving, talking on cellphone, overloading of goods, signal violations and driving in wrong directions, and carrying passengers in commercial vehicles).

A senior police official, while acknowledging the burgeoning number of vehicles, said there was a spike in the cases of traffic violations. He said Commissioner of Police Shankar Jiwal had given directions to the traffic police to launch a campaign against drunken driving and driving on the wrong side of the road.

The official said nearly 7 lakh cases of traffic violations were booked between June and October. Of these, 80,000 cases were those of driving on the wrong side of the road. He said the traffic police had been targeting drunken driving by forming special squads and these squads had been able to catch over 15,000 offenders.

As the menace of drunken driving was more prevalent at night, the city police have formed 12 special squads and these teams would be posted in important junctions with the squads changing their positions every day so that the offenders did not escape, he added. To ease the burden on the personnel, traffic wardens were posted to regulate traffic during peak hours besides taking steps to create awareness about following traffic rules and regulations by conducting meetings with app-based delivery companies such as Swiggy and Zomato.

M. Radhakrishnan of Thozhan said the increasing job opportunities available in the e-commerce and app-based delivery companies had resulted in the growth of vehicles after the COVID-19 pandemic.

While these companies had created jobs, the State government was yet to create a wing whereby these delivery persons could be audited for their driving skills and their behaviour, as they spent several hours on the road. Although talking on mobile phone while driving was a major traffic violation, most delivery persons could be seen speaking on or looking at the phone, he said.

Activists want the city traffic police to reintroduce spot fine, which was replaced with e-challan system, and the need for promulgating the new Motor Vehicles (MV) Act 2020 where the fines for traffic violations were stiff.

A senior official of the traffic police said the e-challan system had helped in curbing corruption and creating an easy payment method for the public.

Regarding the promulgation of the new MV Act announced by the Centre, it was for the State government to decide, he added.