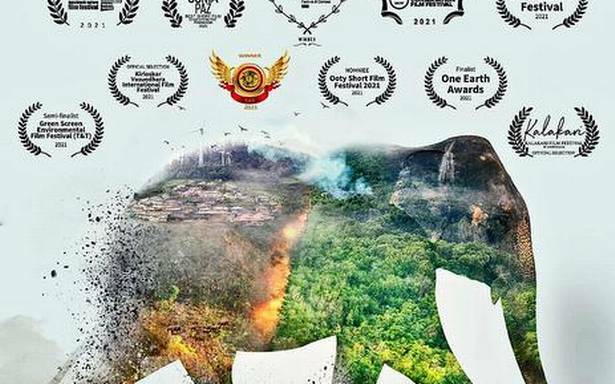 “One of the most startling things we observed while filming this movie, is how humans are completely altering elephant behavior in different landscapes,” says Santhosh Krishnan, one of the directors of the film “Kaliru” – a documentary, charting problematic human-elephant interactions in some of the most conflict-prone landscapes of Tamil Nadu.

“In the forests bordering Sathyamangalam and Hasanur, elephants routinely wait for trucks carrying sugarcane, by the side of the road. When the vehicles stop at the check post, they take sugarcane from the trucks. At least 20 such elephants exhibit this kind of behavior. They have have come to rely on these trucks as a source of food and rarely venture into the forest,” said Mr. Krishnan.

The film was made by Mr. Krishnan and Jewsin Kingsly, a naturalist from the Kanha Tiger Reserve in Madhya Pradesh. “Kaliru”, meaning bull elephant, is around 18 minutes long and is narrated by renowned wildlife photographer and conservationist Belinda Wright. It is garnering plenty of attention and acclaim by conservationists in India and abroad. It has won and been nominated for multiple short film awards, and was made to sensitise young people about the threats that elephants in India face, said Mr. Kingsly, who is a resident of Mettupalayam.

It was during one of his visits back home that Mr. Kingsly hit upon the idea to make the film. “On the day I came home to Mettupalayam, our family had eaten a jackfruit and had disposed of the peels in a community dustbin outside our house. Late at night, we found an elephant rummaging through the bin, and that’s when I decided to start working on the film to highlight how altered elephant behavior and conflict go hand-in-hand in places like Mettupalayam,” he said.

Filmed over a period of six months, with a budget of around ₹80,000, the film focuses on problematic elephant-human interactions in Mettupalayam, Valparai and a few other areas. “Each area has its own set of problems and it leads to elephants altering their behavior. In Mettupalayam, the Kallar corridor, which was already known to be a bottleneck, has now almost been completely lost due to development in the form of farms, construction projects and fences, leading to elephants entering human habitations to circumvent the blocked migratory routes they have been using for millions of years,” said Mr. Kingsly.

“There is one elephant in Mettupalayam, locally known as Bahubali, who has become totally fearless of humans and fireworks, and he only leaves a settlement after eating his fill,” said Mr. Krishnan, who adds that the loss of fear among elephants usually leads to bad outcomes. “Ultimately, such elephants face retaliation from farmers or get captured, and are made to live out their life in captivity. While in places like Valparai, elephants are routinely harassed and driven away from plantations by the owners. They force the forest department to chase away the elephants, most of whom are passing through, during their annual migration,” he added.

The two filmmakers hope that the movie will lead to better understanding of pachyderms among people who live in close proximity to them. “We hope that ‘Kaliru’ will spur introspection among communities living in these areas where there is a high degree of problematic human-elephant interactions, and how people need to alter their behavior to live in peaceful co-existence with these magnificent animals,” said Mr. Kingsly. The film can be watched on YouTube.