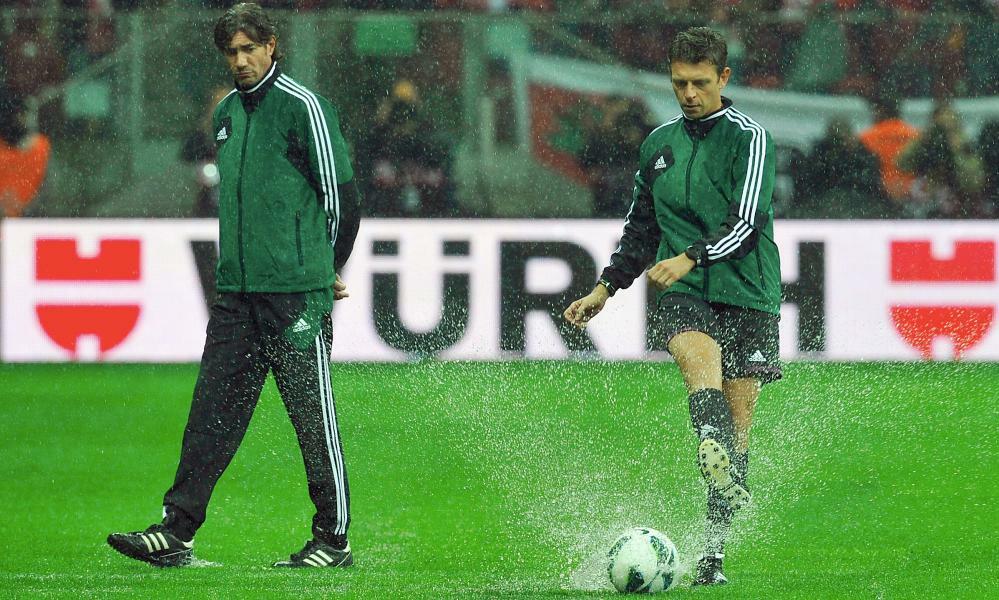 Tonight, England play Poland in Warsaw, the first time they have played them there since October 2012. That was a night that recurs in my dreams and nightmares, as well as those of three ex-footballers and several television producers.

I was presenting ITV’s coverage. Gareth Southgate, along with two other eminent former footballers, Lee Dixon and Roy Keane, were our match analysts.

Nine years ago, we came on air, live on ITV at 7.30, for an 8pm kick off. As we did so, word reached us of a pitch inspection as, after hours of heavy rain, there was a certain sogginess about the playing surface. The four of us had a little chat about the football we had come to see, until the referee emerged to conduct his inspection. He strode out and bounced the ball.

The ball didn’t bounce; it just splatted into the turf and remained there. He then kicked it, which resulted in the ball travelling roughly two metres before sloshing to a halt. And off the referee went.

My analysts and I stroked our chins and concluded that play couldn’t possibly take place that evening. Confirmation of this was surely imminent. Our senior producer sent a mayday signal back to ITV headquarters in preparation for us handing back to them to show something else. My three musketeers and I kept the audience informed and entertained with a discussion about when the match could be rearranged for; what the effect on the players would be, and so on.

Imagine our consternation when word reached us that the Polish ground staff were confident the match could start in half an hour’s time. At this moment, I broke into a sweat the like of which I’d never experienced outside a sauna or steam room. What on earth were we going to talk about? A few minutes were taken up with us agreeing that this was a ludicrous decision. We also did some wondering about why the retractable roof over the stadium hadn’t been in place to keep the rain out. Then, thankfully, it was time for a commercial break. My shirt couldn’t have been wetter if I’d been standing in the middle of the lake of a pitch, on to which the rain continued to hammer.

After the break, our colleague Gabriel Clarke interviewed a stadium official who professed confidence the undersoil heating would come to the rescue. For a few moments I chose to believe that the millions of litres of standing water would somehow be boiled off the surface so play could commence. This never happened.

Back in our studio, I was running seriously short of conversational material. In desperation, I tried to engage Roy in a discussion on the nature of rain. He glared at me as though he might drag me on to the pitch and hold my head under the water until I stopped asking him stupid questions. By now I was sweating so much that every time the camera cut away from me a towel was thrown in my direction. I dimly recall trying to get a conversation going about where we would go shopping for underpants if we had to stay on in Warsaw to present the rearranged match. Gareth, Lee and I dealt with that one. I chose not to involve Roy.

Eventually, mercifully, the authorities conceded there would be no football that evening. Our transmission, after two endless hours of ball-breaking blather, was brought to an end. Exhausted, we shambled back to our hotel in the rain.

The following morning the viewing figures were roughly what we would have got for showing actual football, and the audience even increased during the show as word of our plight got round. From this we have to conclude that the meanderings of four desperate men make viewing no less compelling than 22 men kicking a ball about. It’s a funny old game.

• Adrian Chiles is a Guardian columnist

• The opening line and standfirst on this article were amended on 8 September 2021 to reflect that the England match had not, at the time of writing, taken place.