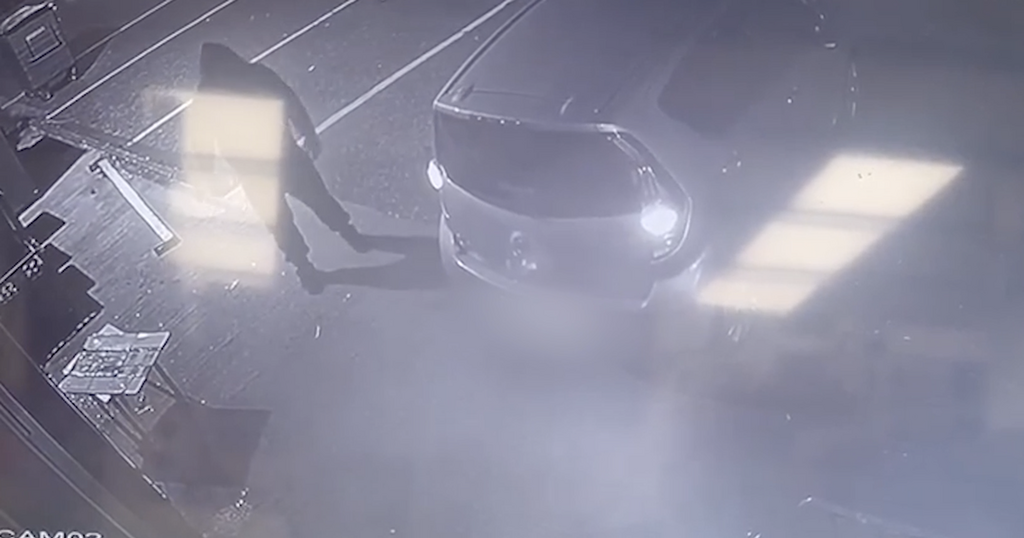 This is the shocking moment when callous would-be thieves rammed the shutters of a Scots shop before driving off empty handed.

Police have launched a probe after Continental Spices on Grange Road in Livingston, West Lothian, was targeted during a mindless attempted raid.

The thugs tried to break in around 10pm on Friday, September 3, before smashing through the front of the premises causing extensive damage then driving off.

The independent shop specialises in a wide range of spices, lentils, bakery, flour, rice, Arabic food, and halal meat - and bosses have estimated around £17,000 worth of damage was caused by the louts.

Owner Shahid Rasul told the Record: "We just want to know who it was and why they would do something like this - we want them caught.

"They were at it for a good half an hour. First they were at the door, but they never had the proper tools.

"Then they had the nerve to go back home and return with all their tools and start again.

"They picked up whatever they could from outside and broke the glass from the door. They tried to open the lock from the inside, but that wasn't opening.

"Then they came back with a crowbar and they tried the door again, before giving up."

It was at this point the thugs decided to ram the shop.

In the CCTV footage the two hooded men can be seen assessing the situation.

One enters the silver car, while the other stands and watches and points towards the building.

The vehicle's reverse lights turn on, before the car flies back smashing through the shutters.

The car then appears to be unable to go back any further - and at the point the other man leaps into the vehicle before they speed off.

Shahid said: "They drove into the shutter a few times but still didn't manage to get in because there was a lot of shelving that we had at that bit.

"So when they were reversing all those shelves fell down and blocked it so the car could not go any further back.

"After a good half an hour they finally just gave up and left.

"I don't know why they targeted us but we just hope they get caught. It has been reported to the police but if anyone has any information regarding this car please get in touch, it will be much appreciated."

Pictures taken following the incident show the extent of the damage caused by the thugs.

The bottom half of the shutters are completely bent back while stock and broken glass can be seen scattered all over the shop.

The thieves left empty handed and the shop was open, using the side entrance, the following day.

A Police Scotland spokesperson said: “Police are investigating an attempted housebreaking in Grange Road, Livingstone, where a car was deliberately driven at a shop front in an attempt to gain entry.

“The incident occurred around 10pm on Friday, September 3, 2021, and enquiries are continuing.”