Uvalde, Texas, US – Ten-year-old Auraleigha Santos focused on staying quiet on Tuesday morning as she hid near the auditorium at Robb Elementary school in Uvalde, Texas, while in a classroom on the other side of the building, an 18-year-old man carrying an AR-15-style rifle kept shooting, and shooting and shooting.

By the time the gunman had finished, 19 of Santos’s classmates and two teachers were dead, and 17 were injured, leaving a predominantly Latino community about 135km (84 miles) west of San Antonio in Texas deeply shaken, and a state and a nation asking, yet again, whether anything would ever change.

Just more than 24 hours after the mass shooting, the state’s most prominent politicians descended on Uvalde for a press conference where Greg Abbott, the state governor, laid the blame on “the status of mental health in our communities” and emphasised that restricting access to guns was not the solution to the problem of gun rampages.

The event was interrupted by Beto O’Rourke, a Democrat former congressman who is challenging Abbott for governor in November’s elections, who began shouting “You are doing nothing!”

O’Rourke accused Abbott and other Republican leaders of not doing enough to stop mass shootings. Last year, Abbott signed laws making Texas one of the most gun-friendly states in the United States.

The gunman, Salvador Ramos, lived in the Uvalde area, had no criminal record, and no history of a mental illness, according to state officials who say they have yet to find a motive for the shooting. Ramos purchased rifles legally the day after he turned 18, officials said.

When asked about gun control during his press conference, Abbott cited the gun homicide rate in Chicago, “I hate to say this, but there are more people who are shot every weekend in Chicago than there are in schools in Texas,” he said.

As Abbott spoke, many businesses in Uvalde were closed, and the mood in the community of about 16,000 people was sombre.

Outside the Uvalde Civic Center, Auraleigha Santos tightly gripped a teddy bear as she recounted her harrowing experience.

“I’m glad I didn’t get killed, but I’m sad my friend got killed,” she said.

Her father, Juan Santos, stroked her hair as she spoke.

“I never would have imagined this happening in this peaceful small community,” said the 29-year-old solar panel installer.

Alyssa Santos, 32, Auraleigha’s stepmum, recalled she had nixed a potential move to San Antonio because of safety concerns.

“And now this happened here, I just can’t believe it,” she said.

Alyssa Santos, who works in nursing, placed the blame for the shooting partially on the lack of adequate mental health care.

On Wednesday afternoon, several residents, including 21-year-old Diego Esquivel, walked around the town square holding signs with slogans such as “Prayers for Uvalde” and “Uvalde Strong”.

“I had to do something. I couldn’t sleep. It’s just so devastating,” Esquivel said.

“We should do more, but I don’t know what,” Esquivel added.

Robert Dennis, 56, works at Jack’s Steak House in Uvalde; he came to the town square to clear his mind.

“I’ve been a gun guy my whole life, I’m a second amendment guy, but this thing has me revaluating,” he said. “[The shooter] turned 18 and immediately bought assault rifles, that should have been a red flag.

“This is a community where people have historically left their doors unlocked. I imagine that will change,” Dennis said.

Supporters of gun ownership assert a right to bear arms under the Second Amendment of the US Constitution.

Mary Beth Fisk, the director of The Ecumenical Center in San Antonio, helped provide counselling for residents after mass shootings in Texas in Sutherland Springs in 2017, Santa Fe in 2019 and El Paso in 2019.

On Wednesday, she was in Uvalde with 15 counsellors from her organisation. They provided free counselling in the civic centre while several food trucks offered free food in the car park and several dozen people gathered, talking and hugging.

On Wednesday evening, thousands of residents, many donning maroon shirts – the colour of the Uvalde school district – attended a prayer vigil at the Uvalde County Fairplex, an event venue usually reserved for rodeos, bull riding and monster truck shows.

One woman, tears streaming down her face, carried a sign with a photo of her smiling granddaughter. “Rest in Peace, Nevaeh Bravo,” the sign read.

Some residents formed circles and prayed on the dirt floor of the venue. Besides a brief visit from Republican Senator Ted Cruz, who walked through the crowd and fielded a few contentious questions from the press about his opposition to gun restrictions, the crowd was subdued.

In the middle of the arena floor, a bearded man addressed a small group as residents laid hands on his shoulders. “Lord, let this tragic event bring us together and not tear us further apart,” he said. 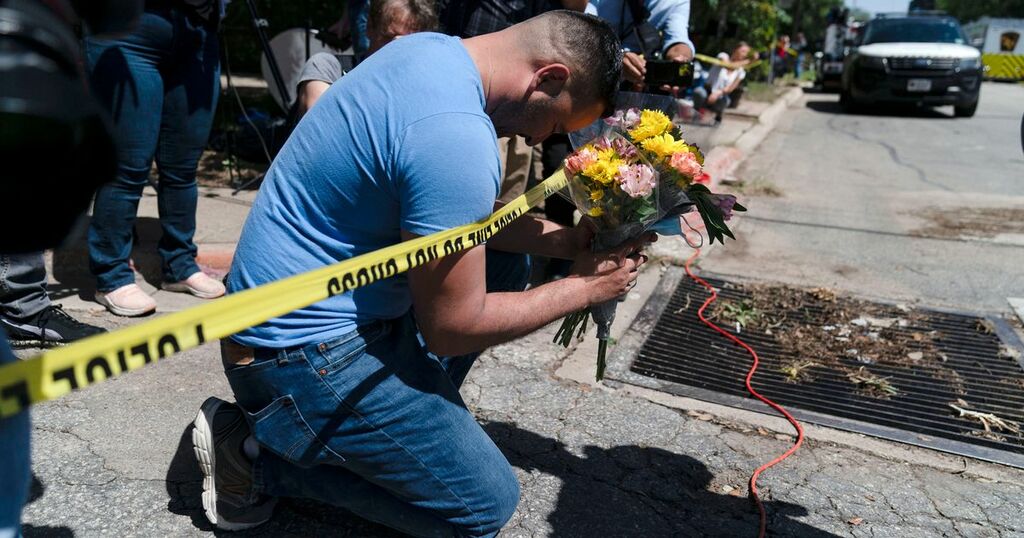 Manchester Evening News
One subscription that gives you access to news from hundreds of sites
‘Everybody knows everybody’: Uvalde grieves unthinkable loss after school shooting massacre kills 19 children and two adults

Church and community events were held on Wednesday, while funeral arrangements are beginning to take shape, Sheila Flynn reports from…

At least 18 children are dead after an 18-year-old gunman opened fire at a Texas elementary school, officials said.