A Marvel hero is only as good as their villain. Where would the Avengers be without Loki, or Loki without Kang? And as much as Jennifer Walters, the protagonist of She-Hulk: Attorney at Law, claims the opposite, she’s the new Marvel hero du jour. So who will she face off against? We already know: Titania, played by The Good Place star Jameela Jamil.

What you may not know is that the action-packed She-Hulk trailer featured our first glimpse of Titania, and she lives up to her name. From what we can see, she’s a larger-than-life figure who gives even the seven-foot Jennifer a run for her money. Here’s where you can catch a glimpse of her.

The She-Hulk: Attorney at Law trailer is already packed with cameos, the most notable being Jennifer’s famous cousin Bruce Banner. But mixed up in the montage of courtroom scenes is our first glimpse of Titania.

Right after Jennifer explains why she doesn’t want to be in the Avengers (as that’s for billionaires, narcissists, and “adult orphans for some reason,”) we see a figure in green that might just be Frog-Man, then a quick shot of Jennifer being woken up by Bruce with an airhorn, and then Titania bursting through the courtroom wall at around the 1:24 mark.

In the comics, Titania is born as Mary MacPherran, an unassuming girl from Denver, Colorado who dreams of becoming a superhero. Through a bargain with Doctor Doom, she’s infused with alien technology and given the remarkably Hulk-like powers of superhuman strength, upon which she deems herself Titania, the female counterpart of Titan.

It’s clear this aspect of her character survived the adaptation into live-action, despite the look of the character drastically changing. Titania certainly makes an impression in her fringed bodysuit, leggings, and gold-trimmed jacket, and while that’s completely different from the outfit she wears in the comics it’s certainly evocative of the 1980s, when she was first introduced into comic canon.

The Invers Analysis — Though this is a huge reveal for comics fans, the shot lasted less than a second and showed little beyond Titania’s aesthetics. Still, knowing that Titania pays visual homage to her comics roots suggests we’ll see a more comic-accurate villain than we got with Dr. Arthur Harrow in Moon Knight.

Hopefully the next trailer will confirm this by letting us hear Titania speak. As Jameela Jamil is British actress, her accent will be another clue as to whether Titania’s middle America backstory remains intact. Either way, she looks like a tough rival for She-Hulk. 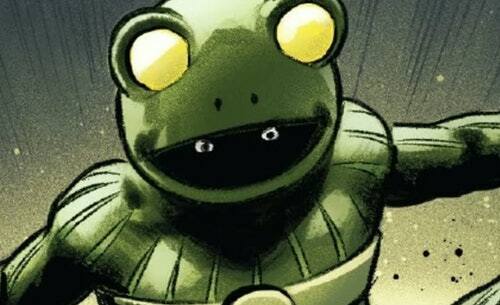 Frog-Man? 'She-Hulk’s' obscure Marvel comics hero, explained
The first teaser trailer for 'She-Hulk: Attorney at Law' features a brief cameo from none other than Frog-Man. Here's what…

And we love to see it.