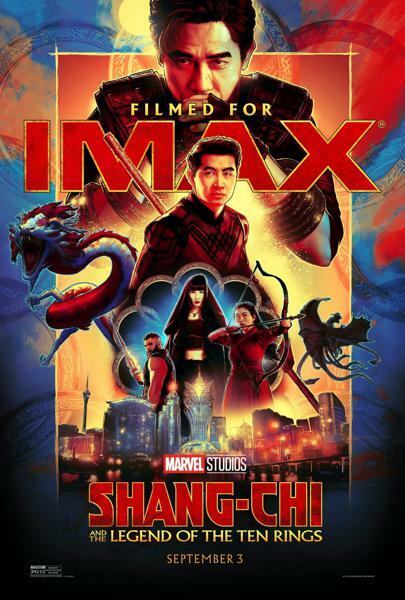 As Marvel’s blockbuster superhero-fantasy film Shang-Chi and the Legend of the Ten Rings (read my full review here) sets Labor Day box office records, attention has been on the film’s ability to overcome Covid fears and boost theatrical revenue. However, amid all of this discussion and debate is a linger question nobody seems willing to ask: are theaters possibly costing films revenue by refusing to implement stricter Covid precautions and by lobbying against such public health measures?

First of all, whatever you or I think about the idea of sitting indoors with hundreds of other people — many of whom are surely unvaccinated — eating and drinking and sharing the same air, the fact is Shang-Chi and the Legend of the Ten Rings blew the doors off the previous Labor Day weekend box office records with a $94 million domestic haul (three times the previous Labor Day record-holder, 2007’s Halloween), and more than $150+ million in total worldwide receipts.

So Shang-Chi is a terrific hit at the blockbuster level — and a critical hit, and beloved by audiences — period.

Now, might it actually have been possible to make even more money if theaters had widely adopted good Covid practices including proof of vaccination (as New York does, which is why most of the biggest theater grosses came from theaters there), masks and social distancing during screenings, and installing air purifiers and UV to further protect the public during a surging global pandemic that’s killed nearly 700,000 citizens in our country and more than 4.5 million worldwide?

The answer is probably yes, Shang-Chi and many other films probably could’ve made a lot more money if those types of safety practices had been invested in by theater owners, instead of investing in PR campaigns to resist city and state lockdowns and regulations, and instead of trying to convince the public to save theater industry sans stricter pandemic precautions even if it endangers our lives.

If that comparison seems harsh, it’s still accurate. If places like New York didn’t require vaccination proof before attending theater screenings, do you think theaters would implement those policies themselves? The industry’s resistance to stricter regulations and lockdowns should probably tell you the answer to that question.

My point is this: Theaters themselves may play a role in reducing the longterm box office totals for Shang-Chi, and for every other film releasing into the marketplace amid this nearly two-years-and-counting pandemic. There’s a reason almost 1/5 of movie theaters worldwide are closed, and there’s a reason a large portion of the public remains unwilling to risk returning to movie theaters while Covid burns through populations of many states — especially states that don’t implement restrictions and regulations about reopening indoor venues like movie theaters, hint-hint.

So if we are going to continue arguing about whether the pandemic plays any role in reduced theatrical attendance (of course it does, no matter how much certain entertainment journalists play the role of de facto publicist to spin data for theaters), or whether day-and-date streaming (and very short theatrical windows ahead of streaming premieres) are the true evil scourge responsible for all of the lowered theatrical attendance, then we better also start talking about how much theater owners themselves are cutting into potential box office with their poor decisions about public health and relationships with studios.

Shang-Chi obviously benefited at the box office from the fact it wasn’t also available yet on streaming, though, so it’s also pointless to ignore streaming as a factor that is particularly enhanced during a pandemic. If you’re already reluctant to go to theaters, then having an at-home option instantly available certainly makes that calculation easier — especially if you have children, since protecting kids from catching Covid and also paying a lower price for your entire family to see the film at home is a potent one-two punch to the heart, brain, and wallet.

But streaming is not the biggest factor in this. Covid is, especially for those aforementioned families who aren’t going to just treat their children’s and spouse’s lives as worth risking on behalf of theater chain profit margins and stock prices. The more unsafe theaters appear to be in terms of health risks, the better streaming is going to perform. Cost-benefit analysis and risk analysis in this case are pretty easy, especially when the news is daily running footage of children on ventilators in ICU and schools are reporting tens of thousands of children infected after schools reopened.

I anticipate Shang-Chi will probably hold pretty well and top at least $350+ million worldwide, as it’s the first blockbuster Marvel movie to hit theaters exclusively and at a time when vaccination mandates are about to take hold in other key regions, including Southern California (which accounts for a sizable share of total box office). The safer people feel attending a theater, the more likely they are to see it as one of the opportunities to actually go out and have fun during the pandemic without much fear for themselves, their families, or those around them.

Of course, more cities and states would also need to pass and strictly enforce vaccination card mandates, so all of this is tied to other aspects of society, because in a crisis of this sort that’s how things work and the only way things get fixed.

For myself, I am refusing to attend advance screenings in person, and will not attend any regular theatrical screenings when films open, except for the singular situation in which I saw Shang-Chi. My good friend Sean Gerber (host and producer of the MCU Fan Show) rented an entire theater and invited a small number of family and friends who are fully vaccinated and take serious precautions against infection. We all sat apart (socially distanced), we wore masks, we didn’t eat food during the screening, and the private theater screen had extra Covid cleaning.

Even with that comforting level of safety, I’m still going to limit how often I’ll go to private screening events, to further reduce the odds of any potential of contracting or spreading Covid (or flu, since that’s also a thing and right now hospitals are already pushed to the brink).

I love theaters, I’ve said many times in this space that they have played a pivotal role in my life and I believe theaters will always exist as part of our pop culture experience. But right now, public safety matters too much, and this world is still suffering and in a dangerous place — only 28% of the global population is fully vaccinated; 86 thousand people per week are hospitalized in the U.S. due to Covid; and more than 4.5 million people have died worldwide, including 650,000 dead in the U.S.

Those facts are entirely separate from how any of us feel about movie theaters, or our wish-dreams for things to return to normal, or our dangerous temptation to act as if things are normal because we are tired and scared of continuing to live in this forced limbo — forced, I say, because we are stuck here precisely because too many people refuse to take the right, sane, moral action of getting vaccinated and wearing masks, and because of businesses that prioritize profits over the safety and survival of their clientele. No amount of loving movies and theaters will magically erase Covid or save businesses from themselves if they refuse to do what’s right and necessary.

If theaters want to be open and treated as viable, safe options for entertainment, then they need to rise to the occasion and take the needed precautions willingly, and help bang the drum in favor of not only vaccinations but also restrictions on who can attend theaters. Spread the word, including the above data, and be able to point to significant steps taken to ensure theaters won’t contribute to those horrifying statistics.

This is actually relatively easy to do, although it would take some upfront investment by theaters but they could potentially even ask studios to help with some of the costlier remodeling if necessary — remove a portion of seats from screening rooms, install air purifiers in each screening room, install UV lights to occasionally turn on and off for several seconds, and most importantly require proof of vaccination and mask-wearing everywhere in the theater. Make ticket purchases and concessions entirely self-serve (this largely means self-checkout kiosks and vending machines), with just a few security guards to keep crazy infected people out and to enforce mask-wearing and social distancing.

In that environment, I am convinced theaters could reopen and sell out most screenings for the next several months, studios could put all of their shelved content out, and it would be a massive fall/winter boon for studios and theaters — and for the emotional health of a lot of people eager to return to theaters but unwilling to contribute to endless pandemics or reward wrongheaded behavior from corporations.

Safety restrictions in key locations, rising vaccination rates, and the combo of those two factors at the same time a new Marvel film arrives in theaters is more than enough to ensure Shang-Chi is a hit, even if we all realize it cannot achieve pre-pandemic MCU box office levels at this time — no film can, unless and until vaccination rates are much higher and Covid safety protocols including mandatory vaccination cards are implemented widely.

In our present situation, Shang-Chi’s box office success is relatively equivalent to other high-opening Marvel solo releases (as opposed to Avengers films/team-ups) that topped $700+ million. Whatever else we feel regarding Covid and theaters in general, this is indeed a big win for Marvel and Shang-Chi. And even outside of a pandemic situation, Shang-Chi’s final box office will still make it a record-shattering blockbuster.