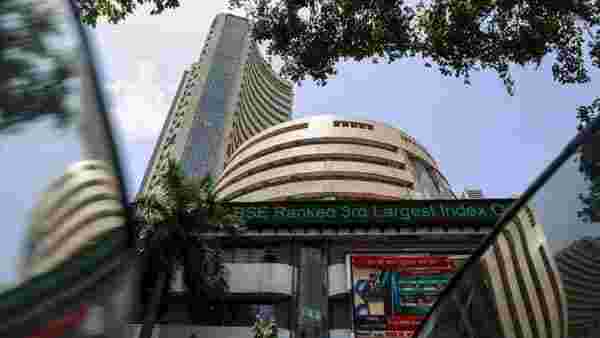 Benchmark indices witnessed sharp gains today as cooled off energy prices ebbed fears of a stagflation in the global economy.

Crude oil prices fell from multi-year highs reached the day before, while US Treasury rates and key currencies remained stable amid the calmer tone.

Tata Motors and Titan were among the top gainers today.

ONGC and Dr. Reddy's Lab, on the other hand, were among the top losers today.

The BSE MidCap index and the BSE SmallCap index ended up by 1.7% and 1.4%, respectively.

Sectoral indices ended on a positive note with stocks in the realty sector, consumer durables sector and auto sector witnessing most of the buying interest.

Oil & gas stocks, on the other hand, witnessed selling pressure.

US stock futures are trading on a positive note today with the Dow Futures trading up by 172 points.

In news from the retailing sector, Titan was among the top buzzing stocks today.

Titan became the second firm in the Tata group to hit the market capitalisation of ₹2 Tn after Tata Consultancy Services (TCS).

Titan shares surged today after the company said it witnessed a strong across-the-board recovery in demand after the second wave of the pandemic.

Most stores are now fully operational barring a few in select towns, having localised restrictions, with overall store operation days exceeding 90% for the quarter.

Apart from its thrust on the digital channel, Titan has accelerated its retail network expansion during the quarter.

In terms of revenue, in the jewellery segment, which contributes a larger portion of its turnover, it has reported 78% growth in quarter two of the financial year 2022 compared to the same period last year.

The demand postponement triggered by the second wave of the pandemic in avenues like gift purchases, occasions, milestone buying, weddings, investments in gold etc. witnessed a strong comeback in quarter two.

Both plain and studded segments grew in double digits, however, much stronger growth in the plain segment led to studded mix being below pre-pandemic levels.

According to Titan, now digital gold is a new pilot offering that helps customers purchase gold online and lock in the gold prices with an ability to convert it into jewellery at a later stage.

The early response has been good with the enrolment of many digitally-savvy young customers. The Golden Harvest Scheme (GHS) enrollments have surpassed the pre-pandemic levels.

In watches and wearables, its revenue was up 73% compared to the July-September quarter of the previous fiscal.

In eyewear, Titan's quarter two revenue was up 74%. It added 24 new stores in the quarter.

Its other business segment, which includes - Taneira, Fragrances and Accessories, reported 121% growth during the quarter.

Speaking of stocks, here's a pattern that if you see, you must sell your position. After all, exits are more important than entries.

In the chart below, we can see the head and shoulder pattern - the stock goes up, makes a high, falls a little bit, goes up to a higher high, does not make a higher low, rallies again, fails to make a new high, and then starts to break down.

This usually happens in a situation where a stock or index has typically been in a bull trend for a while. Spotting this correctly can help you save money.

Moving on to news from the IPO space…

India’s Paytm is in talks with sovereign wealth funds and financial firms to become anchor investors in its upcoming initial public offering (IPO), according to people familiar with the matter.

State-backed wealth investors Abu Dhabi Investment Authority and Singapore’s GIC Pte are among those weighing bidding to participate in the IPO.

Global financial firms such as BlackRock Inc. and Nomura Holdings Inc. are also in discussions to bid, according to the sources.

One97 Communications, as Paytm is formally known, is considering seeking a valuation of around US$20 bn to US$22 bn based on initial investor feedback, they said.

There are already more than enough bids to cover the shares allocated for anchor investment in the IPO.

Paytm, backed by SoftBank Group Corp., Berkshire Hathaway Inc. and Jack Ma’s Ant Group Co., plans to raise as much as ₹166 bn from its share sale, according to its draft prospectus.

How the IPO sails through remains to be seen. Meanwhile, stay tuned for more updates from this space.