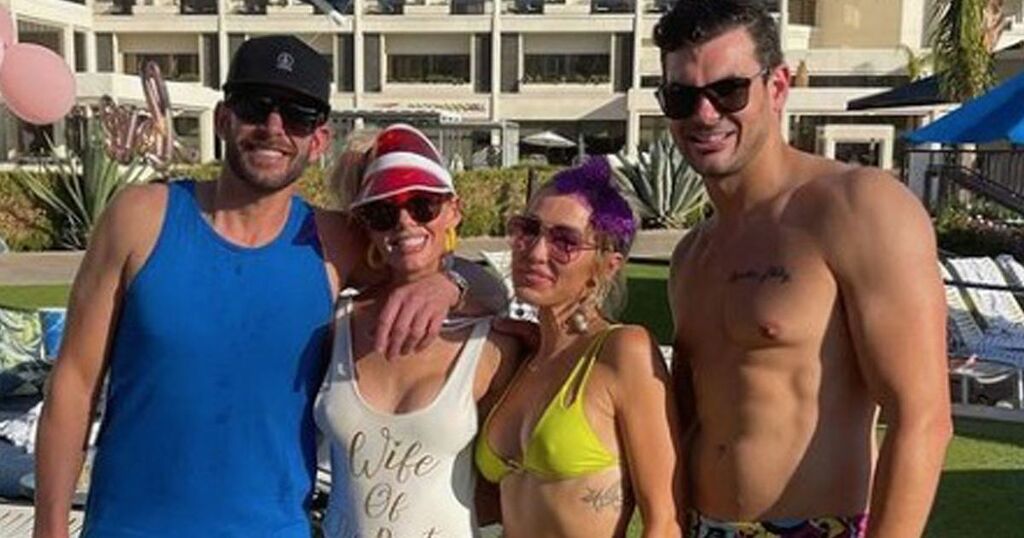 Selling Sunset’s Heather Rae Young had the time of her life this weekend with an 80s themed bachelorette getaway - but some of her Netflix co-stars were noticeably absent.

The real estate agent and her fiancé Tarek El Moussa held a joint bachelor and bachelorette party in California’s Desert Springs, in a hen and stag that was certainly fit for the stars.

Spending their days partying and drinking cocktails by the pool, the lovebirds made sure their nearest and dearest were with them - and wearing as much neon as possible.

Starting off the weekend with a far more suave and sophisticated evening of fine dining, Saturday morning was where the real fun began with Heather, 33, crimping her hair and pulling it up into a high side ponytail before adding a sun visor.

Completing her 80s throwback, Heather wore neon pink sweatbands and socks and a matching pink bumbag over a swimming costume that read ‘wife of the party’.

Sharing photos on Instagram, Heather is clearly beaming as she dances with her husband-to-be, parties with her girl squad and catches a tan.

In a collection of photos of the weekend, she wrote: “80’s baby!! Cheers to most fun, love filled weekend. Having the time of our lives with our people and my person, [Tarek].”

Among the revellers was her Selling Sunset co-star Mary Fitzgerald and her husband Romain Bourret, who also shared updates from the wild weekend on their Instagram Stories.

However, her weekend was missing a lot of familiar faces - particularly co-star Chrishell Stause, who declared her “the cutest” in a sweet comment underneath the photos.

Chrishell, who is now dating business mogul Jason Oppenheim, is currently on the other side of the US for New York Fashion Week.

Other stars of the show, including Christine Quinn, also weren’t in attendance.

Selling Sunset season four was confirmed by Netflix back in May and the cast have been busy filming, but a release date has not yet been announced.

The cast is also set to get bigger with two new additions to the real estate firm - Vanessa Villela and Emma Hernan.

According to Netflix, Vanessa is a “Mexican-American novela star turned real estate agent”, while Emma is “an entrepreneur who has an interesting history with the ladies”.

So get ready for some more drama.

It’s also not been confirmed whether or not Heather will follow in the footsteps of her co-stars and have cameras be present at her wedding.

Romain and Mary’s wedding was shown in season two, while Christine’s $1million ceremony to tie the knot with Christian Richard aired at the end of season three.

Selling Sunset seasons 1-3 are available to stream on Netflix now.