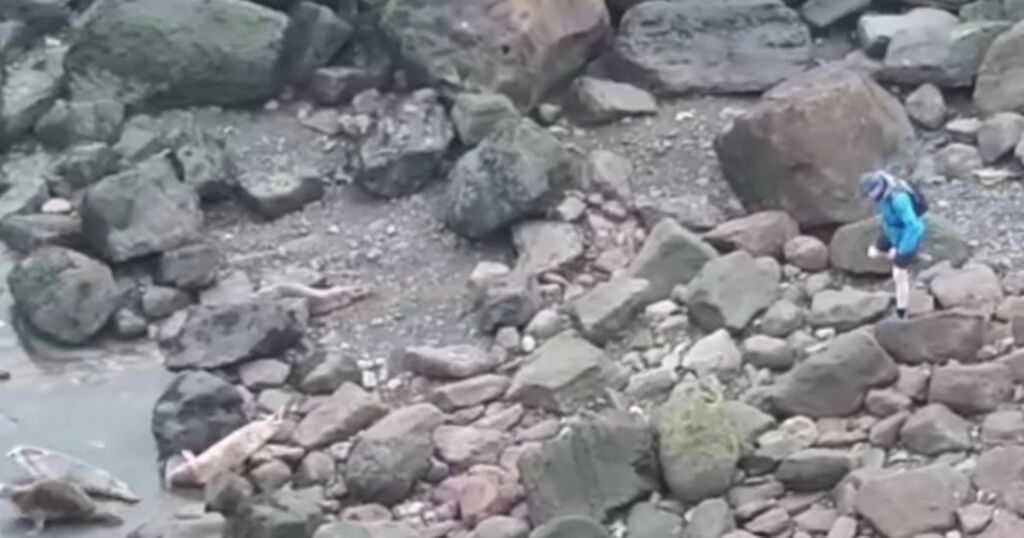 A selfish runner started a horrifying stampede of more than 100 seals on a Yorkshire beach causing fears some could be left dead.

A wildlife group said the man's actions could be a death sentence for many of the creatures involved as footage was released of the incident.

It follows the deaths of many seals caused by holidaymakers disturbing them to take “selfies” over the summer.

The man reportedly insisted on heading for the seals and ignored the pleas of wildlife volunteers.

He was filmed standing with his hands on his hips watching the terrified seals try to flee.

Though the seals were trying to get away from him, he kept on moving towards them, and appears to deliberately chase them to get them to run away.

The incident was recorded near Robin Hood's Bay, North Yorkshire, on 6 January and shared by volunteer organisation The Yorkshire Seal Group.

The group said the man swore at seal stewards who tried to intercept him and moved towards the animals "with haste" causing them to stampede.

The spokesman added: "Whilst the majority of Yorkshire coast residents and visitors are polite and supportive of our work, our seal stewards unfortunately still deal with an ignorant and abusive minority who disrespect our shores and iconic wildlife.

“The runner shown in this video was engaged by our stewards at one of our sensitive sites to offer advice on how best to access the shore to minimise disturbance to the hauled-out seals.

“He stated ‘I am not interested and you can f**k off’. He proceeded to the intertidal zone with haste causing a severe stampede of over 100 resting seals some of whom were pups and still maternally dependent.

“This level of disregard and lack of ocean literacy undoubtedly caused numerous injuries to the fleeing seals and may take the life of some of our pups who have suffered horrendous mortality rates following storm Arwen already.

“All the seals impacted by this disturbance event would have, at the very least, depleted their energy reserves escaping the threat, and did not return by the end of the day including mothers that were weaning pups.

“The runner was last seen running on the beach at 10.50 on the 6th Jan moving in the direction towards Boggle Hole and Robin Hoods Bay.

“We ask all our supporters to share these sorts of posts to raise awareness as to the plight of our iconic seals and in a bid to identify the individual for police to follow-up, business owners may have CCTV of the runner within the town. Your support is greatly appreciated as always.”

The footage has been widely shared on social media and attracted hundreds of angry comments.

One said: “I’ve got actual palpitations watching this. What an utterly empty soul this aggressive, abusive and dangerous person must have.

“From his beyond disgraceful and abhorrent behaviour and reaction to the 100% Volunteer Stewards attempt at positive engagement, to the very last second of that injurious and terrified stampede.

“The damage won't cease when he's gone. It's already done and will reverberate extremely significantly for an untold amount of time won't it.

“It was heartbreaking, beyond despicable and 100% avoidable and completely unnecessary.”

Another wrote: “This is terrible. As a runner myself , I would never dream the disturbing seals.

“My family lived in the area for years, so I know where the seals are, but i don't tell anyone who asks purely so that they don't go and disturb them.What idiot.”