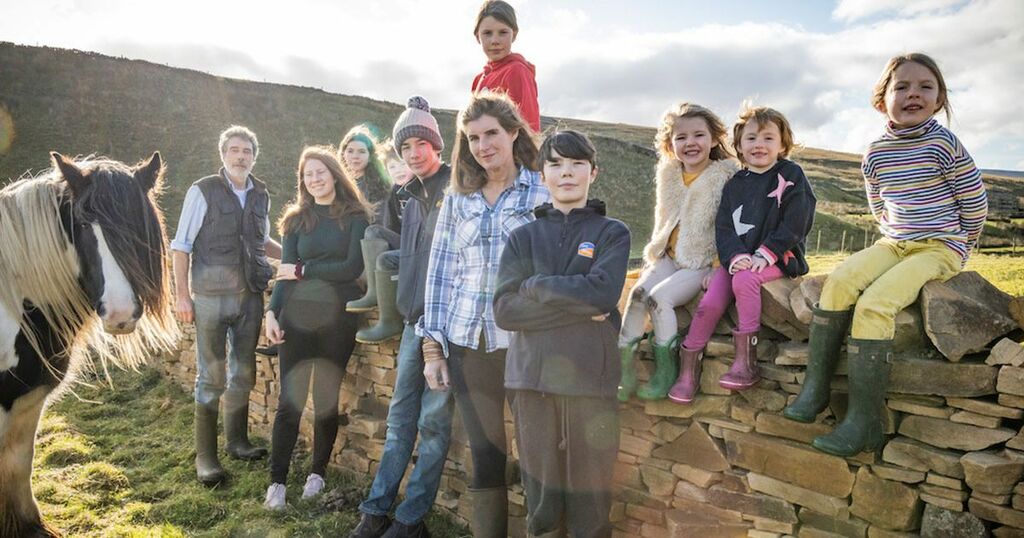 Our Yorkshire Farm is one of Channel 5’s best-watched shows, as viewers tune in every week to catch up on the day-to-day lives of Clive and Amanda Owen, and their nine children at Ravenseat Farm.

The couple shot to fame in 2011 after appearing on the ITV series The Dales with Ade Edmondson, and after being featured on Julia Bradbury’s Coast to Coast, as well as New Lives In The Wild with Ben Fogle, the Owen family finally landed their own show in 2018.

Despite their idyllic life in the rolling countryside of Upper Swaledale, the show has been hit with family drama, unexpected deaths, and the effects of lockdown.

The Owens have a huge brood of nine children, but little is known about Clive’s children from his first marriage, which ended in 1995.

The farmer split from his wife after 13 years, and she took their two children - Rosie, then nine, and her 11-year-old brother - to live in Kirkby Stephen in Cumbria.

Rosie, now 34, recently revealed she rarely speaks to Clive, or her step-mum Amanda, and said her relationship with her dad drastically deteriorated when he met the young shepherdess back in 1995.

She told The Sun she can barely watch her dad’s hit TV show as it brings back heartbreaking memories of her childhood spent on the farm, and lasted five minutes before bursting into tears and having to switch the telly off.

“It breaks my heart because it is like watching a past that I haven’t been in for years. It’s like a family that I’d love to belong to but I just don’t,” Rosie candidly shared.

She also revealed that dad Clive almost missed her wedding in 2018 as it clashed with filming, and turned up just in time to walk her down the aisle, but then left straight away.

Eventually Rosie, who is mum to two children, stopped visiting Ravenseat Farm, and she claimed her dad hasn’t asked why she no longer visits.

“They are living this wonderful life with all this success and I’m here with scars that run deep,” she fumed.

Amanda has been open about the difficulties of running a farm and filming a hit TV show, while also being mum to nine children.

The shepherdess, 46, confessed it was a struggle sometimes, and admitted she needs a break as she’s always in demand.

“Oh gosh, there's always someone screaming at me,” she told the Daily Express. “I’m never still, I'm always walking about and my mind is like a browser window with tons of tabs open.”

Amanda said once she’s out of the farmhouse, she’s “untouchable”, and retreats to a secret spot on the farmland to be free from technology and have some much-needed “headspace”.

Even though he’s one of the most famous faces on Channel 5, Amanda’s husband Clive isn’t keen on being in the spotlight, and has actively avoided being on social media.

The mother-of-nine regularly posts updates in Instagram and Twitter, giving fans and followers another glimpse into her life at the farm, but Clive is always absent from her snaps.

She was confronted by one follower on Twitter back in August, after she shared snaps from her trip to the hairdressers, and was asked why Clive was mysteriously absent from her ‘life’ on social media.

“How come we never see photos of Clive, time for him to have a make over as well, he bloody earns it,” one follower fired.

“He hates social media and the online news stuff and doesn’t want to be on it,” Amanda replied. “That’s his choice.”

Amanda and Clive are regularly up against the harshest weather conditions on their remote farm in Yorkshire, and the shepherdess revealed they almost lost some of their sheep in the snowy conditions earlier this year.

Desperately trying to locate a number of animals who were buried in the deep snow on the farm, the couple decided to use a drone to find them, but the cold snap destroyed their chances of finding the sheep with technology.

“Actually we did attempt drone footage previously during a particularly brutal weather spell,” Amanda told her followers on Twitter.

“The wind chill was -15, the drone fell from sky as it froze mid-air, landing in the deep snow saved it from being irreparable,” she explained, later adding that they found the sheep once the snow had melted.

While viewers enjoy following Amanda and Clive on the telly, it’s often forgotten that the couple live on a working farm, and put their heart and soul into keeping it going.

During the first Covid-19 lockdown in 2020, the couple were hardly affected by the restrictions, as they were already busy with lambing season on their remote farm.

However, they rely on visitors and tourists to the farm to increase their income, but as the whole of the UK was told to stay at home, Amanda revealed they felt the impact.

“I guess once we finished lambing and we’d normally be expecting visitors and tourists, of course, they never came,” she explained during an appearance on BBC Breakfast.

“That was when it became clear and obvious that things had changed, so it was a strange time - it was isolation on top of isolation.”