A second man has died in the space of a week from injuries sustained in a protest-related clash in Hong Kong. The death came after China’s president, Xi Jinping, issued his harshest warning yet to the city, saying it urgently needed to “end violence and restore order”.

A 70-year-old cleaner who is thought to have been hit by a brick during a clash between protesters and pro-Beijing residents died late on Thursday, hospital officials said.

His death came less than a week after a student protester who had fallen from a building died from his injuries. Since then, the level of violence at the proteststhat began five months ago has reached new heights.

On Monday police shot a 21-year-old student in the stomach at close range and a 57-year old man was set on fire while arguing with demonstrators. A 15-year-old boy is in a critical condition in hospital after he was hit on the head with a teargas canister on Wednesday.

Xi, speaking at a summit in Brazil on Thursday, said “persistent radical and violent crimes” had “seriously trampled on the rule of law and social order” of Hong Kong, the state news agency Xinhua reported.

The president pledged Beijing’s support for Hong Kong’s police, its judiciary in punishing “violent criminals”, and its chief executive, Carrie Lam. “Stopping the violence and restoring order is Hong Kong’s most urgent task at present,” he said.

As he delivered his remarks, demonstrators in Hong Kong were burning a Chinese flag, blocking roads and throwing petrol bombs at riot police, who responded with teargas, on a fourth consecutive weekday of unrest.

Student protesters barricaded themselves inside universities, in some cases building makeshift walls across roads and stockpiling bows and arrows, molotov cocktails, catapults and other homemade weapons.

Students from Europe, mainland China and Taiwan were leaving the city as several universities cancelled classes for the rest of the semester. The education bureau has suspended all classes in primary and secondary schools from Friday to Sunday.

Police described the Chinese University of Hong Kong as a “weapons factory and an arsenal”. Ch Supt Tse Chun-chung told a briefing that the campus protests were “another step closer to terrorism”.

The protests began in June over an extradition bill that would have allowed suspects in Hong Kong to be sent to mainland China to be tried. The bill, which has now been withdrawn, became a lightning rod for dissatisfaction over Beijing’s growing influence over the city, and the protesters’ demands have since become much more broad.

After five months of filling the streets week after week, their calls for genuine democratic suffrage and an independent inquiry into police brutality have become one of the most serious challenges to Xi’s authority since he took power in 2012.

On Monday Lam described the protesters as “enemies of the public”. Hong Kong police have been heard referring to protesters as “cockroaches”, while Beijing and Chinese state media has blamed the demonstrators for wreaking “chaos”. That word that was also used by official press to denigrate the 1989 protests in Tiananmen Square, which were violently crushed with thousands of lives lost.

“That combination of dehumanisation and claiming that protesters have done things that the authorities don’t just feel are incorrect but completely beyond the pale, that has disturbing echoes from the past,” said Jeffrey Wasserstrom, a historian of modern China at the University of California, Irvine.

“In the Hong Kong case now it sometimes seems as though the police are placing a whole generation – youths in their teens and early 20s – into the category of people who can be treated in brutal ways.”

• This article was amended on 15 November 2019 to specify that the two deaths have happened in the space of a week. 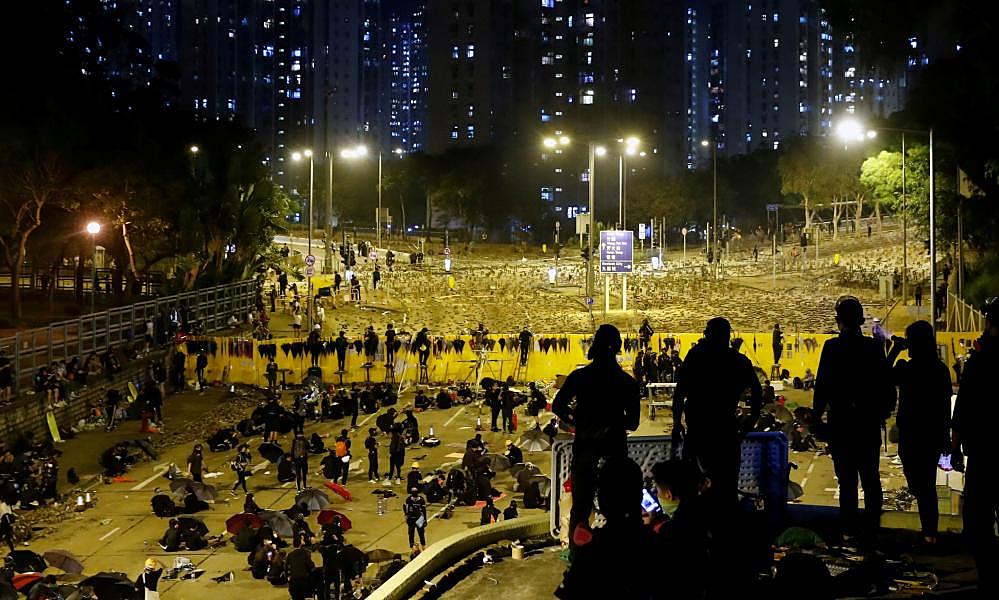 Some accuse government of stoking unrest as pretext for delaying elections

The Guardian - UK
Trudy Rubin: Carrie Lam and Xi Jinping could defuse Hong Kong's rising tension by listening to protesters
HONG KONG _ Visit Hong Kong these days and you view a Greek tragedy in the making. This tragedy, encouraged…