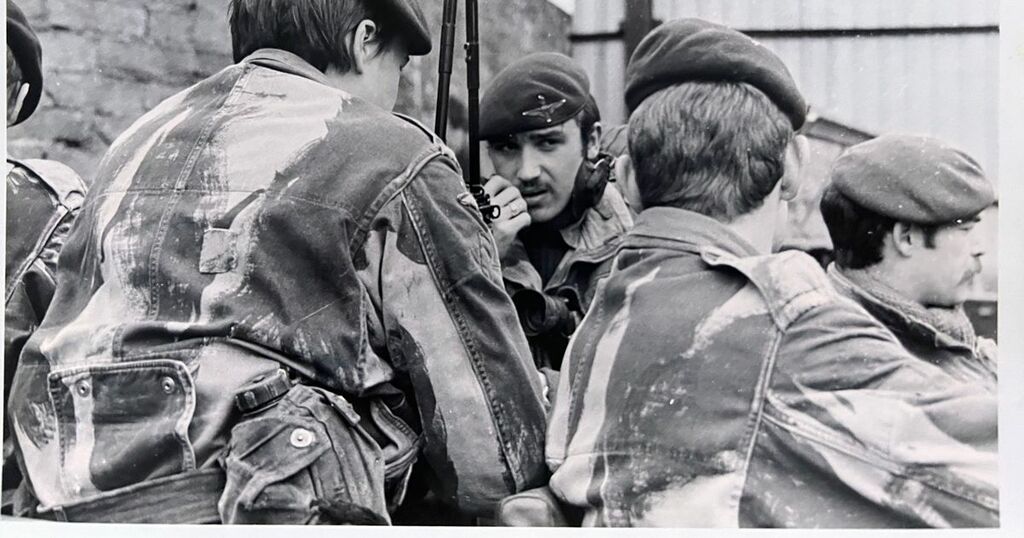 A Falklands combat veteran remembering 40 years since the war plans to write a book on Paisley’s Paras.

Major Tam Noble was a fighting man with the Parachute Regiment himself and had left Paisley to see the wide world.

He was a young corporal among an elite band of young men who took a key peak on the islands after being thrust into war from the front of a landing craft.

His bravery capturing Mount Longdon with 3Para earned him a Mention in Despatches for Gallant Service.

In June, he will travel to the former Para stronghold of Aldershot, where he is on the committee arranging the 40th anniversary of the deadly conflict with the Argentines.

His new mission is to shine a light on Paisley and promote its heroes with the maroon beret who fought for Queen and country is various conflicts and secret operations.

Tam revealed: “My initial research has uncovered 12 Paras from Paisley, including myself.

“But I think there is more and I am keen to find them with the help of the Paisley Daily Express.

“Their stories will be told in the book, which I hope to get published next year.”

The Paras are the British Army’s elite airborne infantry, despatched to hotspots all over the world.

Major Tam revealed one of his old comrades James ‘Ned’ Kelly, who was from Paisley, has recently died.

He said: “Ned was an inspiration, a tough, hard soldier. Paisley was very good at producing these.

“Other names who have been coming out the woodwork, like Crawford, Robertson, Brown and Baillie.

“I just want these Paisley guys to tell their own stories.”

When Tam won his commission as an officer, top brass wanted him to use the name Thomas, but he insisted he wanted to be Major Tam Noble.

He said: “Everyone knew me as Tam. I refused to let them change it. I was even Tam back in Paisley all those years ago.”

Tam is Johnstone born and was brought up in Foxbar Avenue, Paisley, where he attended Camphill High.

He said: “I headed off to the army at the age of 16 and the only job I had in Paisley was in the Co-op department store in the High Street.

“I was working in carpets and beds and got fed up with that and just wanted to do something more.

“So I headed to the recruitment office Glasgow and signed on to take the Queen’s shilling, getting terribly drunk in the pub afterwards.”

“I have had a fantastic career and never looked back. In a way I wanted to get out of Scotland.”

He was back in Paisley in November to visit his sister Maryanne Wilson, who lives in Dykebar.

Tam was followed into the Paras by his son Jonathan, who was given the middle name Longdon after the Falkland hill they took.

Jonathan was such a skilled soldier he was headed for the SAS, before an off duty car crash 17 years ago left him paralysed from the neck down.

Tam regards the Falklands in 1982 as the last old school war, no advance operation, but a rapid boots on the ground landing and a run to the enemy.

It’s still a clear memory and he says: “The Paras and the Royal Marines sailed to the South Atlantic on board the cruise ship Canberra and then things become horrendous.

“3Para were moved to an amphibious landing ship called the Intrepid in case we took an Exocet missile.

“We had to go down nets in the dark with heavy backpacks, then into the boat downstairs in corridors.

“We were shut down inside and I asked a navy guy what would happen next, he said if we get hit you lot won’t be coming back up.

“How frightening is that?”

It still rubs that there was never any help for soldiers in previous days who suffered what is now known as post traumatic stress disorder.

Many men took their own lives in the years following the Falklands, and Tam said: “It was hard fighting for two or three months with an enemy we didn’t know.

“We came back and were left on our own. I was lucky and was married and my wife got me through it, but many of the guys had nobody.”

After he left the regular army, he became a Lieutenant Colonel with the United Arab Emirates’ armed forces before returning to the UK where he become a reservist.

It is perhaps no surprise he still has military links, working with foreign forces who need to use UK defence training facilities.

●Do you know a Paisley Para? Send the details to nobleairborne@yahoo.co.uk