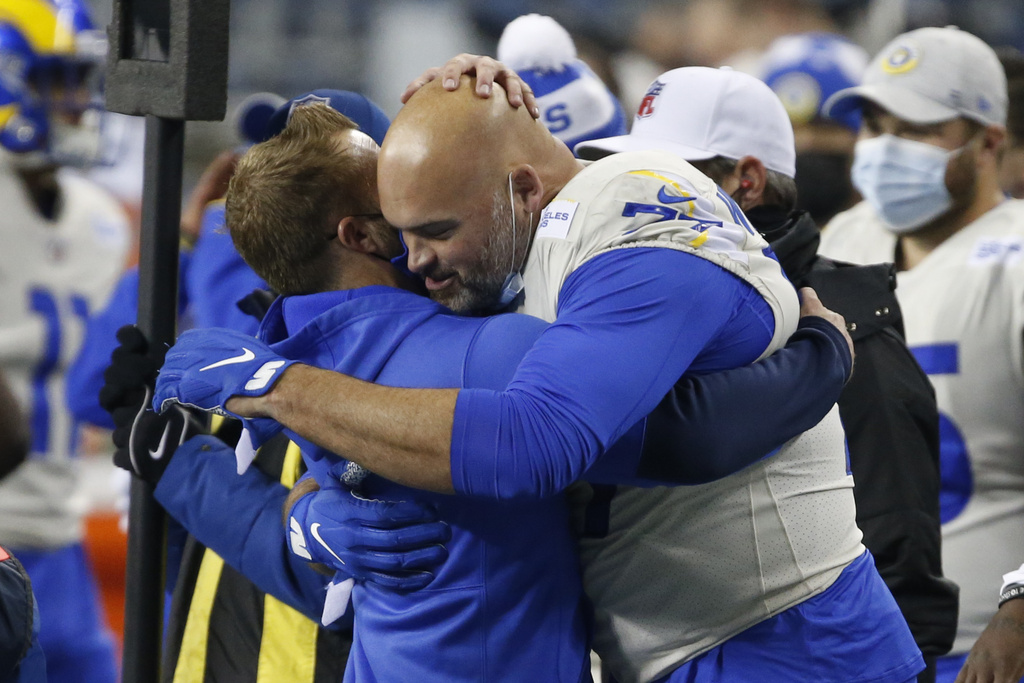 The Los Angeles Rams have a unique roster in the way it’s constructed. It can be described as top-heavy, considering they have some star veterans in Aaron Donald, Jalen Ramsey and Matthew Stafford, but also an abundance of lesser-known, younger players who will play key roles, even if they’re not household names.

And despite having Stafford, Andrew Whitworth and DeSean Jackson, who are all over 30 years old, the Rams still have the youngest roster in football as of May.

As important as the younger players are, Sean McVay knows the value of having veteran leaders on the team. So when he was asked Wednesday what the best thing about the Rams’ roster is, he pointed to that leadership.

“The best thing, I think it’s probably our veteran leadership. I feel really good about those guys, guys that have played a lot of football,” he said. “I think the best sign of great leaders is they bring people with them. And that’s what you’re seeing from Aaron Donald, from Jalen Ramsey, from a young player in Jordan Fuller. That’s what you see from Johnny Hekker on special teams, Matthew, Andrew, Cooper (Kupp), Robert Woods – all those guys that you see are our captains. They bring people with them and there’s a lot of other guys that I can name as well, in addition to our coaches. But that would be the best thing that I feel about our team right now.”

The Rams have eight captains this season, with four on offense, three on defense and one on special teams. All of them are critical to the success of the team on the field, but they’re also vital parts of the locker room.

DeSean Jackson, Leonard Floyd, Austin Corbett and Tyler Higbee could also probably be included in that group, too, being guys who consistently help younger players with their technique and overall development.

This is a tight-knit team, one capable of making a deep playoff run. And for the most part, it starts with the veteran leaders at the top.