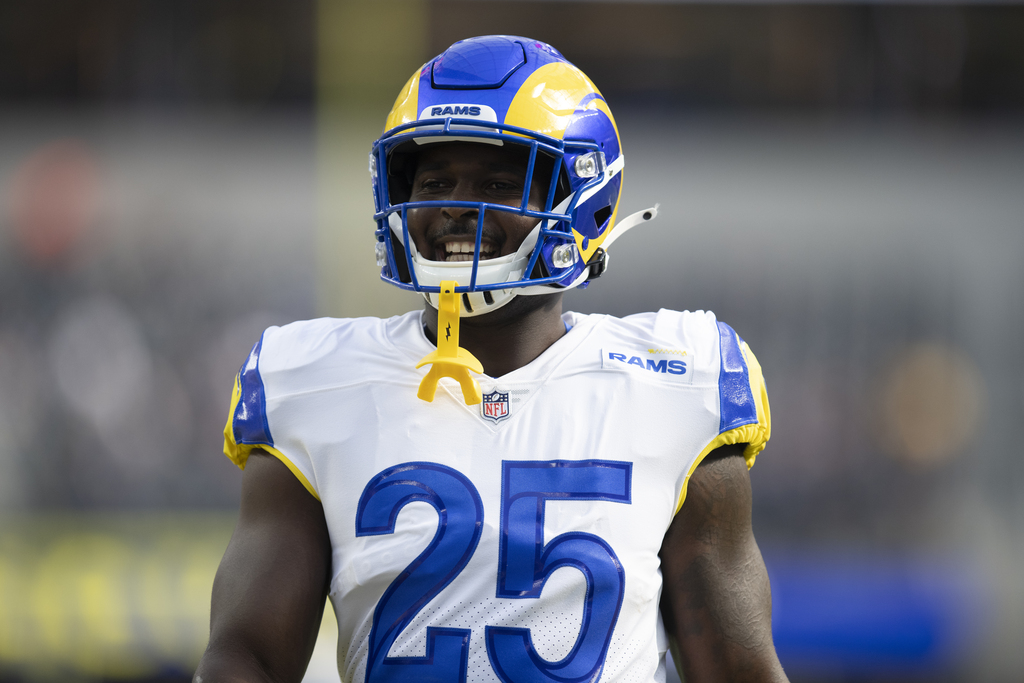 Darrell Henderson Jr.’s fantasy stock has been all over the place this year due to a season-ending injury suffered by Cam Akers and then the Rams’ eventual acquisition of Sony Michel just before Week 1. He went from looking like the clear workhorse back when Akers went down, but his chances of being that decreased when Michel arrived.

It’s only been one game, but Henderson received a healthy dosage of touches against the Bears in Week 1, carrying it 16 times for 70 yards and catching one pass for 17 yards. He played 94% of the offensive snaps, while Michel played only 6% (three plays).

Michel didn’t even get in the game until late in the fourth quarter when he got his first carry, a 2-yard run. Sean McVay explained why Michel’s role was so limited, predictably pointing to the “flow of the game,” but also suggesting that Henderson’s efficiency gave the Rams confidence in giving him most of the snaps.

“I would say, I have confidence in Sony but the way that Darrell was running, kind of the flow of the game like we talked about. Darrell has definitely established himself as our starting back. I thought he did a great job,” McVay said. “I thought he got stronger as the game went, but Sony’s a guy that’s had production in this league. It was just a weird deal the way that the game kind of unfolded. That’s why I always say that to you guys and yesterday was reflective of exactly that.”

McVay said the Rams planned to get Michel involved in the game earlier than they did, but considering they only ran 50 plays to the Bears’ 69, there weren’t many snaps to go around at running back. Not to mention, Matthew Stafford had two long touchdown passes for quick strikes at the beginning of each half, leading to shorter drives. Only three of the Rams’ seven possessions that weren’t kneeldowns were longer than six plays.

There simply weren’t many opportunities to take Henderson out and plug in Michel, and there was little reason to with Henderson averaging a healthy 4.4 yards per carry.

“We had planned to get Sony in the game a little bit earlier, but just based on the minimal amount of snaps that we had – a lot of it for good reasons because we were scoring quickly – but then we ended up having the three-and-out at the end of the first half,” McVay continued. “You’d like to be able to sustain more drives and then maybe you’ll see him get some more opportunities. But again, that’s always kind of based on how the flow of the game goes. But I thought Darrell did a really good job and I was pleased with the way that he closed it out. And I thought our offensive line really did a nice job of finishing it out. To be able to sustain the drive, have some of the third-down conversions that we did was really encouraging. But you can expect to see a little bit more of Sony, but if a game unfolds like that, I think we’d take a similar approach.”

It wasn’t initially clear how the workload would be broken up between Henderson and Michel, but there’s little doubt about who is the No. 1 running back in Los Angeles. It’s Henderson, and that likely won’t change unless he begins to struggle.