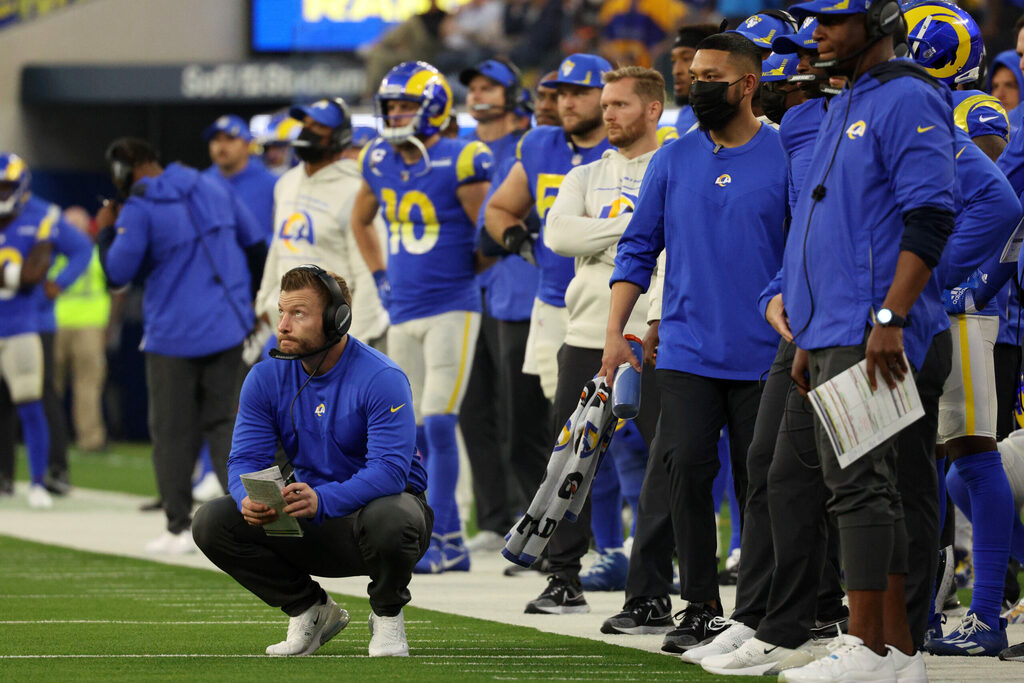 Sean McVay has put a ton of trust in Matthew Stafford this season. As a team, the Los Angeles Rams did, too, by acquiring him in a blockbuster trade with the Detroit Lions.

But with a chance to put Sunday’s game away, McVay took the ball out of his quarterback’s hands. After the 49ers punted back to the Rams with 1:57 left on the clock and Los Angeles leading 24-17, the Rams only needed to pick up a first down to clinch the victory.

McVay called a run play on first down that gained 2 yards. Then he went back to the ground with Sony Michel, picking up another yard. That put the Rams in third-and-7 with 1:40 left and the 49ers having just one timeout in their pocket.

A first down would’ve ended the game, but McVay elected to run the ball again – despite the fact that the 49ers had shut down Michel all afternoon. It resulted in a 2-yard gain and a punt by the Rams, giving the 49ers one last chance to win.

After San Francisco’s punt with about two minutes to play, the Rams had a 99.6% chance to win. Yet, they blew the 24-17 lead and lost in overtime.

On Monday, McVay was asked about his conservative play calls in that situation. He didn’t express any regret for the calls, but he did admit that Stafford’s toe injury was a factor, as was the belief that Michel could pick up the first down.

“A lot of things went into that. The previous sequence did definitely dictate and determine a little bit more of a conservative approach, but also Stafford’s toe injury did as well,” McVay said. “There were some different things that maybe you would activate as far as moving the spot, changing the launch point that he had hurt his toe at that point in the game and was a little bit hobbled. Now, he ended up finishing and doing a good job, but whatever I say, yes, the thought process. I still felt like there was a chance we could convert running the football. We’ve been in some of those four-minute type of situations, had a couple different runs with some heavier personnel groupings – one of which on the second down, I thought we had a chance to maybe come out cleaner. They did a good job defending it, but it was the totality of it all.”

McVay did say that maybe in hindsight he would’ve been a little more aggressive, but the goal was to move the ball on the ground and force the 49ers to burn their three timeouts.

“If you said in hindsight, maybe be a little bit more aggressive,” he said. “It didn’t work out for us. I’m always going to try to learn, but I don’t want to be – I think the thought process and the moment was sound, but it didn’t work out for us. But you do want to close games out. I had every intention of trying to convert a first down running the football and also having them utilize their timeouts. It wasn’t like we were just taking a knee. You felt like those runs would have a chance. They had stopped us pretty good on the run. There was a couple things that maybe I would’ve done where you’re still underneath the center that give you some run-pass option, but if it’s not there, then you’ve got the opportunity to still keep the clock running or force them to use that third time out. So, all those layers were in effect right there. And that was kind of the thought process in the moment there. It didn’t work out for us, and I want to be better, and I want to learn from those as well.”

Stafford has made some mistakes and turned the ball over carelessly, but in a situation like that one, McVay should’ve trusted his quarterback to make a play. Stafford has enough experience to know that if there wasn’t a play to be made, the best decision would be to go down and force the 49ers to burn a timeout.

It wouldn’t have been overly risky to have Cooper Kupp run a quick out or get Odell Beckham Jr. coming across the middle on a slant. Any high-percentage throw would’ve had a better chance to move the sticks than three straight runs after Michel was averaging about 2 yards per carry Sunday.

On the contrary, McVay frustrated a lot of fans when he called a pass play out of an empty set on third-and-1 before halftime, resulting in a sack. There was no threat of a run, which allowed Nick Bosa to rush off the edge without the possibility of a handoff.

McVay doesn’t regret that call either, saying he would make the same decision in that spot if given the chance to do it over.

“Yep. I felt we were kind of playing it conservative where I’d run it the previous two snaps kind of moving the clock down,” he said. “We got a look that we wanted on third down and one, and ultimately, we ended up getting sacked right there. But I felt good about what we had a chance to get done right there. They ended up executing better than we did right there.”

There were obviously some questionable calls made by McVay, which you could argue were the difference in the game. But his players didn’t execute, which was a bigger factor in the loss than his calls were.