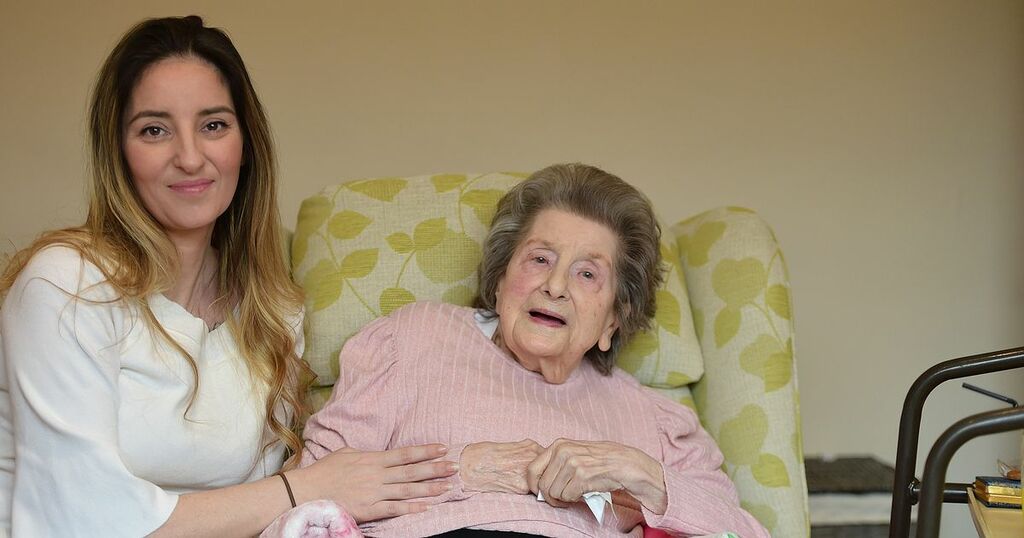 Scotland’s vaccination policy has been branded “insulting and inconsistent” for requiring football fans but not care home workers to be double jabbed.

New laws coming in to force in England on November 11 will make it illegal to work in a home south of the Border without proof of Covid-19 inoculation.

But despite introducing the controversial vaccination passports for football stadiums and nightclubs, Holyrood is not doing it for care homes.

Sonia Dixon, whose 101-year-old great-gran Doreen Tilly died months after being removed from a home in Glenrothes, Fife, said: “This is just another example of the completely disjointed approach to vaccinations.

“It feels like yet again the lives of people in care homes are treated as being worth less than everyone else.

“How can it be right that you will need to prove you have been double jabbed to go to a nightclub or football game but anyone can walk into a care home unvaccinated?

“The Scottish Government themselves have said staff were the most likely people to transmit Covid and we know the devastation it causes in a care home setting once it gets in.

“It is insulting and inconsistent and people deserve better.”

A Public Health Scotland report last year concluded that home staff are more likely to have unwittingly caused the huge wave of deaths of elderly residents.

It came in the wake of public fury that patients infected with Covid-19 had been discharged from hospitals into care homes.

Robert Kilgour, chairman of Renaissance Care which has 16 homes in Scotland and employs 1200 staff, said: “For some weird reason the government in the UK have decided to bring in a law from November 11 that all care home staff in England must be double jabbed, but it’s not happening in Scotland.

“The Scottish Government initially said no, then that it was under review, then not at this time.

“At Renaissance Care we have about 90 per cent of staff vaccinated and all new staff must agree to be double jabbed but we can’t change the terms of existing staff unless the Scottish Government do what the UK Government has done and make it law.

“If the Scottish Government want to do it then I don’t have a problem with that because I think it is the right thing to do to be vaccinated.

“I am not sitting back on vaccinations anyway and I would rather do it with persuasion and education. I do think it is inconsistent that NHS workers in hospitals don’t need to be vaccinated but in England care home workers do. We need to see a consistent approach.”

The vaccination row comes amidst a growing staffing crisis in care homes caused by Brexit and workers leaving for other better paid jobs. Last week the Sunday Mail revealed a shortfall of 17,000 staff is expected by the end of the year across the care ­industry in Scotland.

And we have learned a new report to be published by Scottish Care will show a quarter of staff leave within the
first three months of joining an organisation.

The stark finding has emerged in a workforce recruitment and retention survey carried out between July and August to better understand the challenges facing the sector. A total of 251 providers and organisations from the private, third and voluntary sectors responded.

Almost 90 per cent stated recruitment and retention was problematic for them, with providers advertising for openings on a rolling basis.

More than a third recruit weekly, while an additional third stated they were looking for staff daily.

A Scottish Government spokesman said there was no plans for mandatory vaccinations for care home workers, but admitted the policy was constantly under review. He said: “Vaccination remains critical in the fight against Covid-19 and health and social care workers have been among those prioritised for the vaccine, with the overwhelming majority taking it up.

“The response from care home staff in Scotland to the call to take up their vaccinations has been fantastic.

“Uptake has been exceptionally high, and the total number of staff who have had both doses of the vaccine actually exceeds the originally projected cohort.

“We’ve worked with the care home sector and staff to engage with them and discuss any concerns they had. The result of listening and engaging positively with the workforce has been the exceptionally high levels of care home staff vaccination in Scotland.

“We currently have no plans to make vaccinations mandatory for health and social care staff as it’s clear that these caring staff in Scotland are overwhelmingly making the choice to be vaccinated to protect themselves and their residents. We will continue to keep this position under review.”

Labour’s health spokeswoman Jackie Baillie opposes mandatory vaccinations in any setting. She said: “The health and wellbeing of the Scotland’s care home population and those that care for them must be of paramount importance.

“Vaccination must always be a choice, but the Scottish Government must do all within its power to encourage uptake of the vaccine among our care workforce, including bringing vaccines to frontline workers.

“We also need to recognise that you can still get and pass on Covid whilst being fully vaccinated, so ramping up testing is essential.”

Cathie Russell, of the Care Home Relatives Scotland group, added: “It has always been our view that we shouldn’t depend on vaccines for contact to go ahead. Safe contact can always be enabled if you pay good attention to infection control.

“With international travel opened up and the COP26 summit happening soon, new variants could emerge that have escaped the vaccine anyway. The key safety measure should be infection control.

“There has been a massive willingness among staff and care home residents to be vaccinated so there is no need to
mandate this – it just causes tension and bad feeling unnecessarily.

“Great care workers are really precious – they should not be driven out unnecessarily.

“As long as they are doing the testing and have good infection prevention control routines there is no call from us to make vaccines compulsory, though I think most people looking at the hospital stats and reading the evidence would choose to be vaccinated.”