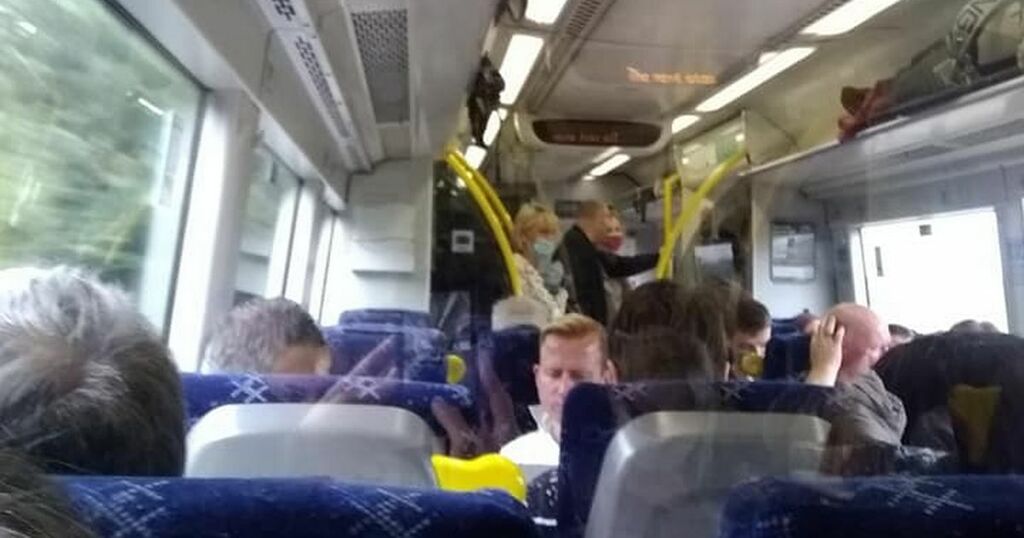 A vigilant traveller has raised concerns about the ‘packed’ Scotrail trains and the ‘risk they pose to public health’.

The concerned train user captured the ‘evidence’ on his phone and posted it online demanding the train company make ‘contingency plans’ for busy services.

Posting on the All About Edinburgh Facebook page, the commuter said: “Took the train a few times in Scotland. Have to say very disappointed in the failed management.

“5 out of 6 trains I took were delayed or cancelled.

“No contingencies planned so this is what happens in this Inverness to Edinburgh train: jammed packed people like sardines, people standing in isles, some with no mask and many coughing. No air flow.

“Has no one at Scotrail realised the poor planning no longer creates just inconvenience, but a gross negligence and risk for public health?”

In the image, commuters can be seen standing close together with their masks at their chin checking their phones, and those seated had taken their masks off completely, according to a EdinburghLive report.

Earlier this year, a similar incident was reported where a Scotrail passenger had branded the services as dangerous, as people crammed into another carriage on route to Edinburgh.

Travellers reported feeling ‘unsafe’ on services between Scotland’s two largest cities during July’s sunny weather after it emerged express trains had been reduced to just three carriages each.

Left furious at the lack of safe distancing, the passenger had described the journey as “disgusting”, and also commented that only around half of those on board were wearing a mask.

Responding to the complaints, ScotRail stated that all of their available carriages were in to help alleviate the problem, and emphasised their five rules for travel, one of which includes “don’t board if you don’t feel safe”.

The travel operator has also encouraged passengers to avoid travel if they feel unwell and to avoid peak time services if and when possible.

On this occasion, Scotrail has declined to comment on the situation.

Advice from Transport Scotland warns trains may be operating at a “reduced capacity” due to physical distancing measures being in place, however there is no hardline rule for maximum capacity on services.