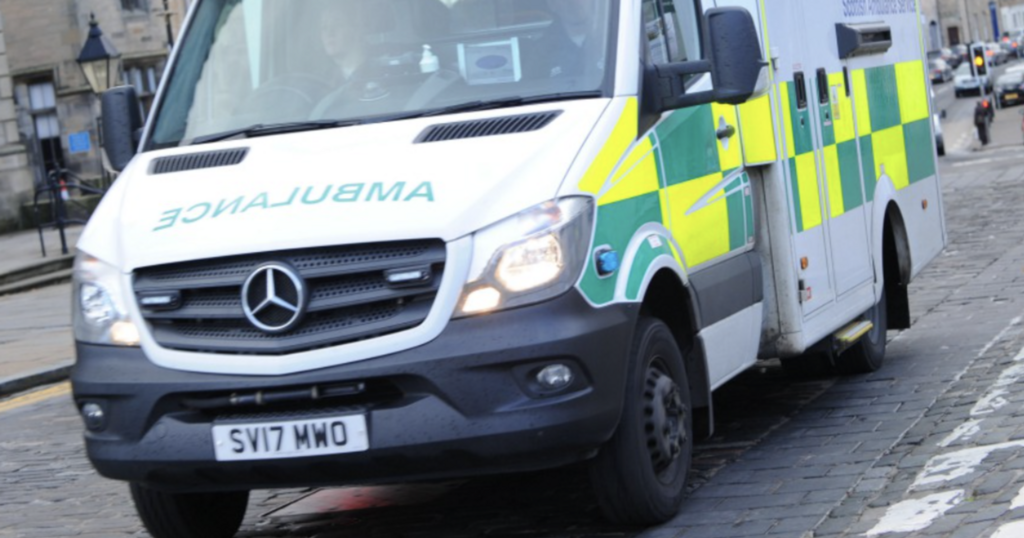 A pensioner has told how his wife was forced to wait 20 hours for an ambulance as she lay in agony from a dangerous reaction to a hip operation.

When Sheila Anderson, 67, of Thornwood, Glasgow was finally taken to hospital she spent a further three hours in the back of the ambulance waiting to get in the door.

The 23-hour delay in getting to hospital came despite medics advising Sheila over the phone to call 999 for an ambulance as she needed urgent treatment.

Sheila’s husband George, 69, told of the family’s anger at the way mum-of-two Sheila was treated.

His revelations come as paramedics warned yesterday that lives could be lost because of ambulance delays.

The Daily Record revealed how the Unite Union has called for “major incident” status to protect the public due to soaring ambulance waiting times.

Whistleblowing paramedics told how the average 999 ambulance waiting time has increased to six hours with worried staff saying it is down to “system overload”.

Some paramedics believe lives have already been lost because of delays and fear more patients will die.

The time from all 999 calls being received until the patient is delivered to hospital was on average between 55 minutes and 70 minutes. But now it is taking six times as long with patients waiting several hours at the door of the hospital to be handed over to medical staff.

The union said waiting times outside hospitals on Tuesday peaked at seven hours, with some patients waiting 24 hours for a bed during the crisis.

In real terms, this means an ambulance misses three 999 calls while located at a hospital waiting for patient discharges.

George told of the reality of the impact on patients such as his wife Sheila.

He said: “Sheila was discharged from the Golden Jubilee Hospital on Saturday after a hip operation on Thursday.

“On Monday morning she phoned the Golden Jubilee because she was having severe headaches, nausea and vomiting. They phoned her back about 1pm and a nurse said it sounded like a reaction to a nerve blocking injection she had for the hip replacement surgery.

“She told her to make an urgent 999 call to the ambulance service as this was an A & E matter.

“Sheila called the ambulance at 1.20pm - directly after that call, Ambulance control said they would get an ambulance along but it might take some time because they were experiencing a large volume of calls.”

Over the next few hours George and the couple’s daughter Yvonne Payne, 43, made a couple of calls to check on the progress and at 1am - 12 hours after the original call - they received a call from a male operator reassuring them she was still on the system and was moving up the list and that they would get to her shortly.

Another five hours passed and George called again but this time he was met with a very abrupt response from a female operator who snapped: “If nothing has changed in the patient’s condition don’t phone again. This is an emergency service.”

However, three hours later Yvonne called again and spoke to someone more receptive to their pleas for help and promised to despatch an ambulance within six minutes. It turned up at 9.20am - exactly 20 hours after it was first called.

But when George got in to hospital to see her later that night Sheila told him her wait had not ended when the paramedics picked her up.

The retired construction estimater said: “Apparently she remained in the ambulance at the entrance to the QEUH for more than three hours.

“A paramedic told her this was not an isolated case and sometimes they only managed to pick up two patients in a shift because of the delays at hospitals.”

George added: “I am certainly not having a pop at hospital staff. My wife and I are their great defenders. I had pneumonia two years ago and the care I got was stunning.

“But what I am extremely convinced of is that the triage system isn’t working.

“The people answering the phones appear to have a tick-list of questions. But they are not medical staff so a lot of what people say could be interpreted in anyway whatsoever.

“Their triage system needs to be vetted because it is dangerous.”

Last night Labour’s health spokeswoman Jackie Baillie said: “This is yet another horrific report that lays bare the chaos our ambulance services are in, despite the best efforts of the staff.

“For this person to be denied help for hours is simply unacceptable and for this to continue for almost a day is shocking.

“Our ambulance services are in crisis and the people of Scotland are now being put in danger due to the inaction of this SNP government.

“Humza Yousaf cannot keep turning a blind eye to the human tragedy unfolding on his watch - he must act and act now to provide ambulance services with the support that they need.”

And he said it was “unacceptable that anyone should have to wait almost a full day between the ambulance being called and getting into hospital.”

He added: “I know from my own casework these are not isolated incidents and since I raised this at FMQs more people have been coming to me with further really concerning examples of the massive waiting times for ambulances to get to them and then the further delay of being able to be admitted into hospital.”

A spokeswoman for the Scottish Ambulance Service said: “The NHS as a whole is experiencing significant sustained pressure across Scotland, as exacerbated by the Covid-19 pandemic, and this is regrettably causing lengthy hospital patient handovers.

“Our staff are working incredibly hard during this challenging time to ensure the sickest patients are prioritised first. While we can’t provide further details due to patient confidentially, we’d like to apologise to Mrs Anderson and her husband for the delay.

“In response to these pressures, we have escalated in line with our plans to maximise resource provision, placed all clinically trained staff on frontline duties, sought support from partners whilst working with health boards across Scotland to minimise delays.”

A spokesman from NHS Greater Glasgow and Clyde blamed the " significant demand on health services " including Emergency Departments and receiving units which are seeing an "increased number of patients with a broad range of conditions".

He said: “This means our clinical staff are extremely busy caring for those additional patients as well as increasing numbers presenting with COVID – whilst at the same time maintaining enhanced infection control precautions for all."

He said the pressures had led to some delays in receiving patients arriving by ambulance and added: " We are sorry that Mrs Anderson experienced a delay in being transferred from her ambulance into hospital."

A Scottish Government spokesman said: “We are sorry that Mrs and Mr Anderson had to go through this and for the added anxiety that this will have caused them at an already stressful time.

"It is vitally important there are no unnecessary delays for ambulances taking patients to hospital and we continue to work closely with the Service and with Health Boards across Scotland to ensure ambulances are cleared as quickly as possible.

“The ambulance service is carrying out a national review of demand and capacity to ensure it has the resources in place to meet current and projected future demand. This review resulted in an additional £20m is being invested in the service.”