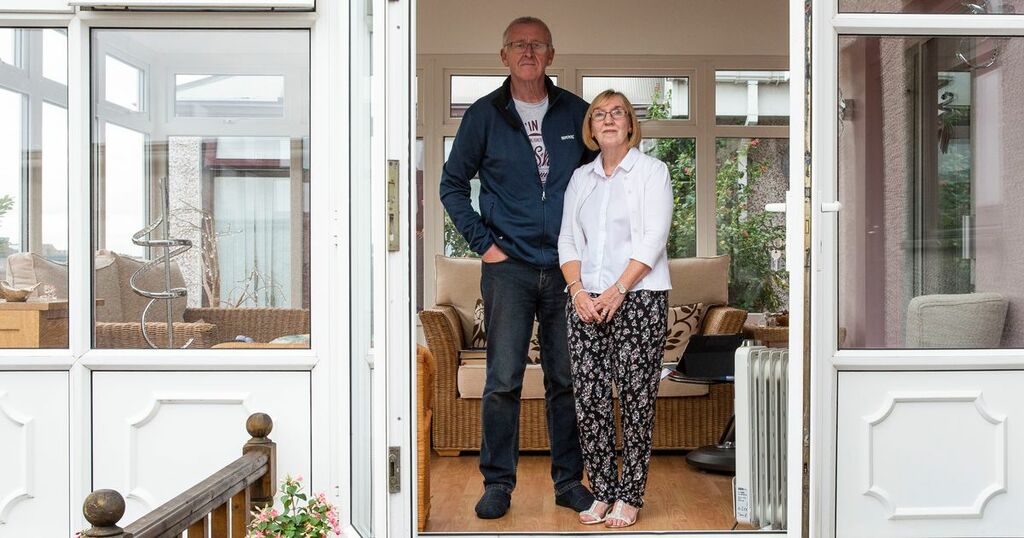 An elderly Scots couple claim they were ‘abandoned’ in an isolation cabin for 25 hours after catching coronavirus on a cruise ship where several other passengers have fallen ill.

Marilyn and David Thomson, from Saltcoats, boarded the MSC Virtuosa on September 1 for a relaxing week-long break around the British Isles.

The holidaymakers say their first three days passed without any concerns despite noticing a distinct lack of face mask enforcement on the luxury ship.

But rumours soon began circulating that positive cases had been identified with a number of passengers allegedly self-isolating.

Marilyn, 60, told how there was an overnight change on the boat with perspex screens thrown up and regular tannoy announcements reminding passengers to stay safe.

To her horror, the pensioner and her 64-year-old husband tested positive on a lateral flow test on September 7 - the day before they were due to get off in Greenock.

Marilyn claims they ‘frogmarched’ to an isolation cabin and left without drinking water where they spent the next 25 hours desperately trying to get answers from staff.

She explained: “We had no idea that there was covid on the ship but now I firmly believe there were positive cases on board before we embarked.

“If we had known, there is absolutely no way we wouldn’t have gone on because my husband has recently had major surgery.

“We started hearing rumours about there being coronavirus on board after my brother-in-law came out of the smoking area on the Friday.

“There seemed to be a bit of whispering going about people having tested positive on their lateral flow tests and that there were a number of people isolating on deck 10.

“For the first three days after we boarded, you were able to go wherever you liked, they weren’t enforcing mask wearing and could help yourself at the buffet.

“You did have to sanitise your hands before but then you were to share all the utensils and serve yourself - just like normal cruising.

“But by the following morning, it was definitely apparent that there was an issue on the ship.

“They had screens everywhere up at the buffet and no one was allowed to help themselves. You had to stand in line and you were served. They were then coming on the tannoy frequently, talking about health and safety and mask wearing.

“They then said they were offering a free lateral flow test for any passengers disembarking in Southampton that day but that it wasn’t compulsory.

“They then did the same at Liverpool on the Monday. We then got a letter in our room that seemed to make it sound like it was mandatory for those getting off at Greenock to get one.

“They gave us specific times which hadn’t been done for the previous stops.

“I would’ve done one when we came off anyway. But you have to wonder how many people haven’t? This is going to spread like wildfire because people were choosing not to do it.”

The couple, who paid £1798 for their holiday, did not display any of the regular symptoms associated with the virus and were gobsmacked when their tests came back positive.

They were left fearing that they would not be allowed to leave the ship the following day - September 8 - when they were due to return home.

Their ordeal continued for the next 25 hours as Marilyn claims staff ignored their calls for help after discovering no soap or drinking water in the room.

She explained: “We took our tests at around 10.30am on September 7 and about 45 minutes later there was then a message over the tannoy asking us to contact guest services.

“They told us our tests were inconclusive and they wanted to send someone from the medical centre to do another one.

“So of course I said yes and therein started the nightmare. Three tests that day came back positive.

“At teatime, they told us we had to move to a different cabin to isolate because that’s what their protocol states.

“There were these two heavy security guards who were pointing their fingers at us. It was like the Gestapo. They didn’t speak a word to us - just frogmarched us through the corridor.

“I was asking what was going to happen the following day and whether we would be allowed to get off the ship in Greenock. But they kept saying someone would tell us later.

“We got into the room and there was no hand soap in the basin. There wasn’t a kettle and only one glass with no drinking water.

“We called guest services who said they would get someone to call us back in five minutes. “This never happened. We kept calling room service and guest relations but nobody was answering.

“I eventually hit the medical emergency button and that’s when it all kicked off. I told them it was the prisoner from cell block H calling and they couldn’t keep ignoring us.

“Thankfully David had put a bottle of water in our bags while we were rushing around trying to get our things sorted before going into isolation.

“Of all the holidays I’ve been on and the things I’ve experienced in life, that has been the most traumatic experience.

“We were trapped in that room for 25 hours and we had no idea if they were going to let us off that ship.

“When we got into Greenock, we watched everybody else getting off until it was just us left. At that point, I called guest services and told them that they had to come get us or we were going to walk off the ship through the normal route.

“MSC said that their customers' health was their priority but after what we experienced, it’s clear that greed and money are at the forefront of their decisions.”

Marilyn also told how none of their close contacts on the holiday were notified by MSC despite wearing special wristbands that were supposed to help with track and trace efforts.

The couple booked PCR tests at Prestwick Airport and had their positive results confirmed a short while later.

They continue to isolate at home but claim that the cruise ship operators haven’t notified any of their close contacts - including relatives on the ship - despite wearing special tracking wristbands.

The pensioner also reported difficulties in notifying NHS Scotland’s Test and Protect about close contacts due to the ship not having a postcode.

Several MSC Virtuosa guests have reportedly tested positive for the virus over the last week - including at least one death on board.

A Scottish Government spokesperson said: “Digital contact tracing forms enable people who have tested positive to input the details of known contacts, as well as to link cases through the input of a postcode and name of settings visited while infectious.

“Inputting the details of contacts can be carried out separately to inputting a postcode or adding information on location.

A spokesperson from MSC Cruises said they were "devastated" to learn of Mr Broyden's death and said all members of his party had tested negative, in line with their protocols, upon boarding the ship.

They added: "We are sorry to hear about the disappointing cruise experience for Mr and Mrs Thomson and we are in touch with them to understand their concerns better.

"We are always saddened to hear if there were potential issues or we did not meet expectations in some way for our guests.

to embarkation and protected ashore visits at each destination.

"Any guest who tests positive, displays symptoms or a temperature are denied boarding.

“Any guests who test positive onboard are immediately isolated with all close contacts traced.

“Following review of our files for Mr and Mrs Thomson, we can confirm this was all done according to our protocol and in collaboration with the relevant local health and other authorities.”