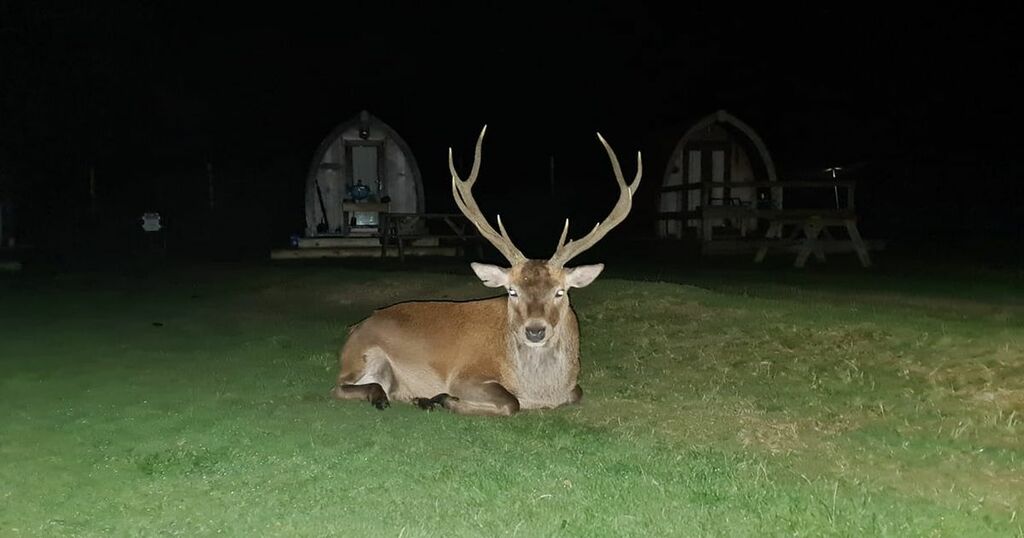 A Scots camper got the fright of his life when he spotted a majestic stag sitting right outside his tent as he got up to go to the loo.

Aaron Kirkpatrick, from Brighouse Bay in Dumfries and Galloway, was staying at Lochranza campsite, Arran, when he spotted the incredible creature late one night.

The maintenance worker was walking in the dark, using the torch from his phone, when he came across the 12-pointer chilling out on the grass.

Aaron said: "I was walking from the tent to go to the toilet with only my phone on me.

"I didn't have the light on and the stag must have seen me coming.

"He made a quiet bellow at me as I approached and I nearly jumped out my skin."

Aaron said that the stag didn't seem to be all that bothered by the close encounter, and was even happy to interact.

He added: "I must not have scared him as he couldn't even be bothered to get up. I kneeled down in front of him and got a couple of pictures.

"I actually managed to stroke him a couple of times before then going to the toilet block. Once I returned he was gone."

The 32-year-old shared a photo of the stag online, showing the majestic beast just lying down in the middle of the campsite.

He joked that if the stag didn't make noises he would probably have stood on it.

Aaron said: "The reaction online has been extremely good. Everybody has been saying how lucky I am for the stag to feel comfortable enough to let me so close to him."

Another added: "Majestic animal, watching over you while you slept!"