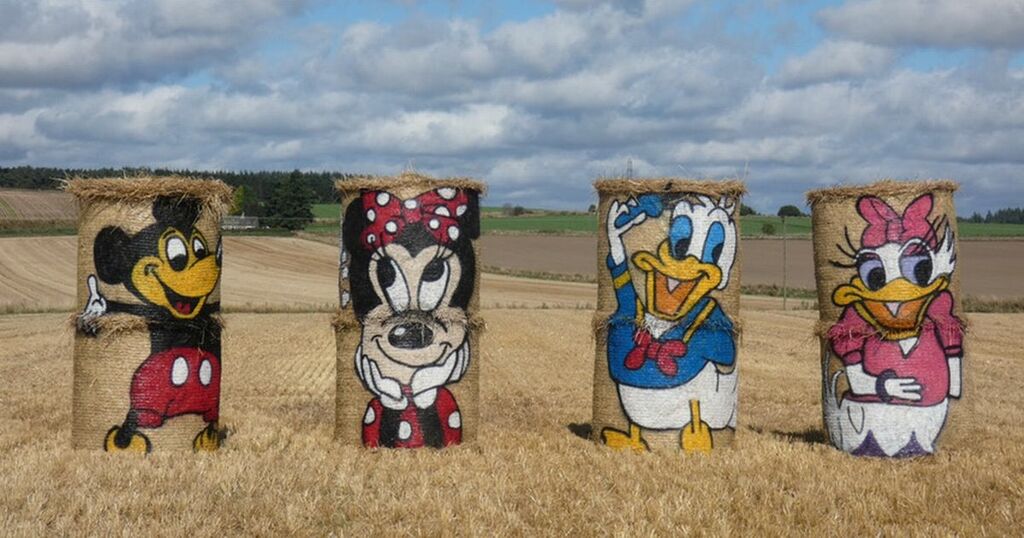 An Angus-based artist, who has been dubbed 'Balesy' by her friends, is back with another magical piece of artwork using straw bales in a bid to raise a smile or two, as well as much-needed funds for charity.

Designed to brighten up people's day, the unique bale paintings by artist Fleur Baxter also have a serious message as it's hoped they'll raise awareness and money for a very important charity.

Fleur has been creating the bale art on her farm in Angus since 2014, and this year, she's added a distinctly Disney theme with stars like Mickey, Pluto and Minnie all gracing the straw bales.

The whimsical displays have previously included Winnie the Pooh and Pokemon themes and will greet drivers heading along the B9128 at East Skeichen Farm, which can be found between Carnoustie and Forfar.

Speaking about her brilliant creations, the very talented artist said: "Essentially it’s that time of year again when there’s an expectation that “Balesy” will bring out the spray paints once more.

"This year I wasn’t entirely sure I was going to do a display but after a bit of pressure I put pen to paper and came up with a Disney theme."

Fleur says her choice was down to the special characters and the feelings they convey. She added: “Mickey Mouse represents everything that Walt Disney wanted to portray - happiness, fun, dreams, and the ability to bring families together.

"The Mickey symbol has the power to evoke positive emotions and make memorable experiences, thus forming a strong and consistent meaning round the world.

"As we emerge from the last hideous two years I thought this would be most appropriate."

Fleur says she is delighted for people to come and have a look but also hopes people will donate to her JustGiving page (you can donate here ) where she is raising funds for the charity Parkinson’s UK.

She said: "I do have a JustGiving page for anyone wishing to donate to Parkinson’s UK, a charity close to my heart this year as I have a close friend whose father is desperately ill with it, and also too one of my late father's best chums."

To create the fantastic artworks, Fleur had to first draw the sketches out on the barley straw bales before painting them in their vibrant, eye-catching colours.

Delighted with the results, Fleur explained that it's the joyful smiles and laughter of those on their daily commute or the school run, which keeps her bringing out the spray paints every year.

"I'm still looking for a sponsor though," Fleur joked. "It’s getting more and more expensive to do!"