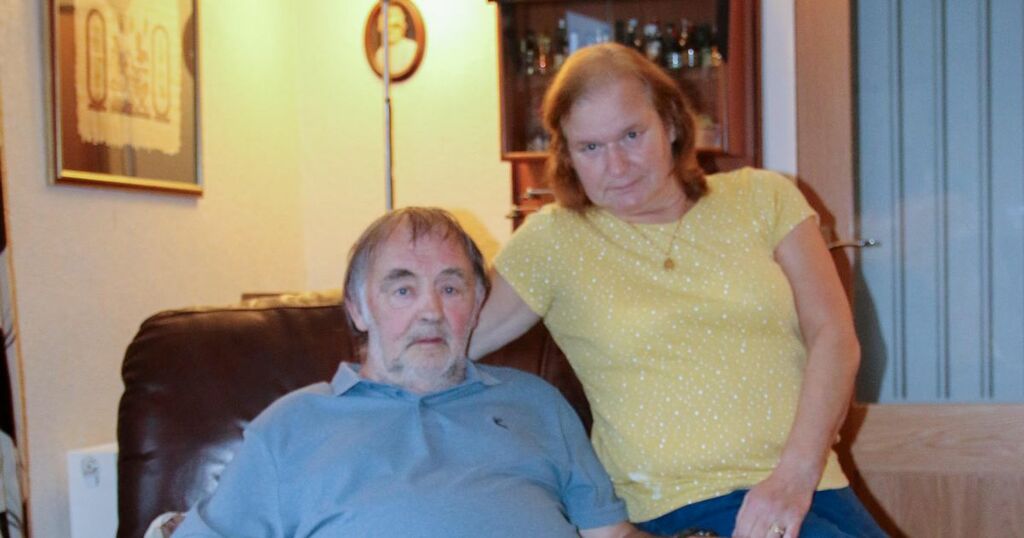 A family has been forced to plead with an NHS body to move faster after a series of cancelled operations for a painful hernia.

Jack Macpherson is living with an intolerably painful hernia the size of a melon – but over the last two years he has had his operation to remove it cancelled four times.

Wife Christine and daughter Anna Walker are calling on NHS Highland to speed up the wait for operations for those who have complicated cases who are living in severe pain.

Mr Macpherson, a 71-year-old former golf course greenkeeper from Durness, Sutherland, suffered a stroke in 2017 leaving him unable to communicate, but his family say his constant discomfort and pain is written all over his face.

In spite of guarantees from NHS Highland that the treatment would be completed by August 2021, he is still waiting to have the procedure.

The night before the operation, Mr and Mrs Macpherson travelled to Wick and stayed in a hotel overnight, ready for an 8am admission the following morning, but they were disappointed when the operation was cancelled at the last minute.

His next operation was scheduled for May, when again it was cancelled at the last minute, when the couple were told they would need to travel to Raigmore Hospital in Inverness for the procedure.

Mrs Macpherson, 66, said: "The operation was then scheduled for June 3 but Raigmore phoned to cancel it because of lack of staff in hospital.

"We were assured it would be done before the end of summer, and we had an appointment for August, but it was cancelled."

She continued: "The hernia is double the size from the first time he went to hospital.

"Jack is a stroke survivor so communication is very poor, but it is obvious how uncomfortable he is. He is in discomfort just sitting.

Mrs Macpherson has considered paying privately for the operation but her GP advised her not to.

Daughter Anna Walker, 41, said: "Myself and my family are literally begging for some help.

"Given the recent climate, hospitals are struggling, I know. However, my father's story is now in my honest opinion a story of modern day cruelty and neglect.

"His hernia is now the size of a melon, he is in such pain and discomfort he can hardly walk and again he cannot communicate the extreme levels of pain he is in.

"It clearly states on the NHS website a hernia that cannot be pushed back in is a medical emergency, and should be treated immediately – my poor father has been like this for over two years.

"I’m at the end of my tether and we need someone to help so we can try and end his suffering."

MP Jamie Stone, who represents Caithness, Sutherland and Easter Ross, said: "To have an important operation cancelled four times has no doubt been very upsetting for Mr Macpherson and his family, and I understand he has been left in severe pain. I have made representation to NHS Highland on his behalf.

"At the heart of the matter is the Scottish Government's inadequate management of our health service. Frontline NHS staff are working incredibly hard, but I am deeply worried that they are not receiving sufficient support to deal with both Covid and distressing cases such as Mr Macpherson's."

An NHS Highland spokesman said: "NHS Highland’s clinical emergency pathways have been under significant pressure across primary and secondary care. As a result of these pressures we are struggling to keep pace with all the services we are currently aiming to deliver to as a part of the remobilisation of planned elective care.

"As a result, some elective work has had to be postponed. We wish to apologise to all patients who we have had to reschedule for their operations.

"The pressure on services has not gone away and is still being felt right across our health and social care system. Emergency admission levels at the hospital remain high and everything is being done to facilitate our elective programme continuing.

"However, looking at the rising prevalence of Covid-19 there are significant risks to the elective programme over the next few weeks."

He added: "We are actively looking at ways we can continue to deliver elective and emergency care and minimise the risk of any further cancellations. We would encourage the gentleman to contact our feedback team to enable us to discuss his case in more detail."