After Nipah outbreak, a call to study ecological impacts of exotic plants 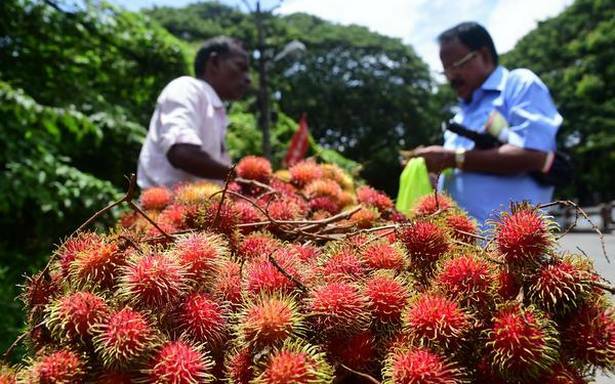 As Kerala hopes to have seen the end of a third spell of Nipah outbreak in three years, scientists have recommended studies into the ecological impacts of exotic plants in wake of emerging zoonoses.

While plant import is being regulated in the country with measures including plant quarantine, the need for assessing the interaction of imported plants with indigenous species assumes importance at a time when the former found a good market due to monetary benefits.

Ecological physicist R. Jaishanker, chairperson of the School of Informatics, Digital University of Kerala (DUK), said much effort was invested in containing zoonotic diseases, but not enough on analysing the root cause.

While studies following the 2018 Nipah outbreak had concluded that the virus was first transmitted from fruit bats (Pteropus spp), the route of the spillover remained unknown. During the recent outbreak, experts have raised suspicion over the infection’s link to Rambutan, an exotic fruit which along with Mangosteen, Pulasan, Durian, Dragon fruit etc. is gaining prominence in Kerala.

Explained | Why is Nipah’s return in Kerala a cause for concern?

Currently, the import of exotic plants was regulated under Plant Quarantine (Regulation of Import into India) Order, 2003, that mandated phytosanitisation and quarantine measures to ascertain whether imported plant materials carried any pest, fungi or other microorganism.

“However, there is no mechanism to track the long-term ecological impacts of large-scale cultivation of exotic plants. Aspects such as their interaction with native species, influence on biotic assemblage of the introduced ecosystem that involves plant-pollinator interactions, and alterations in the food web remain overlooked. Imported plants bypassed the naturalisation process that normally happens over many years,” Prof. Jaishanker said.

Sooraj N.P., a researcher at the C.V. Raman Laboratory of Ecological Informatics, DUK, advocated studies to check whether the abundance of exotic fruiting plants attracted fruit bats or caused the increased presence of the bat population in human inhabited areas.

He pointed out that a proposal for an integrated system for monitoring exotic species had figured in the lapsed Agriculture Biosecurity Bill that had been tabled in the Lok Sabha in 2013. The One Health concept was key in tackling zoonotic diseases, he added.