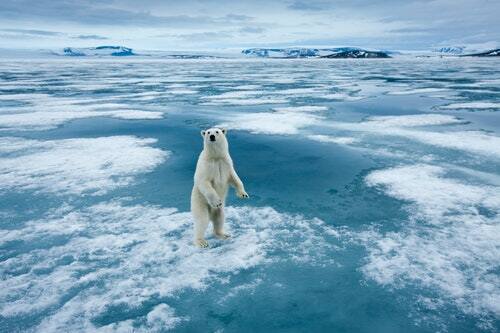 The year 2100 may seem distant and hazy, but scientists say it’s easier than ever to picture the bleak future in store if we don’t act to curb the climate crisis.

Human activity is accelerating extinctions. Climate change specifically endangers roughly one in five animals on the IUCN’s Red List of threatened species, increasing the likelihood they will go extinct.

And according to recent research, certain animals dependent on ice, like the polar bear, are even more vulnerable than previously realized.

The study links the animal’s demise by 2100 in Arctic regions to the complete melting of summer ice under a scenario of high greenhouse gas emissions, making it near impossible for ice-dependent polar bears to survive by the end of the century.

“If the year-round ice goes away, entire ice-dependent ecosystems will collapse, and something new will begin,” Robert Newton, a co-author on the research and a senior research scientist at Columbia University’s Lamont-Doherty Earth Observatory, said in a statement.

This finding was published in September in the journal Earth’s Future.

Why is Arctic ice important?

We’re all familiar with the images of vast icebergs floating in the Arctic sea, but this sea ice isn’t just beautiful — it’s essential for all life on Earth.

Arctic sea ice reflects sunlight away from Earth’s surface, keeping temperatures cool. But when it melts in the summer, Arctic oceans absorb the sunlight instead, causing oceans to warm and temperatures to rise.

The sea ice is at its thinnest in September, but the ice begins thickening again as we enter into the winter months.

In some parts of the Arctic, such as the “Last Ice Area” — a vast area north of Canada and Greenland — sea ice has historically thrived year-round instead of melting during the summer, providing a vital habitat for ice-dependent animals like seals and polar bears.

Why is Arctic summer ice melting?

A 2018 study suggests that if we emit an additional 800 gigatons of carbon dioxide into the atmosphere, it’s likely that summer sea ice will eventually disappear from the Arctic during the months of August and September.

Another 2018 report suggests that in order to significantly reduce the likelihood of the Arctic Ocean being ice-free — to less than five percent — we need to keep total future carbon dioxide emissions below 500 gigatons. Humans emitted 9.3 gigatons of carbon dioxide alone in 2020, though researchers suggest that was likely lower than normal due to a global pandemic restricting production and manufacturing.

Specifically, the researchers focus on a region of the Arctic known as the “Last Ice Area”, an area north of Canada and Greenland where summer sea ice is expected to last the longest in the face of global warming.

The scientists consider the impact of two global warming scenarios on the Arctic sea:

(According to a report released by the United Nations in August, we’re following the higher-warming path.)

Both scenarios aren’t great for Arctic ice melt, as ice levels dramatically thin by the 2050s. But in the lower-warming scenario, ice sheds stabilize in the latter part of the 21st century, with ice shed levels in the 2090s resembling levels in the 2050s.

Under the higher-warming scenario, summer ice melt will completely disappear by 2100.

This melting Arctic summer ice isn’t just a problem for humans, such as local Indigenous groups that rely on sea ice for hunting, but also animals like polar bears and seals, whose survival depends on the ice staying intact.

How do polar bears survive in the Arctic?

Summer Arctic ice is critical for supporting larger mammals, such as seals and polar bears, who need year-round ice coverage to maintain their lifestyle.

The researchers write: “Ringed seals and polar bears, for example, have relied on their dens in the ridged and corrugated sea-ice surface to stay approximately in one place.”

According to the National Wildlife Foundation, polar bears especially rely on permanent sea ice in order to hunt seals — their main source of food.

Due to human threats ranging from global warming to oil and gas drilling, this habitat and food sources are at risk. The IUCN Red List notes the polar bear is vulnerable — the last step before it becomes officially endangered.

It’s unclear exactly how many polar bears remain in the wild, though one 2018 study estimated there were a little more than 23,000 polar bears around the world.

While some animals are able to adapt to a changing climate, whether or not the polar bear can is less certain.

In a study published in April of this year, researchers found polar bears evolved to consume a soft diet of blubber and meat and are less able to consume harder foods. This makes it difficult to live elsewhere.

There is a chance that they could survive, for a time, by foraging. But their highly specialized bodies likely mean there’s not enough time for them to evolve: Like the Neanderthal, their genetic legacy may most likely be secured through mating with other types of bears.

How can the Arctic be saved?

We need to lower our greenhouse gas emissions immediately if we want to save Arctic summer ice and preserve the habitat of polar bears.

As the Earth’s Future researchers stress, there’s a big difference between the ice melting trajectories under a low-warming scenario versus a high-warming scenario exceeding 2 degrees Celsius. They suggest it may still be possible for sea ice to recover if “the global warming trend is reversed,” thereby saving ice-dependent creatures like the polar bear.

Their findings are in line with other recent studies, which suggest we can reduce the likelihood of Arctic sea ice disappearing by 70 percent if we prevent global temperatures from rising more than 1.5 degrees Celsius above pre-industrial levels.

We can also take steps to protect these areas from pollutants such as oil and gas drilling, which also pose a threat to sea ice. In 2019, the Canadian government established the Tuvaijuittuq Marine Protected Area, which protects one-third of the LIA from oil and gas development while still allowing local Indigenous groups to hunt for necessary resources in the area.

But the researchers argue that it’s not just on one government to protect this essential region — especially since Arctic ice helps moderate temperatures around the world.

“Clearly, governance structures to preserve, and hopefully, one day to restore, sea ice ecologies must extend to international... cooperation,” the researchers conclude.