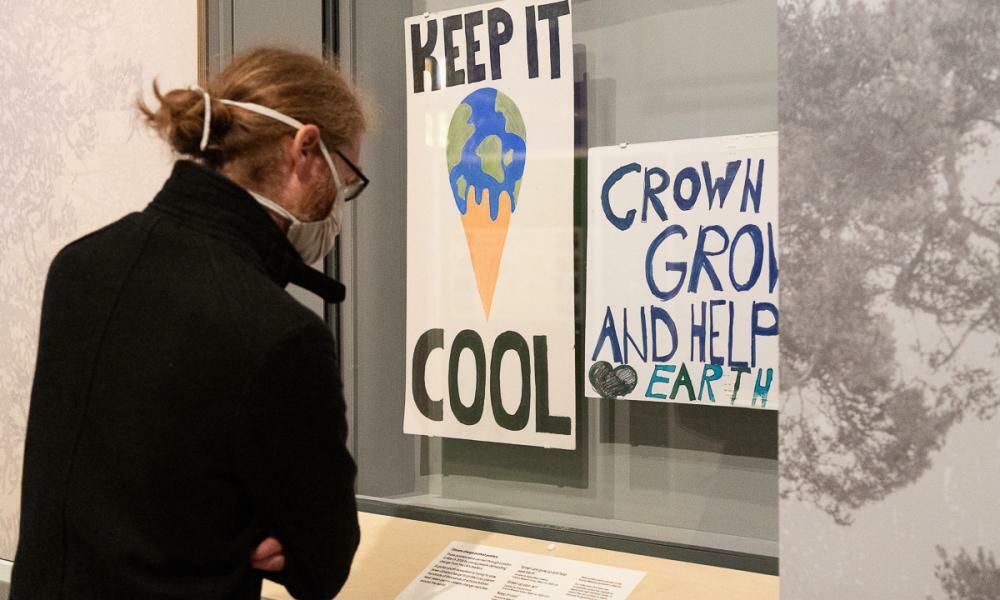 The Science Museum has said it will take down a placard created by a student for the school climate strikes after an appeal to remove it from an exhibition sponsored by Shell.

In an open letter sent to the museum, the UK Student Climate Network (UKSCN) called for the placards to never be used in any “fossil fuel-sponsored” space again, saying the inclusion in the Our Future Planet exhibition was an attempt to greenwash and legitimise the oil company.

The letter states that the protesters who created the work were highlighting “the exploitation and destruction caused by fossil fuel companies” and that the museum failed to inform the students their placards would be used in an exhibition sponsored by Shell.

“We question why the Science Museum felt it was appropriate to display placards from these protests in an exhibition sponsored by Shell, one of the corporations the climate strikes were fighting against,” it states.

Bella May, 20, a student at the University of Reading, said she was approached by representatives from the museum while attending a protest near Parliament Square in central London. She says she gave her placard, which featured an image of the Earth as a melting ice-cream cone alongside the words “Keep It Cool”, to a Science Museum representative with the understanding it would be retained in its collection.

May says she was stunned when the UKSCN contacted her on Twitter to inform her it had been used in the Shell-sponsored exhibition. “I was shocked and a bit let down because I thought I was being involved in something helpful and beneficial for people,” said May.

In a statement, the Science Museum Group said that it acquired several signs for the national collection after a protest in March 2019 and the items were collected by curators in a “professional and sensitive” manner.

“Having today been alerted to the strong feelings of a donor, and in light of all the circumstances around this request, we have decided to remove this item from display and are contacting the donor directly,” it added.

The Science Museum did not confirm whether it would not use the other placards it collected in future events sponsored by fossil fuel companies.

The UKSCN’s Izzy Warren said the Science Museum was increasingly becoming an “outlier” on the issue of oil sponsorship, after it was revealed that its director, Sir Ian Blatchford, was actively seeking funding from fossil fuel companies at a time when many institutions are distancing themselves from such partnerships.

She said: “Anything else that the museum says about wanting to become carbon neutral or wanting to educate the public, that is redundant and irrelevant as long as they’re still providing these oil companies with the social licence to operate.”

In July, Channel 4 News revealed that the Science Museum had signed a “gagging clause” which prevented the institution from “damaging the goodwill or reputation” of Shell.

Earlier in the summer protesters who had occupied the Shell-sponsored exhibition were removed by police. Similar protests had taken place at the British Museum and Tate Modern after they produced exhibitions sponsored by oil companies, and while those were left to play out, the protesters at the Science Museum were removed.

In April, after the school climate strikers called for a boycott of the exhibition, Shell released a statement saying it had a longstanding relationship with the Science Museum “based on a shared interest in promoting engagement in science – which will be a key enabler in addressing the challenge to provide more and cleaner energy solutions”.

The UKSCN is also demanding that the placards be removed from the Science Museum and installed in the Climate Museum UK, the mobile and digital museum that collects responses to the climate emergency.