One tentative plan under consideration, according to a source familiar with the discussions, calls for the New York Democrat to file cloture Thursday on a motion to proceed to a House-passed legislative vehicle that would be amended next week with the continuing resolution’s contents. That will likely include the energy infrastructure permitting legislation that Sen. Joe Manchin III, D-W.Va., unveiled Wednesday.

When cloture “ripens” for a vote — likely Tuesday, when senators reconvene and Democratic leaders aim to unveil the substitute amendment, assuming weekend negotiations produce agreement — it would require 60 votes to get on the motion to proceed.

If Democratic leaders can’t reach that number of votes because of opposition to the permitting language or other matters, Schumer could change his cloture vote to “no,” a procedural move that would allow a do-over vote on the motion, with the intent to strike the permitting measure or other offending provisions.

If cloture is achieved on the motion, there would be up to 30 hours of debate before a simple majority vote to adopt the motion to proceed and get on the bill itself. Then another cloture motion at a 60-vote threshold would be required, with another 30 hours allotted for debate on the underlying bill — if time isn’t yielded back sooner — followed by a simple majority vote on passage.

The vehicle for the CR hadn’t been settled on, but Schumer has options, including House-passed legislation to cap cost-sharing for a month’s supply of insulin at $35. That measure would limit insulin copays under private insurance and Medicare; the cap for Medicare beneficiaries has already become law separately as part of the climate, health care and tax reconciliation law.

Depending on the vehicle ultimately used, however, a third cloture vote could be required. The CR would have material that’s nongermane to the underlying insulin bill, for example, if that’s the vehicle chosen, which would mean an extra cloture vote is needed on the substitute amendment.

Some GOP senators haven’t ruled out objecting to a time agreement to speed up votes next week by yielding back debate time. “We’ll see what’s happening,” Sen. Rick Scott, R-Fla., said Wednesday. Scott is among 14 Republicans who signed a letter opposing any stopgap bill that doesn’t run into the new year, when they think one or both chambers will be in GOP hands.

Nonetheless, in theory the tentative plan to start the process this Thursday could lead to a final Senate vote by next Friday, when the current fiscal year expires. It might even enable the House to take up the Senate-passed bill and clear it in time to beat the midnight deadline.

All that assumes everything goes according to plan and that there’s an acceptable stopgap funding package that can pass in both chambers. None of those details have been released, but top appropriators and other lawmakers said Wednesday there’s no talk yet of a very short-term CR to buy more time.

If lawmakers miss the deadline, federal agencies would need to start winding down operations without appropriations in place, but they have flexibility to delay implementing some partial shut down actions over the weekend if a funding bill is on its way toward clearing Congress.

Appropriators and leaders are still negotiating supplemental funding and other anomalies that may be added to the CR. But the bigger obstacle to Congress meeting the Sept. 30 deadline is Manchin’s permitting overhaul that Schumer has pledged to attach to the stopgap bill, over objections from rank-and-file Democrats in both chambers.

Sen. Jeff Merkley, D-Ore., is circulating a letter requesting that the Senate hold a stand-alone vote on Manchin’s bill. More than 80 House Democrats sent a similar letter asking Schumer and Speaker Nancy Pelosi, D-Calif., to keep the permitting measure off the CR.

“If our colleagues across the aisle want real permitting reform, Sen. Capito’s fantastic bill only needs Sen. Manchin plus nine more Democrats to clear this chamber,” McConnell said. “Otherwise it would appear the senior senator from West Virginia traded his vote on a massive liberal boondoggle in exchange for nothing.”

(David Jordan contributed to this report.) 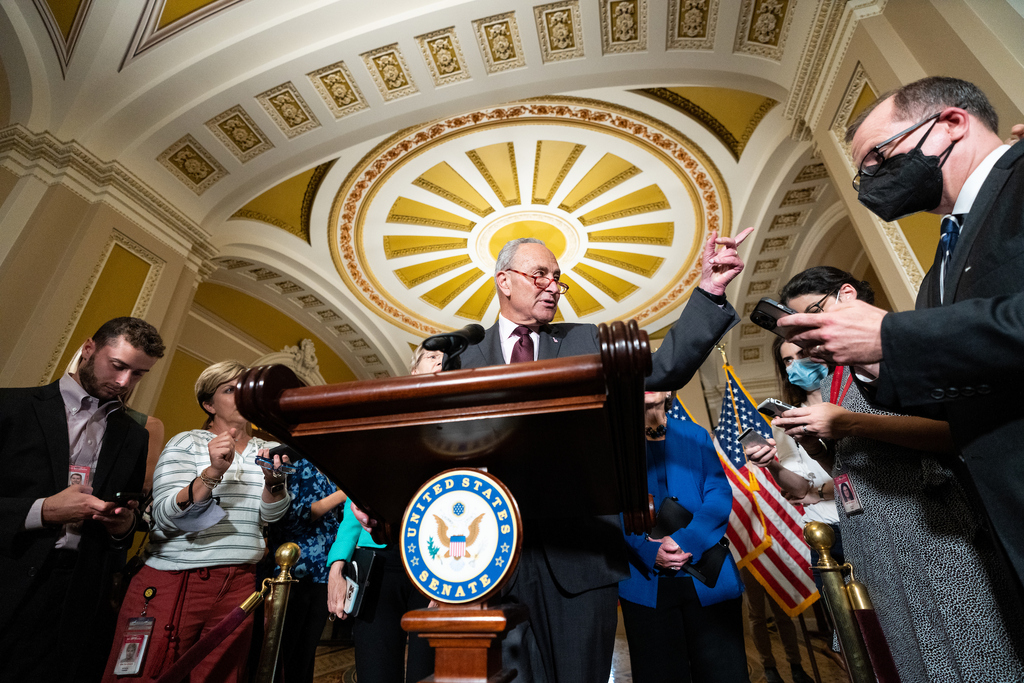 Sen. Joe Manchin III's legislation to overhaul the federal permitting process got a GOP endorsement, but Democrats lined up in…

The measure will likely include Ukraine aid and leave out Covid and monkeypox money, but a deal over energy permitting…

Sen. Joe Manchin on Tuesday railed against what he called “revenge politics″ being used against him, as liberals in the…