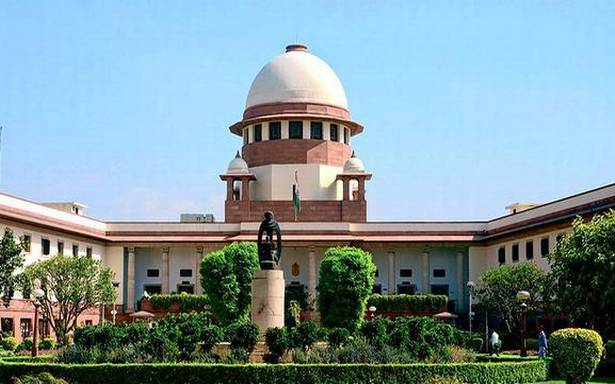 The Supreme Court has agreed to examine the legal issue of whether the Enforcement Directorate can attach ancestral properties of the accused under the Prevention of Money Laundering Act (PMLA) as "proceeds of crime". The question came up for consideration before the top court on an appeal filed by the Enforcement Directorate (ED) challenging an order of the Karnataka High Court which observed that action under the Prevention of Money Laundering Act, 2002 cannot proceed in respect of the ancestral property.

The High Court had also quashed the proceedings against two accused in the case.

An apex court bench of Justices A.M. Khanwilkar and C.T. Ravikumar in its October 8 order issued notice to the accused on the appeal of the ED and sought their response within four weeks.

Additional Solicitor General S.V. Raju, appearing for ED, submitted that the high court has committed manifest error in observing that action under the PMLA cannot proceed in respect of ancestral property of the writ petitioners. The ASG said the observation of the high court is contrary to the very definition of "proceeds of crime" in Section 2(1)(u) of the 2002 Act.

As per this definition, "proceeds of crime" means any property derived or obtained, directly or indirectly, by any person as a result of criminal activity relating to a scheduled offence or the value of any such property or where such property is taken or held outside the country, then the property equivalent in value held within the country.

The high court in its order had dismissed proceedings initiated against the first accused noting that he died during the pendency of the petitions and quashed the prosecution instituted against the second accused pending before Principal Civil and Sessions Judge, Bangalore.

It had also set aside attachment proceedings in respect of family properties belonging to petitioners in the Mysore district.

A charge sheet was filed against accused No.1 for the offences punishable under Sections 406 (criminal breach of trust.) and 420 (cheating) of the Indian Penal Code alleging that under two agreements he agreed to supply 50,000 metric tonnes of iron ore to a Government Undertaking (M/s.Mysore Sales International Limited). Pursuant to the said agreements, a letter of credit was opened and a sum of Rs 1.15 crore and another sum of Rs 1 crore were transferred to the bank account of accused No.1; but after transfer of the said amount, accused No.1 failed to supply iron ore and thereby committed breach of trust and caused loss to M/s. MSIL Company.

Based on the above charge sheet/report, a complaint was filed seeking prosecution of accused Nos.1 and 2 under Section 3 of the PML Act. The complaint stated that the investigations so far revealed that accused no 1 criminally conspired to obtain an advance of ₹2.15 crores by avoiding having a registered mortgage of the properties offered as security. It also claimed that the accused did not keep sufficient funds in the Bank when his cheque was presented for payment and thereafter entered into an agreement to sell the property and to gift the property to his daughter and wife. The complaint stated that thus the funds so advanced are the proceeds generated out of criminal activity related to the scheduled offence under PMLA and hence, these are proceeds of crime.

The high court noted that the allegation made in the complaint would only go to show that accused No.1 had failed to honour the terms of agreements and had failed to return the advance amount to M/s. MSIL and the cheques issued by him have been dishonoured. "These allegations may give rise to the prosecution under Sections 406 and 420 of IPC, but by the said acts, it cannot be said that accused No.1 was involved directly or indirectly in any process or activity connected with the "proceeds of crime".

For constituting an offence of money-laundering, the offender must directly or indirectly attempt to indulge or knowingly assist or knowingly is a party or is actually involved in any activity connected with the "proceeds of crime", the high court said.

The high court had said that there is nothing in the complaint or in the charge sheet filed against accused No.1 to suggest that either accused No.1 or any other accused persons were involved in the criminal activity connected with the failure to return the advance amount of ₹2.15 crore. "Coming to the proceedings initiated against the petitioners-accused Nos.1 to 3 are concerned, a reading of the averments made therein would go to show that the properties sought to be attached are the family properties of accused No.1.”