New Delhi: Supreme Court on Wednesday allowed the Central government to re-examine and reconsider the provisions of Section 124A of the IPC which criminalises the offence of sedition.

Sedition Law: SC allows the Central government to re-examine and reconsider the provisions of Section 124A of the IPC which criminalises offence of sedition. Supreme Court says till the exercise of re-examination is complete, no case will be registered under 124A.#SupremeCourt pic.twitter.com/Lveu35YLug

A bench of Chief Justice of India NV Ramana, Justices Surya Kant and Hima Kohli also asked the Central government and States not to register any cases under Section 124A.

It added that if such cases are registered in future, the parties are at liberty to approach the court and the court has to expeditiously dispose of the same, the bench added.

The apex court also said that those already booked under Section 124A IPC and are in jail can approach the concerned courts for bail.

“It would be appropriate to put the provision on abeyance,” the bench ordered.

Allowing the Central government to re-examine and reconsider the provisions of Section 124A, the apex court said that it will be appropriate not to use the provision of law till further re-examination is over.

The bench now posted the hearing of a batch of pleas challenging the constitutional validity of the sedition law, in July.

In its order, the bench stated, “The court is cognizant of the duty of the State on one hand and citizens’ civil liberties on the other. There is a requirement of the balance of consideration. The case of the petitioner is that this provision of law dated back to 1870 and is being misused. The Attorney General had also given instances of glaring misuse like cases registered for a recital of Hanuman Chalisa.”

“It is clear that the Central government agrees that rigours of Section 124A is not in tune with the current situation and it was intended for the time when the country was under colonial law. Thus Centre may reconsider it… it will be appropriate not to use this provision of law till further re-examination is over. We hope Centre and States will desist from registering any FIR under 124A or initiate a proceeding under the same till re-examination is over,” it added.

At the outset of the hearing Solicitor General, Tushar Mehta appearing for the Centre told the top court government cannot prevent police from registering a cognisable offence under sedition provision, but an FIR under Section 124A would be registered only if the area Superintendent of Police (SP) is satisfied that facts of a case involve sedition offence.

“Once there is cognisable offence and it is held valid by Constitution bench then staying the effect may not be the correct course of action. that is why responsible officers must take responsibility. His satisfaction would be subject to judicial review before a magistrate,” Mehta submitted.

Solicitor General said pending sedition cases can be reviewed during the re-examination process of the provision by the Centre for early grant of bail to those booked under Section 124A IPC.

Yesterday, the top court asked the Centre to inform it if the registration of future cases for sedition can be kept in abeyance till it completes the reconsideration process with respect to sedition law. It had also asked the Central government what it proposes to do about pending and future sedition cases as the Centre decided to re-examine the validity of Section 124A.

On Monday while filing a fresh affidavit, the Centre told the apex court that it has decided to re-examine and reconsider the provisions of Section 124A and requested it not to take up the case till the matter is examined by the government.

During the hearing yesterday senior advocate, Kapil Sibal appearing for petitioners told the bench that the then Prime Minister Jawaharlal Nehru had termed Section 124A as the most obnoxious provision aimed at stifling dissent and Mahatma Gandhi had termed this as a most potent weapon to silence opposition to govt.

Solicitor General Mehta replied that this government is trying to do what Pandit Nehru could not do then.

“What the government headed by Nehru Ji could not do, we are doing it now,” Solicitor General had said.

In the affidavit, the Centre said that Prime Minister Narendra Modi is of the firm view that the baggage of colonial-era laws, which outlived their utility, must be scrapped during the period of ‘Azadi Ka Marti Mahotsav’ (75 yrs of independence).

In that spirit, the government of India has scrapped over 1500 outdated laws since 2014-15, it said on Monday.

However, on Saturday the Central government told the Supreme Court that the 1962 verdict of the five-judge Constitution bench case which upheld the validity of the offence of sedition under Section 124A of the Indian Penal Code, is binding and continues to be is a “good law and needs no reconsideration”.

It had said that the 1962 five-judge bench judgement of the top court in the Kedar Nath Singh v/s State of Bihar case which upheld the validity of Section 124A of IPC has stood the test of time and applied till date in tune with modern constitutional principles.

It said the 1962 verdict is a good precedent and that it requires no consideration and isolated instances of misuse cannot be a ground to uproot the precedent that has withstood the test of time for over six decades.

The Centre further submitted that a three-judge bench cannot hear a legal challenge to Constitutionality of Section 124A and only a bench of co-equal strength of Kedar Nath Singh can pose any doubts on the verdict.

Earlier, the bench had said that it will first decide the issue of whether the petitions challenging the constitutional validity of Section 124A to be referred to the larger bench or not.

Last year, CJI Ramana had questioned the Central government on the requirement of sedition law even after 75 years of independence and observed that it was colonial law that was used against freedom fighters.

While pointing out that sedition law was used against freedom fighters like Mahatma Gandhi and Bal Gangadhar Tilak, the apex court had asked Attorney General KK Venugopal, appearing for the Centre, why it can’t be repealed. It had observed that the Centre has repealed many stale laws and enquired why the government is not looking into repealing Section 124A (which deals with the offence of sedition) of the IPC.

It had further said that the court was concerned about the misuse of such laws.

CJI had said, “use of sedition is like giving a saw to the carpenter to cut a piece of wood and he uses it to cut the entire forest itself”.

The top court had further told Attorney General that the conviction rate under Section 124A is very low.

Section 124-A (sedition) under the IPC is a non-bailable provision.

Earlier, a different bench of the top court had sought a response from the Centre on a plea challenging the Constitutional validity of sedition law, filed by two journalists — Kishorechandra Wangkhemcha and Kanhaiya Lal Shukla — working in Manipur and Chhattisgarh respectively. (ANI) 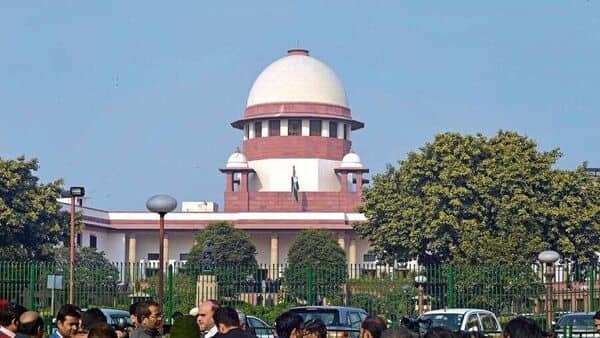 Livemint
One subscription that gives you access to news from hundreds of sites
Telling truth is patriotism, not treason: Rahul Gandhi hails SC order on sedition law