Sanders wins big in Nevada but some Democrats worry

By Andrew MARSZAL with Brian Knowlton in Washington

Las Vegas (AFP) - Bernie Sanders' landslide victory in Nevada's Democratic nominating contest has scattered his moderate challengers and injected his White House campaign with a fresh burst of momentum as he drives into the next crucial battlegrounds.

With his strong result Saturday, the Vermont senator demonstrated an ability to broaden a coalition beyond the narrow limits of leftist voters, undercutting the argument from several moderates that he would not be able to bridge the divide between progressives and centrists.

"He showed last night that he can energize our core base," Howard Dean, a former presidential aspirant himself and former head of the Democratic National Committee, told CNN.

As of Sunday evening, Sanders was comfortably ahead in Nevada with 72 percent of precincts reporting.

The 78-year-old senator was leading the Democratic pack with 47.1 percent of the vote, followed far behind by former vice president Joe Biden at 20.9 percent and Pete Buttigieg, the former mayor of South Bend, Indiana, at 13.6 percent.

Sanders was quick to claim victory, saying his "multi-generational, multi-racial coalition" was "going to sweep this country."

Dean said the senator's result in a state far more typical of America's demographic variety than the two earlier-voting states was "incredibly impressive."

But he quickly added that a more definitive result will come only after voters in 14 states cast ballots on March 3, or "Super Tuesday."

Before that comes South Carolina, which votes on February 29.

Biden's once-strong prospects had faded sharply for weeks, but he said Saturday that he felt "really good" about his second-place showing in Nevada and shouldn't be counted out.

His team is banking on a strong showing in South Carolina, where Biden has enjoyed support among a majority-black Democratic electorate.

But Biden's lead over Sanders in that state is evaporating quickly.On Sunday, a RealClearPolitics average of national polls gave Biden just a 3 point lead over Sanders at 24.5 percent, compared to 12.5 points 10 days ago.

After Sanders came in virtually tied for first in Iowa and then won in New Hampshire, his undeniable victory in Nevada places him squarely in the driver's seat, at least for now.

He leads national polls by an 11-point margin over Biden and by 13 points over Mike Bloomberg, the former New York mayor who skipped the early voting states to focus on Super Tuesday.

Sanders's progressive policies, including universal health care, higher taxes on the wealthy and an increase in the minimum wage, have struck a chord with millions of Americans.

But some Democrats say those policies will make him an easy target for President Donald Trump as a radical leftist, and that if he heads the Democratic ticket in November, the party could face sweeping losses.

Trump on Saturday issued a sarcastic-sounding congratulations on Twitter to the man he calls "Crazy Bernie."

Asked if the Democrats' majority in the House of Representatives might be threatened if Sanders turned out to be Trump's rival in November, one powerful South Carolina Democrat said that it might.

It "would be a real burden for us in these states or congressional districts that we have to do well in," said James Clyburn, the House Democratic whip.

"In those districts, it's going to be tough to hold onto these jobs if you have to make the case for accepting a self-proclaimed Democratic socialist."

Buttigieg, while congratulating Sanders on his Nevada victory, offered a stern warning against picking someone who he said sees "capitalism as the root of all evil" to go up against the populist president.

Buttigieg's campaign on Sunday called on the Nevada Democratic Party to rectify what it said were "material irregularities" in the vote count and to hold off on releasing final results.

Given the size of Sanders' lead, the request was not expected to provoke the same drama as the earlier confusion in Iowa over that state's results.

Regardless, pressure seems certain now to grow on some lower-polling Democratic moderates to withdraw to allow others to coalesce around a centrist who might fare better against Trump.

Republican campaign advisor Mark McKinnon, speaking on CNN, predicted that some lagging candidates will be flushed out of the race after Super Tuesday.

But the centrist alternatives face steep challenges, he added: Bloomberg performed notably poorly in Wednesday's Democratic debate, and "Biden does not have the resources."

Progressive candidate Warren vowed on Saturday to stay in the race despite a third straight mediocre showing.

She renewed her attacks on Bloomberg, accusing him of trying to "buy this election."

Bloomberg has plowed a record $438 million of personal funds into his campaign. 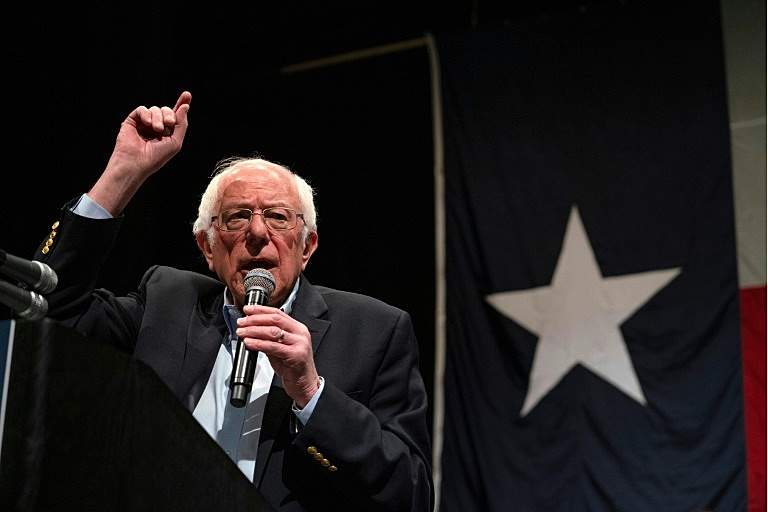