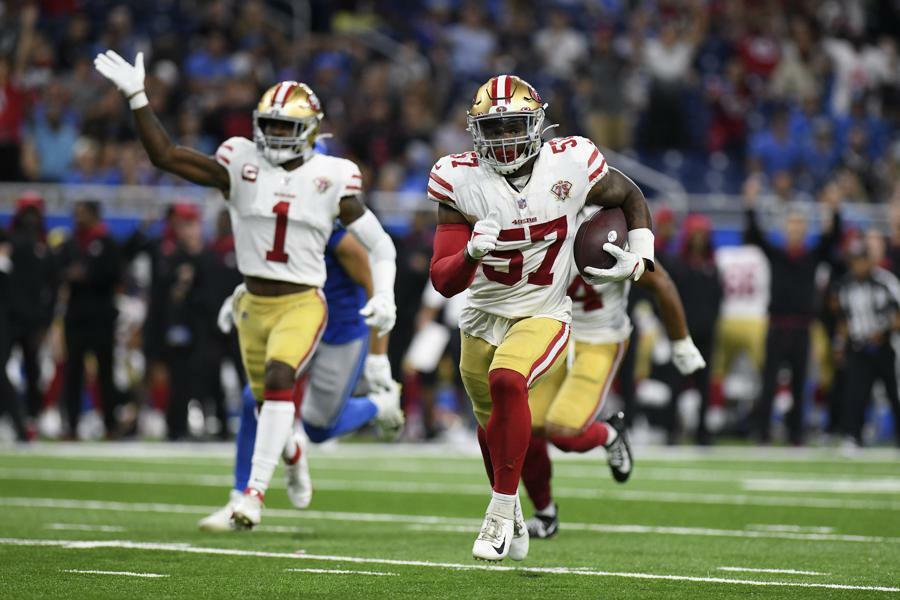 One calendar year later, and it seems to be much of the same for the San Francisco 49ers. The results were a tad different as Kyle Shanahan and Co. opened the 2021 NFL season on the road against the Detroit Lions Sunday afternoon.

However, that’s not necessarily the story relating to San Francisco’s much-needed season-opening win. Rather, it was all about the injury bug biting this team in the back end once again.

Starting running back Raheem Mostert exited in the first quarter with a knee injury. He was followed to the locker room by Pro Bowl cornerback Jason Varrett, who the 49ers fear suffered a torn ACL.

For Verrett, it was an absolutely horrible scene at Ford Field. The former San Diego Chargers first-round pick returned to full health last season, performing at an incredibly high level after playing in a combined five games the previous four years. Verrett was emotional on the field before he was joined by 49ers general manager John Lynch in heading to the locker room.

"It's crushing," Shanahan told reporters after the game. "We're hoping for the best, but it's crushing. The bad luck he's had and putting together these last two years staying healthy and how good of a camp he had... I have got a lot of love for JV and respect him as much as anyone I've ever been around. So, I'm really hurting for him."

From a team-wide perspective, Emmanuel Moseley was already absent for the game to injury. Recently-signed former Pro Bowler Josh Norman was inactive because he was not yet ready to take to the field.

This coincided with Jared Goff throwing for nearly 300 yards in the second half, almost leading Detroit back from a four-touchdown deficit. Rookie corners Deommodore Lenoir and Ambry Thomas did the heavy lifting with the latter giving up a long touchdown. Recently called up from the practice squad, Dontae Johnson also saw a ton of action in the second half.

That’s the bad news. There’s, however, some good news. Let’s look at some takeaways from the 49ers’ 41-33 season-opening win against the Lions in Detroit.

San Francisco has the ability to put up a lot of points. We saw that in the first half Sunday. The team had 31 first-half points. That very same span saw the 49ers’ offense run just two plays on third down. It’s the genius of one Kyle Shanahan.

However, turnovers from the quarterback position have been a major issue. After a mix-up with center Alex Mack on his first drop back led to a fumble, Garoppolo was flawless. The quarterback completed 17-of-25 passes for 314 yards with a touchdown and zero interceptions. San Francisco is going to need much more of this from Garoppolo moving forward when it takes on better opponents.

It’s not going to be easy replacing the legend that is Robert Saleh. A first-year defensive play-caller, Ryans found that out first-hand against the Lions on Sunday.

Whether it was Detroit’s rushing attack gashing the 49ers to no end (116 yards, 4.8 average) or the lack of blitzes, this game represented a major wake-up call for Ryans. That was magnified after multiple 49ers starters on the defensive side of the ball went down to injury in the second half. Saleh was able to scheme to this unit’s strengths. To an extent, we didn’t see that from the Ryan-led unit on Sunday.

Jared Goff was hit nine times on 60 drop backs Sunday afternoon. Nick Bosa and Dee Ford both got to the quarterback with a sack after they played a combined three games a season ago.

More than the performances we saw from out on the edge, the interior of San Francisco’s defensive line did a tremendous job helping break down the pocket in a big way. Arik Armstead had a whopping 10 pressures despite barely showing up on the stat sheet. Kentavius Street recorded his first ever NFL sack and got to Goff for two hits. This type of performance will be needed given the 49ers’ issues at cornerback.

Ahead of Sunday’s game, rookie third-round pick Trey Sermon from Ohio State was a surprise inactive. Sermon had been getting first-team running back reps during the summer. He was listed as the 49ers’ RB2. Despite this, rookie late-round pick Elijah Mitchell was active over his counterpart. The reasoning was simple. Shanahan noted that Sermon was not one of San Francisco’s top-three backs during training camp.

This move paid off big time with Mitchell putting up the best career debut for a 49ers running back in history. The rookie sixth-round pick gained 104 yards and a touchdown on 19 attempts.

At wide receiver, it was also a pretty big surprise that Trent Sherfield lined up opposite Deebo Samuel when the 49ers went to that specific package. A surprise performer during training camp, the free-agent signing ultimately scored the 49ers’ first touchdown of the season on a pass from Trey Lance. He was in the game in favor of 2020 first-round pick Brandon Aiyuk.

As for San Francisco’s hierarchy at the skill positions, Deebo Samuel had himself an absolutely brilliant 2021 debut. He recorded nine receptions for 189 yards and a touchdown on 12 targets. Despite a late-game fumble that kept Detroit alive, this performance had to be seen as eye-opening for the 49ers’ brass.