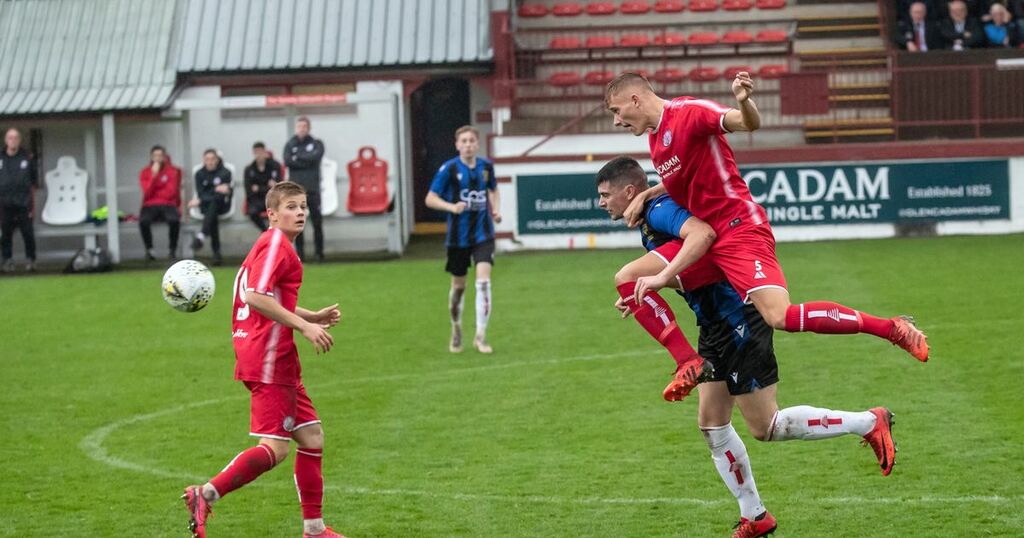 And he knows this season’s experience on loan at Brechin City will prove invaluable for his development in the game.

Denham, still just 18, has now played four times since arriving at the Glebe Park side and savoured his first clean sheet on Saturday afternoon. The towering centre-half produced a composed and comfortable display in the 1-0 home victory against Huntly.

“It was good to get the clean sheet,” Denham smiled. “That is the first one in four games since coming to Brechin.

“I knew it wasn’t going to be the prettiest of games but it was just nice to be able to get the three points.

“We’d had a really hard and physical game on the Wednesday night against Inverurie. But I’m getting used to that and have been enjoying it. I’m loving it so far at Brechin.

“I was at Edinburgh City at the end of last year and got a few games under my belt, but not too many. I’m now at Brechin to get as many games as possible. That’s exactly what I’m doing at the moment.

“I want to help them keep winning, stay in the team and see where that takes us by the end of the season. I’ll get a lot out of playing first-team football and against experienced strikers. I’ll be playing against different types of strikers too.”

Denham’s transition into the new dressing room was made easier by having two of his Perth pals beside him in goalkeeper Jack Wills and midfielder Max Kucheriavyi. Both also played against Huntly and impressed, with Kucheriavyi scoring the winner.

“Max got a little bit lucky with his penalty on Saturday but, apart from that, I thought he was really good,” laughed Denham. "I think there’s been a few of the young supporters loving Max and they’ve had the Ukraine flags.

“Walking into a new club you will always have a few nerves. But having Max and Jack here too has been great.”

A friendly Brechin dressing room - and one with plenty of experience - has also helped make the move seamless. Beside Denham in a defensive three at the weekend was Iain Davidson, previously of Dundee and Raith Rovers.

“It’s really good to have Iain next to me,” Denham said. “He is 37 now, has a lot of experience in the game and can talk me through things. He always keeps me tuned in and keeps me concentrated.

“Playing three at the back allows me to step into the game more and drive forward. I’m enjoying that. It’s something the gaffer at St Johnstone has tried to bring out in my game. I think my use of the ball has been better.

“Callum Davidson will drop me a text after a game and I’m obviously still in training, so I speak to him during the week. Training is always really good and every day you need to be on it. It’s always a high level and a high intensity.

“Liam Gordon and Jamie McCart talk to me and are always trying to help. Liam Craig is always giving me pointers too.”

Of course, Denham’s mission is to return from a successful loan spell at the end of the season and then push for a starting place at Saints. He was on the bench for last season’s League Cup final and was heavily involved with cup double-winning celebrations.

Denham said: “Last year I was lucky enough to be in the squad for the League Cup final and that was amazing.

“These kind of things don’t come around too often so to be part of it all was really special. For me personally, that is what I need to aspire to and try to get to that level.”