As the preseason kicks off, this is an opportunity for many to realize their dreams of being NFL players. On strong rosters like the New Orleans Saints, those chances can be slim. The wide receiver room is a prime example in New Orleans. With Michael Thomas, Jarvis Landry, Chris Olave and Deonte Harty all seemingly locks, there may only be one spot remaining for a slew of talented pass-catches. But that won’t stop the remaining wideouts from doing everything that they can to turn their dream into reality. Here are ten players, including some of those receivers, who need a big game on the road against the Houston Texans to keep their NFL ambitions alive.

There were higher expectations than usual for Smith going into 2021. Though he was missing in action for the early portion of the season with an injury, there was reason to believe that he would be the wideout that could separate himself from the pack once on the field. He had multiple years in the system, what seemed like a great connection with quarterback Jameis Winston, and loads of opportunity ahead of him with Thomas sidelined to start the year, and eventually the season. But pulling in just 32 receptions for 377 receiving yards and 3 touchdowns catches didn’t necessary achieve that. Now, with three new starters in the building and several talented young players nipping at his heels, Smith has to show up and produce immediately to hold on to his roster spot.

Greenidge is in a similar boat as Smith. There is a mass of new and young talent on the roster across the offensive line with clear starters ahead. The former Villanova tackle has been an organizational favorite in the past, but with new coaches in the building, he won’t be able to bank on that. Only performance will keep him on a roster that sports tackles like Ryan Ramczyk and James hurst with rising youngsters Trevor Penning and Landon Young.

Jones had a fantastic training camp, preseason and Week 1 performance last one, one that allowed the Saints to feel comfortable moving on from veteran back Latavius Murray. Now, he’s deeply entrenched in a competition for the team’s third running back spot behind Alvin Kamra and Mark Ingram. Jones will need to reprise his role as preseason stud and fast. Devine Ozigbo, Dwayne Washington and Abram Smith are right behind him.

From Edna Carr High School to Nicholls State and now a New Orleans Saint, Dixon has a ton of talent and has excited throughout training camp. Head coach Dennis Allen mentioned him as a player that has caught his eye from offseason team activities (OTAs) and onward. But he’s in the same crowded room as Smith and last year’s starter Marquez Callaway. Taking advantage of the live reps he’ll see in game action against the Houston Texans will be the start of what he needs in order to ascend the depth chart.

I used to consider Callaway a lock on this roster as either the fourth or fifth receiver kept on the depth chart. I’m still willing to make that prediction for now, but Callaway will need to show up against the Texans to maintain his spot. He was a preseason superstar with a pair of outstanding touchdown catches against the Jacksonville Jaguars last year. He played his part in solidifying Winston as the starting quarterback going into the season. Now, he’ll need to be the main character in his own story, solidifying his spot on the roster.

With Kentavius Street now in the building, the Saints may love the idea of turning to a player with more NFL experience next to starter David Onyemata. Tuttle is another player that watched his position room bolster over the offseason. He’s the benefactor of familiarity, yes. But he’ll have to capitalize on that trust a bit to keep things going his way.

Another local prospect that has caught the eye of his new head coach. Merritt is gong into his second NFL season with his second NFL team. There’s no doubt that he’d like the transaction history on his player pages across the internet to stop there. The Destrehan native is back home and is ready to showcase his speed and what have been outstanding hands throughout camp under the lights. Whether fighting for a roster spot or a practice squad spot, Merritt, like Dixon, has a lot of ways he can express his value. Getting a strong at NRG stadium would go a long way.

Bill Streicher-USA TODAY SportsThe veteran safety arrived in New Orleans when safety was a definite need. Before the additions of Justin Evans and Tyrann Mathieu, following the departure of Marcus Williams as rumors swirled around Malcolm Jenkins. Now, his best hope is to find the field as a veteran leader and core special teamer. Something he’s shown he can do throughout camp, but the full-speed action of the NFL will pick up and he’ll be put to the test tonight.

The tight end room carries a lot of intrigue for the Saints with former starting quarterback Taysom Hill now in the mix. Hill has been managing an injury of late and therefore won’t be seen against the Texans Saturday night. That should open up some reps for Vannett who will try to outpace Juwan Johnson and Lucas Krull, two very exciting pass-catchers. Vannett’s edge will be setting the edge in the run game and showing his value as a premier blocker.

One last wideout to highlight, though not the last on the list. Winston has an interesting angle or two on his side. He has a year in the system under his belt, a good relationship with his quarterback and special teams returner ability. If the Saints should like to have someone on the roster who can pick up that role in place of Harty, Winston could be the insurance they need. He’ll get a chance to showcase his ability to impact from multiple areas of the game. 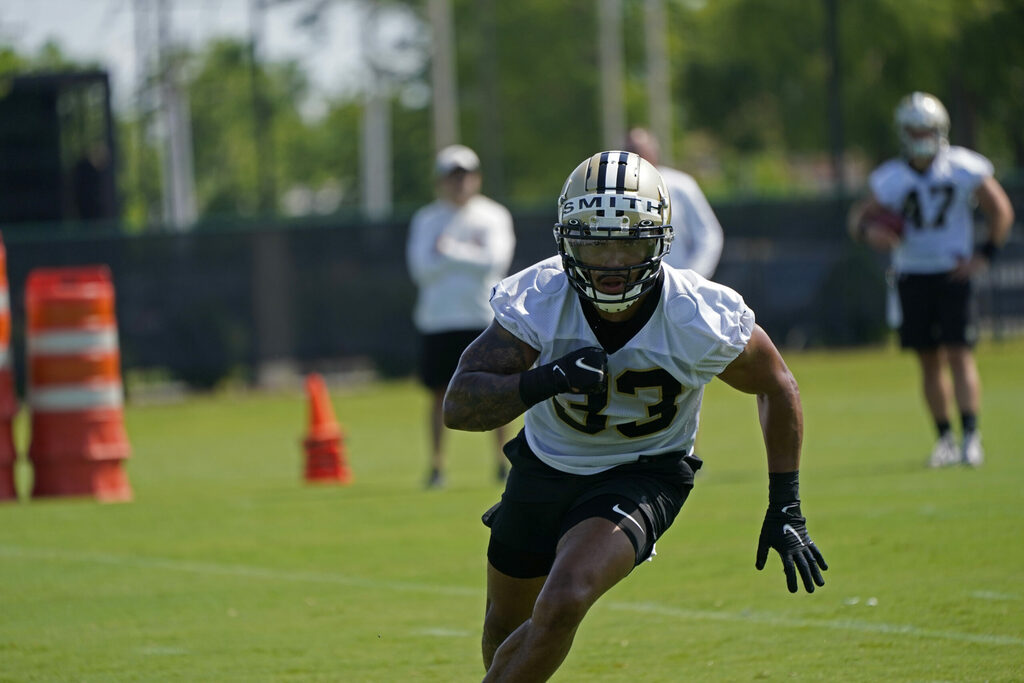 USA Today Sports Media Group
From analysis to the latest developments in health, read the most diverse news in one place.
6 veterans with a lot on the line in Saints preseason opener

Saints veterans like Nick Vannett, Ethan Greenidge, and Kevin White need to impress against the Texans, via @RossJacksonNOLA:

Fans and analysts on Twitter react to the Saints' preseason loss on the road against the Texans. The best reactions:

The Bears kick off the preseason against the Chiefs on Saturday, and there are a number of players vying for…

USA Today Sports Media Group
One place to find news on any topic, from hundreds of sites.
Eagles’ 53-man roster predictions after the first preseason game