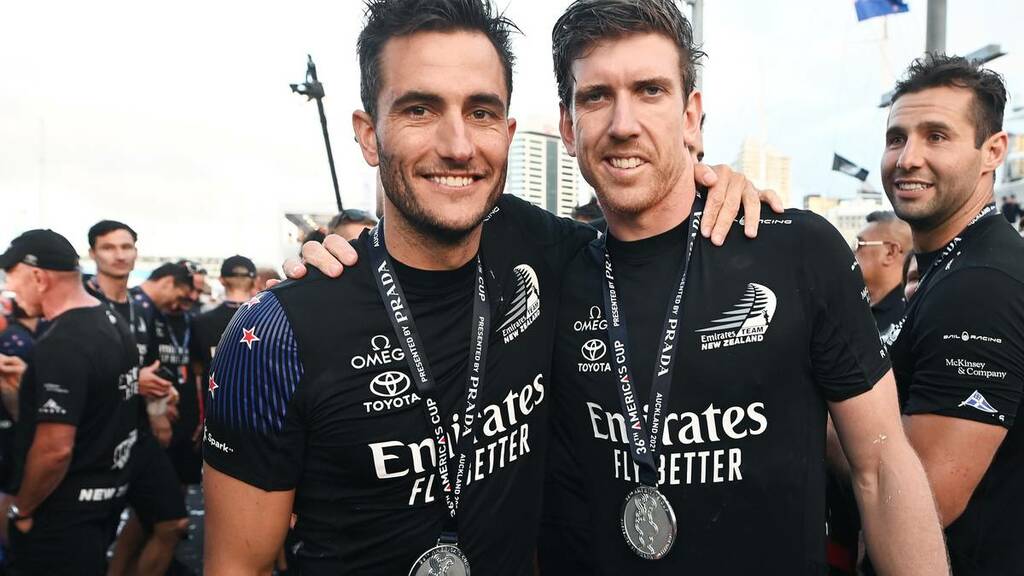 Peter Burling and Blair Tuke say they are waiting for "clarity" around the 37th America's Cup defence before re-signing with Team New Zealand.

The Kiwi sailing duo, who have been competing in Europe for the New Zealand SailGP team following their 49er silver medal at the Tokyo Olympics, are off contract with Team NZ in December.

In a joint statement to the Herald, Burling and Tuke said they have been in "regular conversation" with Team NZ over their futures but have yet to put pen to paper.

"It's been a busy year. Since AC36 we've been overseas dedicated to representing New Zealand at the Olympic Games and a big European leg with the NZL SailGP Team, as well as continuing our work with Live Ocean," Burling and Tuke said in a written statement.

"We're supportive of Team New Zealand management's efforts to ensure a successful defence of the America's Cup and respect the complexities the next event will bring in a post-Covid world.

"As you can appreciate, we'd like clarity on the fundamentals of the event before we commit. We're in regular conversation with the team as the process is worked through."

Details around the 37th America's Cup are still yet to be confirmed, with the protocol due to be published on November 17.

Last month, the Royal New Zealand Yacht Squadron and Team NZ announced that the hosting decision for the next America's Cup, which was set to be made on September 17, would be delayed to allow more time to find the right venue, including a last-ditch bid to keep the Cup in Auckland.

Three international candidates – Cork in Ireland, Barcelona in Spain and Jedda In Saudi Arabia – are also reportedly being considered as hosts.

However, hopes of an Auckland defence took a hit after Team NZ boss Grant Dalton said he had ceased all correspondence with Kiwi rich-lister Mark Dunphy, who was behind a late bid to keep the Cup on home waters.

Dalton claimed Dunphy, who is chairman of Greymouth Petroleum, refused to answer questions the syndicate put to him regarding his campaign for the 37th Cup to be hosted in New Zealand.

It followed a public back-and-forth between the two parties over a possible home defence, including claims from Team NZ that Swiss billionaire and Alinghi boss Ernesto Bertarelli was involved with a possible New York Supreme Court action and the America's Cup Kiwi Home Defence campaign, which Dunphy has denied.

Dalton said he was "disappointed" by Dunphy's "underhanded and deceitful attempts to undermine the RNZYS, ETNZ and the RYS with his despicable actions".

"We gave him every opportunity to tell us himself, but he chose not to and as far as we are concerned this puts an end to a regrettable chapter in AC37."

Dalton has yet to close the door on a possible Auckland defence but has said that Dunphy will play no part in it.

Burling (helmsman) and Tuke (foils controller) were members of Team NZ's America's Cup triumphs in 2017 and 2021.