If Labor’s candidate in the south-west Sydney seat of Fowler, Kristina Keneally, is worried that being seen as a blow-in that could cost Labor one of its deep red jewels, it certainly isn’t showing.

“I’m energised,” she says. “I love doing this.” She greets people as they arrive at Fairfield Leisure Centre, the largest of the pre-poll places in the electorate on Thursday.

Surrounded by an army of people in Labor T-shirts handing out how-to-votes, she’s greeted warmly by voters. As the former premier, she’s well known, even if she has lived until recently outside the electorate.

The presenter of Monk TV, in his saffron robes, is shooting a video for YouTube nearby. He asks if she’ll go on camera to explain to people how to fill out all the squares. Keneally happily obliges.

But despite having a margin of 14% – making it safe Labor – this multicultural seat has become a fierce battleground where dirty tricks and slurs are par for the course and parts of the News Corp media empire are now propelling a narrative that Keneally could lose to deputy mayor, Dai Le, who is running as an independent.

Morrow’s story was based on polling by Laidlaw Campaigns of 618 people in Fowler which according to Morrow, found Keneally’s primary vote was collapsing.

By Tuesday, the polling had become a major story on Sky News. Despite the lack of detail about the poll questions and no disclosure about who had commissioned it, the Morrow story made news bulletins.

One reporter referred to it as “polling commissioned by News Corp” in her report, but this was unable to be confirmed.

Soon it was picked up by Sky’s New’s Paul Murray and Peta Credlin in their programs.

“She’s a fair dinkum independent, not part of the teal tribe or anything like that,” said Credlin, who has led the charge on unmasking any past political affiliations of independents running in safe Liberal seats.

Caroline Di Russo, a SkyNews.com.au contributor, wrote a first-person article online about the importance of being local.

The Guardian has not seen the poll, but according to Morrow it was conducted three weeks ago and found that Keneally’s primary vote was down nearly 13 points to 42%.

But when poll participants were asked further questions “about the importance of living locally and Keneally’s record as premier”, her primary vote fell further, Morrow reported. This put the independent Le in striking distance.

Morrow did not reply to queries nor did the Telegraph’s editor, Ben English.

Polling in individual seats is notoriously difficult because of the difficulty of getting an accurate sample reflecting the demographics of the area.

It’s also important to know who commissioned the poll and the questions asked.

Andrew Laidlaw, the principal of Laidlaw Campaigns did not respond to Guardian Australia.

One of Sky’s most senior reporters took a different tack. Political editor Andrew Clennell got hold of a voice mail from 2019, lodged as part of a formal complaint to the Liberal party, in which Dai Le claimed to “control” the Cabramatta branch of the Liberal party, despite being expelled from the party in 2016.

After Le denied saying such things, Clennell played it on air. There is also footage of Le at a branch meeting in 2019 where a brawl erupted over memberships, along with her husband Marcus Lambert, who remains an official in the local Liberal branch.

Outside the St John’s Park prepoll station, Le insisted to the Guardian that she was a genuine independent. “I was expelled in 2016 for 10 years,” she said.

She denied any Liberal party support saying she had mortgaged her house to run and provide “true local representation”.

Le denied any knowledge of the poll or Laidlaw Campaigns.

There was clearly a wave of support for Le among the predominantly Vietnamese Australians voting at the St John’s Park prepoll. Le and her supporters were greeted warmly and many took only her how-to-vote card.

Those that took Keneally’s how-to-vote were loudly reminded by Le’s offsider, the Fairfield mayor Frank Carbone: “You know she’s from the northern beaches.”

A poster war has also erupted in Fowler, with Le’s campaign running posters featuring Keneally sandwiched between disgraced former Labor politicians, Eddie Obeid and Joe Tripodi, both of whom were found to have engaged in corrupt conduct by the NSW integrity body, Icac.

A counterpunch poster campaign features Le standing next to Scott Morrison and querying whether she is independent.

Whether Le can pull off her challenge remains to be seen. The Laidlaw poll, according to Morrow, has it going down to the wire.

“Fowler’s just so warm and welcoming. People are excited about a change of government,” she says. “They are voting Labor.

“In south-west Sydney, the unemployment rate is double the national average and the cost of housing is the same. Housing overcrowding is a major issue: there are grandparents, parents and children living in the one house, so the help-to-buy plan really matters in south-west Sydney.”

Immigration is also a big issue in the heavily multicultural seat and Keneally is happy to remind voters that she’s likely to be minister for home affairs in a Labor government. 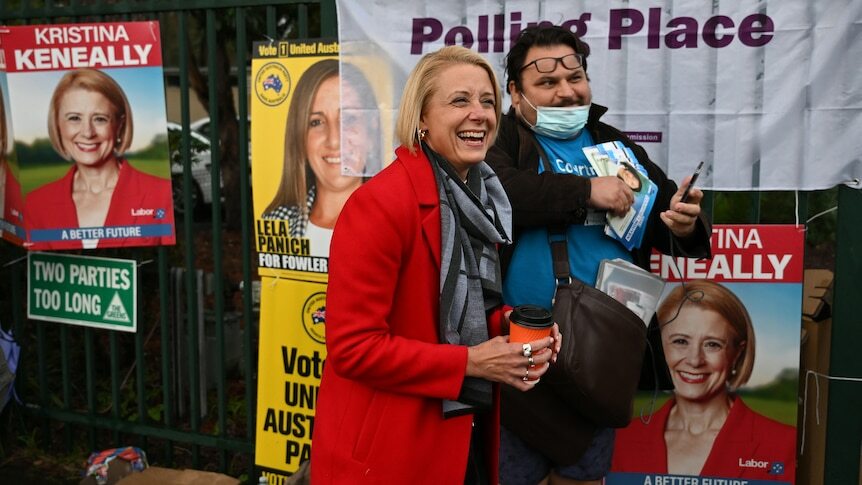 ABC News
One subscription that gives you access to news from hundreds of sites
Kristina Keneally concedes defeat in south-west seat of Fowler, previously held by Labor since 1984

In a blow for Labor, former NSW Premier Kristina Keneally has lost the seat of Fowler to independent candidate and…