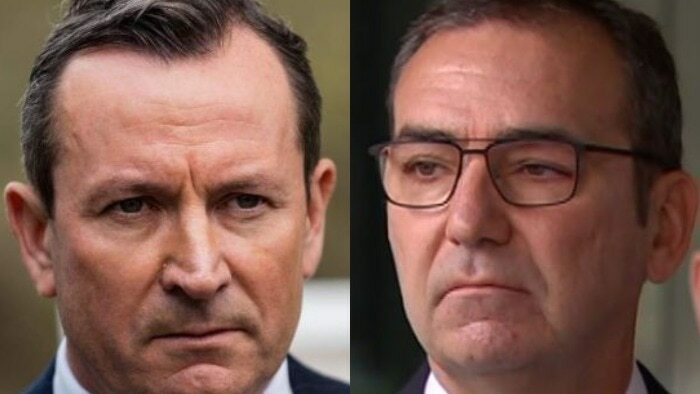 As South Australia looks towards reopening to the eastern states at the end of the year, the decision could see its border close in the west.

In response to that stance, WA Premier Mark McGowan said on Tuesday that he would wait and see what happened but would close the WA-SA border if necessary.

"And if they do, well obviously we'd take health advice, but most likely we would close to that jurisdiction."

When asked to respond to Mr McGowan's comments, Mr Marshall today said WA would be in a "very isolated situation" if it were to close its borders to SA.

"We have got quite a porous border, a highly populated border with Victoria and New South Wales, so it is a different situation," he said.

"There's not a lot of people living along the South Australian-Western Australian-Northern Territory border and so he [Mr McGowan] has got that high level of protection.

Mr Marshall also reiterated SA's commitment to reopen, based on Doherty Institute modelling, once 80 per cent of its population aged 16 and over is fully vaccinated.

"We're going to be working with that modelling to carefully open up here in South Australia," he said.

"We've actually had the lowest number of days lost [to lockdown] of anywhere in the country so I'm just going to continue to back the methodology that we've put in place since day one.

"Other premiers can sort out what they want to do in their state."

Mr Marshall said there was "not going to be a freedom day" in SA, when all border restrictions were removed.

"We are still going to have to have isolation for those people who have got the illness and their close contacts — that's going to be an important part of what we do as we open the borders," he said.

"As we get closer to the 80 per cent double vaccination rate for those 16 and over, we know that we'll be very significantly reducing the transmission of this disease and we also know that when you get this disease after you've been vaccinated you develop far more simple symptoms.

"As we increase the vaccination rates, we reduce the transmissibility, we reduce the risk and we can hope to be working back towards a sort of normalised arrangement in terms of state borders towards Christmas."

Mr Marshall said while the 80 per cent figure remained the target, the aim was to have an even vaccination rate across the state, rather than having some parts with significantly higher rates than others.

"We don't want to just have an average of 80 per cent but have real pockets where there is a lack of balance," he said.

"This is essentially the disease of the unvaccinated."

Federal health data shows that seven of the 10 councils with the lowest vaccination rates in South Australia are in regional areas.

Mr Marshall said while there would always be a "small percentage" of people who did not want to be vaccinated, there had been a move towards "much lower hesitancy" in South Australia.