A South Korean presidential candidate dropped out on Thursday, throwing his support to conservative Yoon Suk-yeol in a surprise move that could tip the balance of next week's closely fought election toward the conservatives.

Yoon, flag bearer of the People Power Party, the main opposition to the governing liberal party, joined with Ahn Cheol-soo of the People Party, who had been running a distant third.

"We have no doubt that today's announcement would bring a perfect government change," Ahn told a news conference with Yoon, announcing the merger. "We're one team."

The shake-up less than a week before Wednesday's election is bad news for Lee Jae-myung, representing President Moon Jae-in's Democratic Party. Moon is barred by term limits from seeking reelection.

A survey by Realmeter released on Wednesday, the last day for publication of polls under election rules, showed Yoon ahead of Lee 46.3% to 43.1%.

Given the narrow gap between Yoon and Lee, the swing by Ahn, whose support was around 7%, could mean a decisive conservative win, although it was unclear how many of Ahn's supporters would vote for the combined ticket.

Voters want a president who can clean up polarised politics and corruption, and tackle the runaway housing prices and deepening inequality that have dogged Asia's fourth-largest economy, polls show.

A former prosecutor general, Yoon has promised to stamp out corruption, foster justice and create a more level playing field, while seeking a "reset" with China and a tougher stance toward North Korea.

He thanked Ahn, pledging to win the election and realise their shared vision for national integration through a joint government.

Lee vowed to press on his campaign, telling reporters, "I believe in history and the people. I will firmly walk the path of promoting people's livelihoods, peace and unity."

Yoon wants to buy an additional U.S. missile system, a move his top foreign policy adviser has said would risk economic retaliation from China but provide a chance to improve testy diplomatic ties.

Ahn, a physician and software mogul who lost to the incumbent Moon in 2017, initially had double-digit support on promises to make South Korea a technology and economic powerhouse and for volunteering at COVID-19 clinics with his wife. But his popularity waned even as voters soured on corruption scandals, gaffes and mud-slinging by the two main contenders.

Ahn first made an overture to Yoon in mid-February, saying a merger would bring a "overwhelming victory" and national unity, but earlier negotiations had foundered over how to incorporate the campaigns. 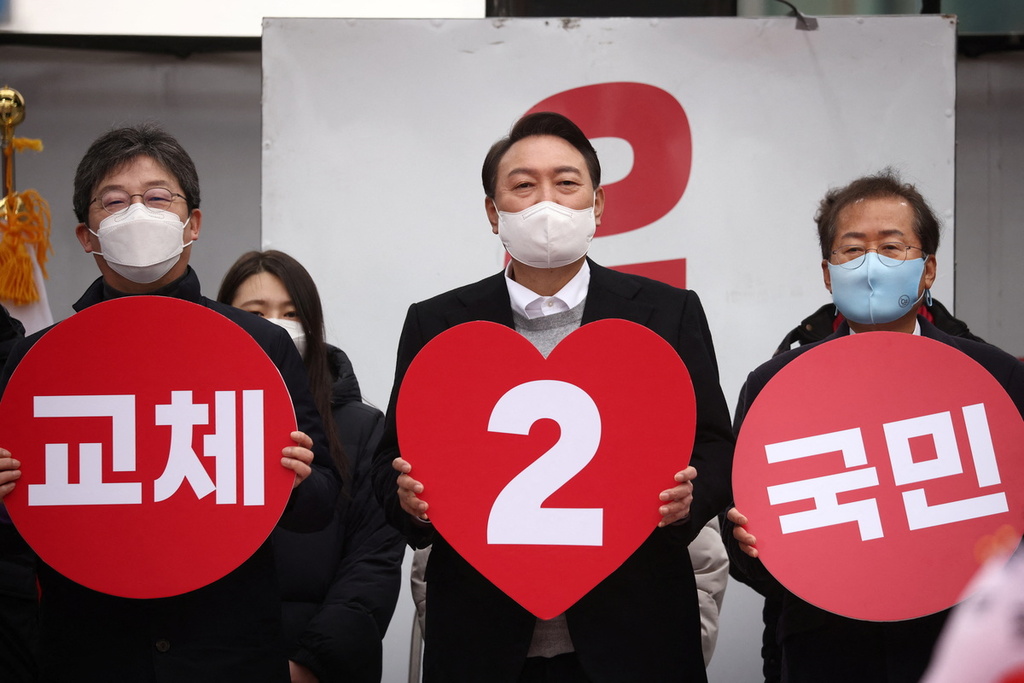 Tight South Korea presidential race overshadowed by Ukraine and gaffes
South Korea's two main presidential candidates are in a tight race a week before a March 9 vote, with the…

Reuters
One subscription that gives you access to news from hundreds of sites
S.Korea candidates woo young voters with 'deepfakes,' hair insurance

South Korean presidential candidate Yoon Suk-yeol got a boost on Thursday when a rival dropped out, but if the conservative…

The Independent UK
Early voting for S.Korea president begins in shadow of COVID

South Korea began early voting on Friday for a presidential election in the shadow of the pandemic, as up to…

Reuters
A ‘Political Novice’ Will Soon Be In Charge Of South Korean Foreign Policy, With What Result?

Regardless of who wins the election, South Korea’s next president—as a political novice in foreign policy—will face a steep learning…

Forbes
One subscription that gives you access to news from hundreds of sites
S.Korea's next president to face a N.Korea forging ahead in nuclear, missile production