Top 10 players Casper Ruud and Stefanos Tsitsipas enjoyed contrasting fortunes on Friday in the opening two matches at the 2022 Laver Cup where former world number one Roger Federer will say goodbye to the tennis circuit.

Ruud, ranked number two in the world, fought off a late rally from the former top 10 player Jack Sock to take the first point for Team Europe.

The 2022 US Open finalist started strongly against the American. He claimed Sock's opening service game and surged into a 3-0 lead.

Ruud looked set fair to claim the set when he served at 5-3 up after 30 minutes. But he fluffed his lines.

Sock, trying to gain parity at 5-5, was also in a munificent mood.

A series of errors gave Ruud three set points. They were all saved before his first double fault of the encounter offered Ruud a fourth chance. Sock's forehand into the net ceded the set after 40 minutes.

The second was a tighter affair and it was Ruud who cracked while trying to take matters to at least a tiebreak. Sock levelled proceedings with a slick drop shot.

And he carried the panache into the initial exchanges of the 10-point match tiebreak.

He won the first three points but lost the next six. He clawed his way back to 8-7 before Ruud edged home.

"It was back and forth," he said. "He fought well in the second set and then we both made mistakes at the end that we don't normally make."

The European squad have won the four previous editions of the intercontinental team tournament. And, boasting five players in the top 10, they are favourites for the 2022 event.

"It's been frustrating because there have been a lot of tight matches like this one over the years.

"But we feel that once it turns it will turn so we jsut have to keep battling and keep putting ourselves in a position.

"Jack gave himself a great chance to pull off the win. You just have to keep believing."

In the second match of the afternoon session, Stefanos Tsitsipas crushed Diego Schwartzman 6-2, 6-1 to give Team Europe a 2-0 lead.

In the break between the first and second set, a man wearing a T-shirt with an anti-private jet logo, broke through the security cordon and set his arm ablaze before security staff dragged him away.

The court was cleaned and play continued. The pause appeared to halt Tsitsipas' momentum and he lost his opening service game. But he recovered his poise to take the next six games and the match in 77 minutes.

All four ties on the first day are worth one point. On Saturday, two points are gained for a victory and three points on the final day of competition. The first team to 13 points will claim the trophy.

Federer will play in the final match of the first day following the singles clash between Team Europe's Andy Murray and Team World's Alex De Minaur .

The 41-year-old Swiss will partner Rafael Nadal in the doubles against Sock and Frances Tiafoe.

A capacity crowd of 17,000 is expected inside the 02 for the tie and a giant screen has been set up on the concourse outside the venue. 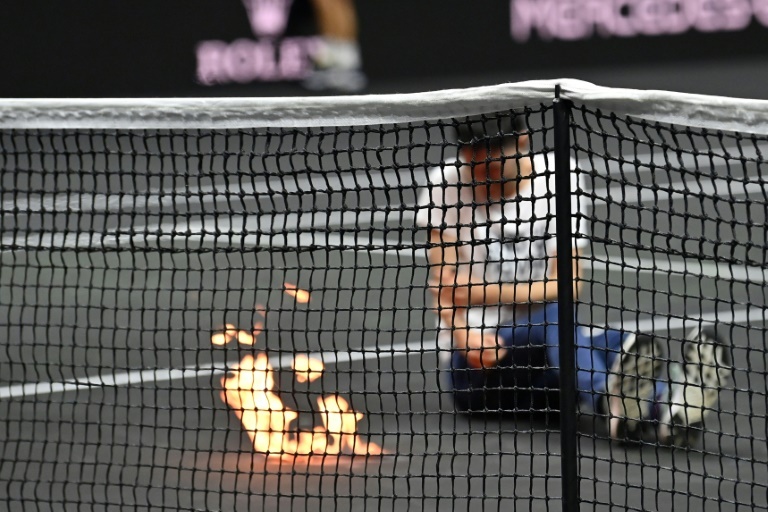 AFP
One subscription that gives you access to news from hundreds of sites
Laver Cup 2022 LIVE: Frances Tiafoe and Team World stun Europe and Roger Federer to win tournament

Team World produced a stunning upset as they swept all three matches on Sunday, with Felix Auger-Aliassime beating Novak Djokovic…

The National (Scotland)
What TV channel is the Laver Cup on? How to watch Roger Federer’s final match tonight

Laver Cup order of play, tournament rules and everything you need to know as Federer returns to the court for…

The Independent UK
One subscription that gives you access to news from hundreds of sites
What time is Roger Federer playing today alongside Rafael Nadal at the Laver Cup?