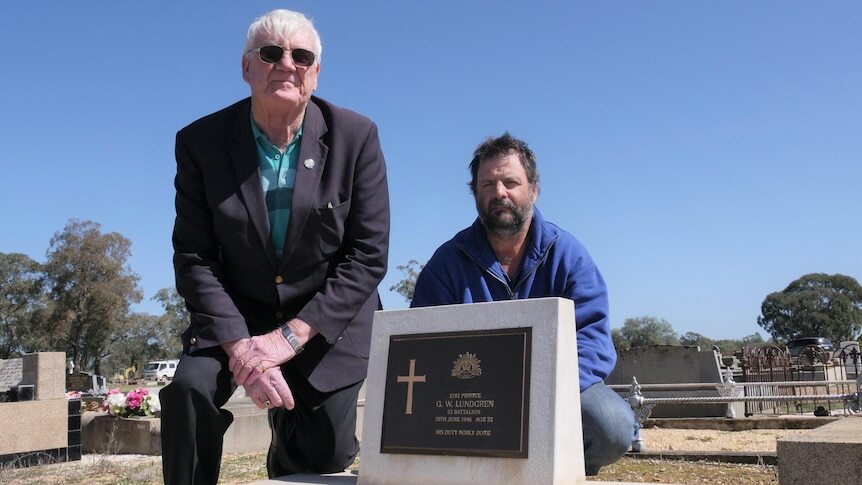 The Rutherglen RSL has recognised seven men who made it back to Australia after serving their country, but later succumbed on their home soil to the various glaring and hidden wounds of war.

The men are just a few who were among the forgotten.

"This is replicated around Australia.

The success of Rutherglen RSL's war grave restoration has given them a reputation, and now others are asking for help to remember their forgotten soldiers.

In November, a man who has been resting in a dirt grave since 1965 in Mitta Mitta, 120km away, will be recognised for his service, after Rutherglen helped the Kiewa RSL successfully get approval from the Commonwealth War Graves Commission (CWGC).

The rural RSL's effort is even starting to cover ground overseas.

It has begun working with a Melbourne family, who have been trying to bring home their loved one who was killed by a rogue elephant in 1965 while serving in Borneo.

He's now buried in Singapore, but his family want him in Australia.

Mr Martin hoped their successful streak with the CWGC would continue.

"When he was killed, it was a great shock to the family, " he said.

"They've been up against bureaucracy since then.

"I am confident we might be successful in having his remains brought home and he can be buried with his family in Melbourne."

In 2016 the remains of 33 Australians, who were buried in military cemeteries in Malaysia and Singapore, were returned to Australia, which buoys Rutherglen RSL's hopes.

"We think the precedent has already been set," Mr Martin said.

"We are talking about one man."

Mr Martin's father was a World War I veteran, and he is particularly passionate to see those who served remembered, after many families struggled to properly commemorate their loved ones.

"I don't think it's particularly the fault of anyone," he said.

Rutherglen RSL president Craig Williams said it was rewarding to see servicemen in the local cemetery no longer in unmarked graves.

"It's gratifying that we are able to do something, and recognise and pay our respects towards our people who served our country and did pay the supreme sacrifice, whether it was on foreign soil or here in Australia," Mr Williams said.

Many of the men at rest under Rutherglen's new plaques died years after war.

The RSL must prove to the CWGC that their deaths were directly linked to the war in order to fund the graves.

It has proved a challenge, especially as mental health conditions such as post-traumatic stress disorder were not formally recognised a century ago, while paperwork trails on personnel could prove difficult to follow.

"Some of the stories with some of the personnel are very interesting," Mr Williams said.

"Some of the personnel enlisted under different names and different birth dates.

"[One of the men] enlisted underage and got sent overseas and got found out about, and got sent back to Australia and put under house arrest, and sort of escaped that and re-enlisted again.

Mr Martin said the restoration of the graves showed the lifelong battle many veterans endured long after they left the war zone.

"It's becoming obvious now that mental health has had a big influence because it resulted in veterans relying on alcohol, so they became alcoholics because of what happened in war to them," he said.

"Then there were the physical illnesses as well."