New footage shows Russian troops storming a woodland area as they attempt to enter the Ukrainian capital Kyiv by crossing the Irpin river.

The video, taken in a wooded area dotted with tall trees by someone walking through the forest, is thought to show Moscow's tanks fired upon by Ukrianian anti- armour teams armed with NLAW missiles.

Gunfire can be heard from the distance, and the person filming pauses and steps back behind a tree as the gunshots get louder.

A bright explosion can be seen in the distance before plumes of smoke waft up into the trees.

As the cameraperson pans across the scene, the ground appears to shake from another violent explosion.

Two more explosions occur concurrently and the camera zooms in on two spots in the near distance, where there appear to be both flames and smoke.

The video continues to pan to the right, where a tanker can be seen making its way down a path into the forest.

Russia has reportedly crossed the river, as the battle for Kyiv gets underway.

The Ukrainian military today said it had stopped Russia's attempt to cross the waterway in the town of Moshchun.

"The night was quite difficult, but in general we can say that the Ukrainian army counterattacked near Kyiv,” he said.

Fighting has been reported on the southwest side of Kyiv, today, as fears rise that a full-scale assault on the Ukrainian capital could be on the horizon.

There are fears Putin could launch similar airstrikes as he did on the city of Mariupol and Kharkiv.

In Mariupol, a maternity hospital was hit and killed three, including a six-year-old girl.

President Volodymyr Zelensky, who is still in Kyiv, today said his "heart breaks at what the occupants have done with our cities, our country, and at what they want to do to our people", who he said needed "urgent help".

Kyiv mayor Vitali Klitschko said today that the capital has been turned into a fortress ahead of the Russian assault.

He said in televised remarks: "Every street, every house is being fortified, the territorial defence is joining.

"Even people who in their lives never intended to change their clothes, now they are in uniform with machine guns in their hands."

Troops are warning civilians not to stray beyond the outskirts of the city because Russian vehicles had been spotted just a few miles away.

If Putin's troops encircle Kyiv, they could shell it as they have done to Mariupol, Kharkiv and Chernihiv.

Ukrainian officials say Mariupol continues to be surrounded by Russian forces but is still in Ukrainian control.

It comes as chilling photos from Mariupol showed corpses being discarded in mass grave sites as the death toll in the city grows.

This week it was revealed more than 1,200 people have died in the port city, formerly the home of nearly half a million people, since the start of the Russian invasion.

Described by rescuers as a humanitarian crisis, authorities have ordered workers to dig 25 metre long trenches as morgues are at breaking point.

In tragic scenes, they were seen making the sign of the cross as the dead- wrapped in an old carpet- are pushed into the makeshift mass graves.

Forty bodies were dumped in the trench in the cemetery on Tuesday, followed by 30 more on Wednesday. They were said to be both civilians and soldiers 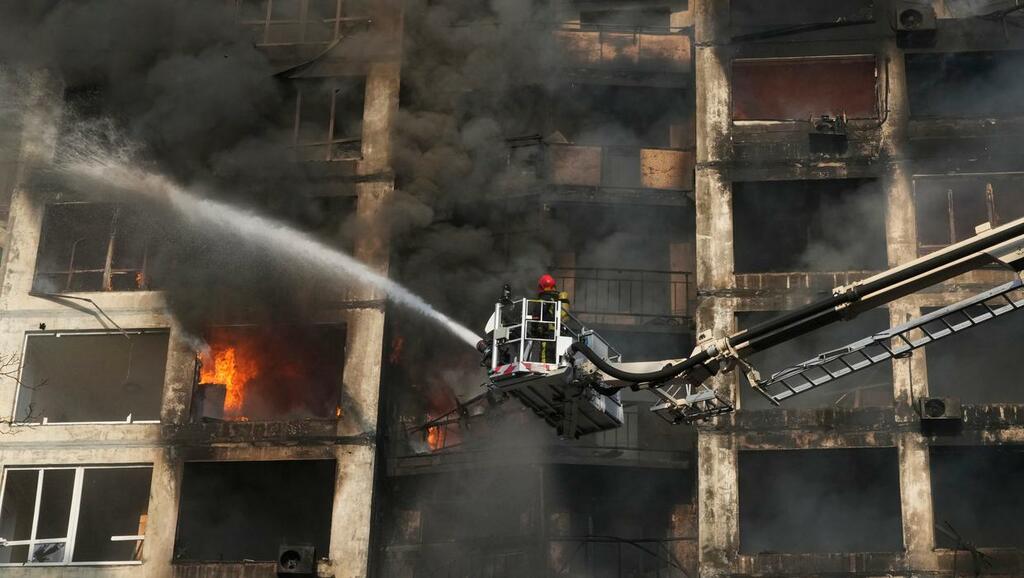 Kyiv under fire as European leaders visit in show of support
Russia’s relentless bombardment of Ukraine has edged closer to central Kyiv, with a series of strikes hitting a residential area…

Analysis: Looking at the fighting so far, some think Putin will be unable to conquer and occupy, but others see…