Russia has said a further 771 Ukrainian troops have “surrendered” at Mariupol’s besieged Azovstal steelworks, bringing the total number to 1,730 this week, while the International Committee of the Red Cross (ICRC) said it had started registering the Ukrainian prisoners of war who left the plant.

The Russian defence ministry said on Thursday that 80 soldiers who surrendered in the past day were being treated for injuries in hospitals in the Russian-held cities of Novoazovsk and Donetsk. Russia’s foreign ministry spokesperson, Maria Zakharova, said on Wednesday that more than 900 troops from Azovstal had been sent to a former prison colony in the town of Olenivka, but it was not immediately clear where the latest group to surrender had gone.

Ukraine has not commented on the evacuation of the soldiers since Tuesday, when its deputy defence minister said the soldiers would be swapped in a prisoner exchange, without providing further details.

It is not clear how many soldiers remain inside the plant. The deputy commander of the Azov regiment, Capt Svyatoslav Palamar, released a video on Thursday evening in which he said he had not surrendered and remained in the steel mill. “The operation is continuing. I can’t give more information now,” Palamar said. He did not say how many other fighters were with him.

Denis Pushilin, the head of the self-proclaimed republic in Donetsk, said on Thursday that more than half the Ukrainian fighters in the bunkers below the steel plant had surrendered.

Pushilin also repeated statements made earlier by Russian officials that the soldiers should be tried in court.

“Let them surrender, let them live, let them honestly face the charges for all their crimes,” Pushilin said.

The Kremlin’s spokesperson, Dmitry Peskov, earlier said the combatants would be treated in line with international norms for PoWs, though several senior Russian politicians demanded they be put on trial and one even called for their execution.

The Russian president, Vladimir Putin, has not publicly commented on the fate of the soldiers since their evacuation started on Tuesday.

Meanwhile, the ICRC said it had registered “hundreds of Ukrainian prisoners of war” this week from the Azovstal plant.

“The ICRC started on Tuesday 17 May to register combatants leaving the Azovstal plant, including the wounded, at the request of the parties. The operation continued Wednesday and was still ongoing Thursday. The ICRC is not transporting PoWs to the places where they are held,” the Geneva-based humanitarian agency, which has experience in working with prisoners of war, said in a statement.

“In accordance with the mandate given to the ICRC by states under the 1949 Geneva conventions, the ICRC must have immediate access to all PoWs in all places where they are held. The ICRC must be allowed to interview prisoners of war without witnesses, and the duration and frequency of these visits should not be unduly restricted,” the agency added.

Several Russian media outlets and pro-Kremlin telegram channels reported on Thursday that some Ukrainian soldiers from the Azovstal plant had already been transported outside Donbas to Russian territories.

According to 161, a local news outlet, 89 Ukrainian soldiers had been transferred to a detainment facility in the Russian border city of Taganrog where they will face charges of extremism in a military court for fighting in the Azov regiment, one of the main forces defending the steelworks.

The Azov regiment was formed in 2014 as a volunteer militia to fight Russia-backed forces in east Ukraine, and many of its original members had far-right extremist views. Since then, the unit has been integrated into the Ukrainian national guard and the regiment now denies being fascist, racist or neo-Nazi. The Azov movement has been used as a key part of the Russian propaganda narrative to justify the war in Ukraine.

Next week, Russia’s supreme court will hear an application to designate Ukraine’s Azov regiment as a “terrorist organisation”, opening the way for sentences of up to 20 years for those convicted of involvement.

Experts believe that a trial of the Ukrainian troops, described by the Ukrainian president, Volodymyr Zelenskiy, as “heroes”, would further complicate efforts to resume the stalled peace negotiations.

The Russian presidential aide Sergey Kiriyenko said on Thursday that Putin personally decided that his country would “take oversight” of the two breakaway territories that make up the Donbas, which Moscow has already recognised as independent. It was another sign that the Kremlin was looking to further annex Ukranian territory, after previously hinting that it was open to annexing seized Ukranian territories, including the southern port cities of Kherson and Mariupol.

Such moves would further complicate any peace negotiations with Ukraine. Zelenskiy has repeatedly stated that the war with Russia would end only when Ukraine reclaimed everything that Russia had taken from it since the start of the war in late February.

Moscow also said on Thursday that it would open access to Ukraine’s Black Sea ports if the west reviewed the sanctions it had imposed on the country. Ukraine, one of the world’s biggest grain producers, has been unable to export its goods through ports since Russia sent troops into Ukraine, causing a spike in food prices and fears of a global food crisis. 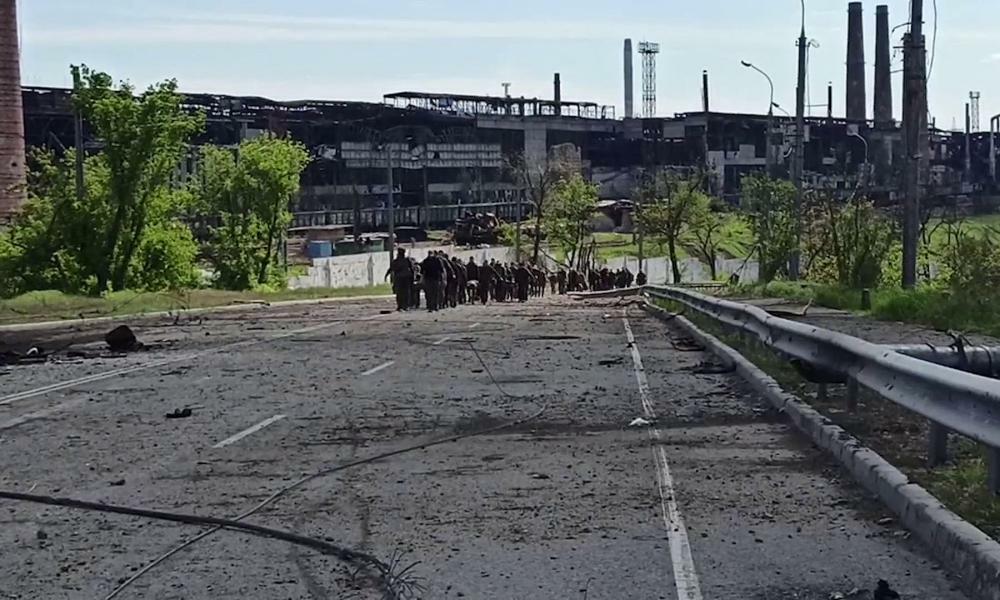 The Guardian - UK
From analysis to the latest developments in health, read the most diverse news in one place.
Ukrainian fighters in Mariupol's Azovstal steelworks have surrendered to Russian troops. Here's what happens next

Nearly 1,000 Ukrainian fighters who had held out inside Mariupol's pulverised steel plant have surrendered after a battle that turned…

Russia has said that nearly 1,000 Ukrainian troops at a giant steelworks in Mariupol have surrendered, abandoning their dogged defence…