A week into the Russian invasion of Ukraine, the Black Sea port of Kherson has become the first major Ukrainian target to fall under the de facto control of Moscow’s forces.

Russian artillery and missiles continue to bombard other major cities, including the second-biggest city, Kharkiv, and the capital, Kyiv, where several large explosions were heard overnight. But the Russian advance on the capital has been delayed by “staunch Ukrainian resistance, mechanical breakdown and congestion” and is still more than 19 miles (30km) from the centre of the city, Britain’s defence ministry said.

Mariupol city council has said Russia is constantly and deliberately shelling critical civilian infrastructure in the southern Ukrainian port, leaving it without water, heating or power, and preventing supplies being brought in or people being evacuated.

Residents in the key Black Sea port of Odesa are increasing preparations to defend it against a potential Russian amphibious landing, amid sightings of a convoy of Russian warships.

A second round of talks between Ukraine and Russia was due to get under way on Thursday. The international criminal court (ICC) has opened an investigation into possible war crimes in Ukraine after 39 countries formally referred reports of atrocities, the largest referral it has ever received. And more than 1 million people have so far fled Ukraine in the fastest refugee exodus this century, the UN said.

Russian troops in the southern city of Kherson:

A series of explosions were reported in Kyiv in the early hours of Thursday following Russian airstrikes. The CBS reporter Charlie D’Agata was filmed as a bright flash and large boom could be seen and heard behind him.

The basement of a Kyiv hospital is now the maternity ward, where new mothers are bringing life into a world violently upended by the invasion.

What has happened since Russia invaded?

Fighting and other military activity took place around and on the way to Kyiv.

A substantial attack was aimed at the eastern city of Kharkiv.

On Friday 25 February, Russian forces reached the outskirts of Kyiv and carried out an amphibious assault from the Sea of Azov near Mariupol. The shape of the Russian incursion became clearer.

On Saturday 26 February, Russian forces in control of territory to the north-west of Kyiv continued their assault on the capital.

Elsewhere, heavy fighting was reported in and around Kharkiv and there were Ukrainian counterattacks in some places previously claimed by Russian forces.

Pre-dawn blasts were heard again in Kyiv and in Mariupol, which was surrounded by Russian forces and under heavy attack.

On Tuesday 1 March, Russian forces bombarded the government headquarters in Kharkiv, and the armoured column continued rolling towards the capital.

On Wednesday 2 March, Moscow’s forces took the port and train station in the strategically important city of Kherson, on the Black Sea. Russian paratroopers landed in Kharkiv (pictured below) overnight, after several days of fierce bombardment that killed or wounded dozens of civilians. Kyiv came under more heavy shelling as Russian forces stepped up their offensive and moved closer towards the capital in an apparent attempt to encircle it. Mariupol was reportedly surrounded by Russian troops.

How did we get here?

Over the past few months Russia deployed hundreds of tanks, self-propelled artillery and short-range ballistic missiles from as far away as Siberia to within striking range of Ukraine.

The second half of February was long seen as the most likely period for a potential offensive. Russian soldiers stayed on in Belarus beyond the end of planned military exercises, and the Winter Olympics, hosted by Russia’s ally China, concluded.

The invasion was preceded on 22 February by Putin saying Russia would recognise the territorial claims of self-proclaimed republics in Luhansk and Donetsk. He had already ordered his forces into Russian-controlled territory in Ukraine.

What do we know about Russia’s deployments?

Scores of battalion tactical groups – the smallest operational unit in Moscow’s army, consisting of around 800-1,000 troops – were put in place near the borders of Ukraine in Russia and latterly Belarus prior to the invasion. As of 18 February, the US estimated that Russia had between 169,000 and 190,000 personnel in and around Ukraine.

An estimated 32,000 separatist forces were already operating in the breakaway areas in Donetsk and Luhansk – some of whom were likely to be unacknowledged Russian forces – before the invasion.

Many of the heavy weapons stationed near Ukraine arrived as far back as spring 2021. Over the new year Russia also began to move tanks, artillery, air-defence systems and fighter jets to Belarus for joint exercises in February. That deployment has since grown.

These satellite image composites show the buildup of troops in Yelnya and Pogonovo over the new year.

The US estimates that 10,000 troops moved into Crimea in late January and early February.

How do the militaries compare?

Russia’s invasion pits the Kremlin’s large, recently modernised military against an adversary largely using older versions of the same or similar equipment, dating back to the Soviet era. Russia has significant numerical advantages on land and in particular in the air and at sea, although Ukrainians are defending their homeland.

What is the historical context?

In 2014 Putin sent troops to annex Crimea, a mainly Russian-speaking region of Ukraine. Russia also incited a separatist uprising in Ukraine’s south-east, clandestinely sending soldiers and weapons to provoke a conflict that grew into a full-blown war.

A 2015 peace deal established a line of demarcation and called on both sides to make concessions. Since then low-level fighting has continued along the front, and each side has accused the other of violating the agreement.

Going back further, Russia has long opposed any attempts by Ukraine to move towards the EU and Nato. One of Putin’s often repeated demands is a guarantee that Ukraine never joins Nato, the alliance of 30 countries that has expanded eastwards since the end of the cold war.

What is the role of Nord Stream 2?

On 22 February, the German chancellor, Olaf Scholz, stopped the certification process for the Nord Stream 2 gas pipeline in response to Russia’s recognition of the two self-proclaimed republics.

First announced in 2015, the $11bn (£8.3bn) pipeline owned by Russia’s state-backed energy firm Gazprom was built to carry gas from western Siberia to Lubmin in Germany’s north-east, doubling the existing capacity of the Nord Stream 1 pipeline and keeping 26m German homes warm at an affordable price.

Europe’s most divisive energy project, the route of Nord Stream 2 bypassed the traditional gas transit nation of Ukraine by running along the bed of the Baltic Sea. It faced resistance within the EU, and from the US as well as Ukraine, on the grounds that it increased Europe’s energy dependence on Russia, denied Ukraine transit fees and made it more vulnerable to Russian invasion. 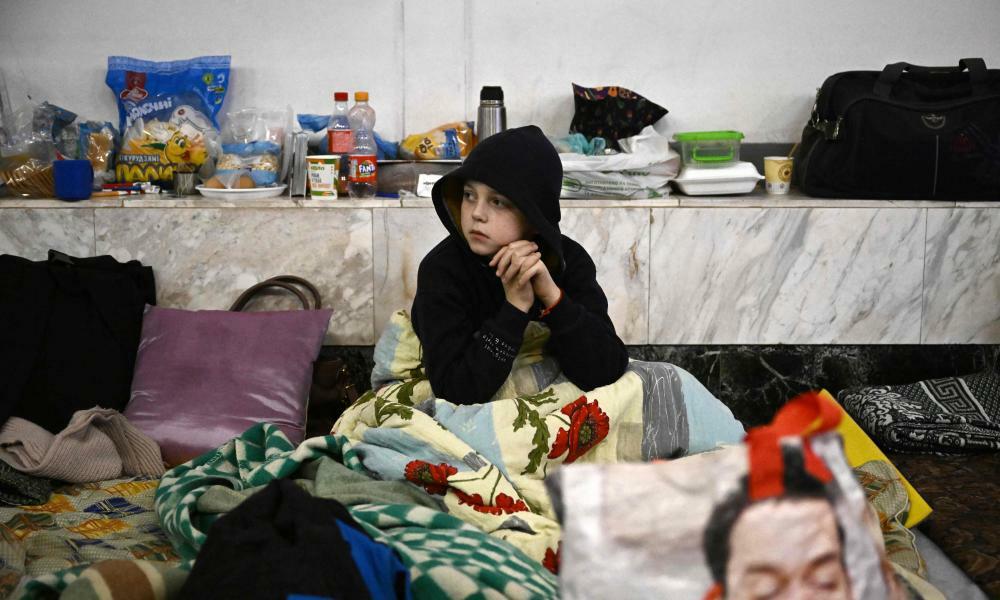 Russia’s war in Ukraine: complete guide in maps, video and pictures
Where is fighting happening and how did we get here?

The Guardian - UK
One subscription that gives you access to news from hundreds of sites
Russia’s war in Ukraine: complete guide in maps, video and pictures

Russian troops have been bombarding major Ukrainian hubs including Kyiv, Kharkiv and Mariupol