Russia claimed to have seized the entirety of Ukraine’s Luhansk region after weeks of brutal fighting, which if confirmed would hand President Vladimir Putin a significant military achievement more than four months after he launched his invasion.

Sergei Shoigu, Russia’s defence minister, reported to Putin on Sunday that Russia’s forces had “liberated” the whole of the region after capturing Lysychansk, Ukraine’s last stronghold in Luhansk, the ministry said.

Ukraine’s general staff on Sunday evening confirmed the loss of Lysychansk, saying its troops “were forced to withdraw from their occupied positions and lines” after heavy fighting. The fall of the city leaves at most only a few minor Luhansk settlements under Kyiv’s control.

Ukrainian officials had warned repeatedly in recent days that Lysychansk could fall after troops retreated across a river from neighbouring Severodonetsk.

“There are risks that the entire Luhansk region will be occupied, they are understandable,” President Volodymyr Zelenskyy told a press conference earlier on Sunday. “You must understand that the situation can change every day.”

Serhiy Haidai, Luhansk’s Ukrainian governor, wrote in a post on social media app Telegram, that Lysychansk was a city “on fire”.

“The occupiers have likely thrown all their forces at Lysychansk. They attacked the city with incomprehensibly cruel tactics.”

Haidai said the destruction in Lysychansk was even worse than in Severodonetsk, which was largely levelled by artillery bombardment.

Pro-Russian social media accounts posted videos showing Chechen troops posing in the centre of Lysychansk and a Soviet flag flying from the town hall. The posts were geolocated by open source intelligence and western analysts.

The advance across Luhansk would mark the first time Russia had established full control over a Ukrainian region since the early weeks of the war in March.

It also puts Russia closer to capturing eastern Ukraine’s Donbas border region, which is made up of Luhansk and neighbouring Donetsk.

Russia is likely now to switch its focus to Slovyansk and Kramatorsk, the biggest cities in Donetsk still under Ukrainian control.

Putin has claimed the war’s main goal is to “liberate” the Donbas, where Russia began fuelling a separatist proxy war that killed more than 15,000 people in 2014 after a pro-western revolution in Kyiv.

Pro-Moscow accounts on social media posted footage of what they claimed were overjoyed locals greeting their “liberators”. Ukraine has already evacuated most of the population further west.

The industrial region is mostly controlled by Moscow-run separatist groups whose independence is only recognised by Russia and Syria.

But officials have regularly indicated that Russia’s goals stretch much further — to essentially ending Ukraine’s statehood.

Dmitry Peskov, Putin’s spokesman, told state television on Sunday that Ukraine would have to agree to “all of our conditions” for the war to end.

Russia shook up its command and switched its focus to a gruelling offensive in the Donbas in late March after its initial attempt to capture Kyiv and most of the rest of Ukraine east of the Dnipro river failed. It also controls Kherson and some of neighbouring Zaporizhia in the south, as well as parts of Kharkiv to the north of the Donbas.

On Sunday, Russia claimed Ukraine launched missile and drone attacks at the border cities of Kursk and Belgorod. The defence ministry said it had shot down all the missiles but that shrapnel hit residential buildings in Belgorod, which is just over the border from Kharkiv.

Viacheslav Gladkov, Belgorod’s governor, said four people died in the apparent attack and that dozens of buildings were damaged. He claimed three of the victims were Ukrainian citizens, who state media said were refugees from Kharkiv.

Russia has blamed Ukraine for carrying out several attacks on border cities and nearby infrastructure for supply routes since the war began. Though Ukraine has not admitted to any of the attacks, it has mocked them in social media posts suggesting Russia was getting its just deserts for the invasion.

Neighbouring Belarus, which is letting Russia use its territory to attack Ukraine but has so far resisted Putin’s efforts to drag it into the war, said on Saturday it had also intercepted Ukrainian missiles launched at military targets.

Ukraine did not confirm those claims but said it had destroyed a Russian base in Melitopol, a city in Zaporizhia, in a rocket strike. 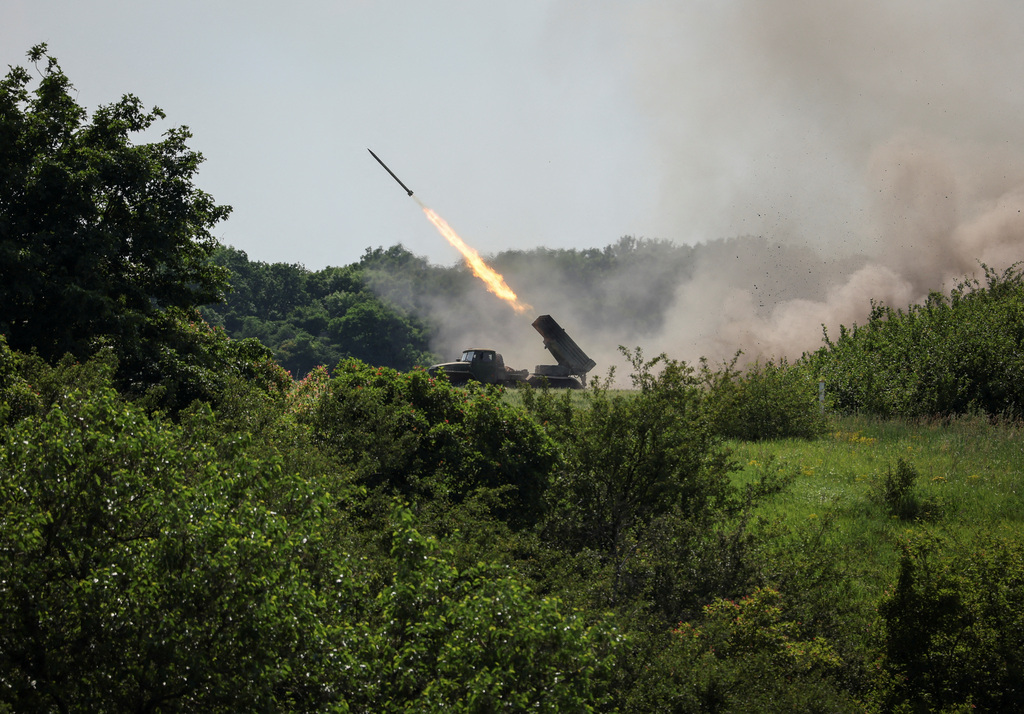 Russia claims full control of Luhansk region as key city captured
Ukraine’s military command says its troops have been forced to retreat from the key city of Lysychansk.