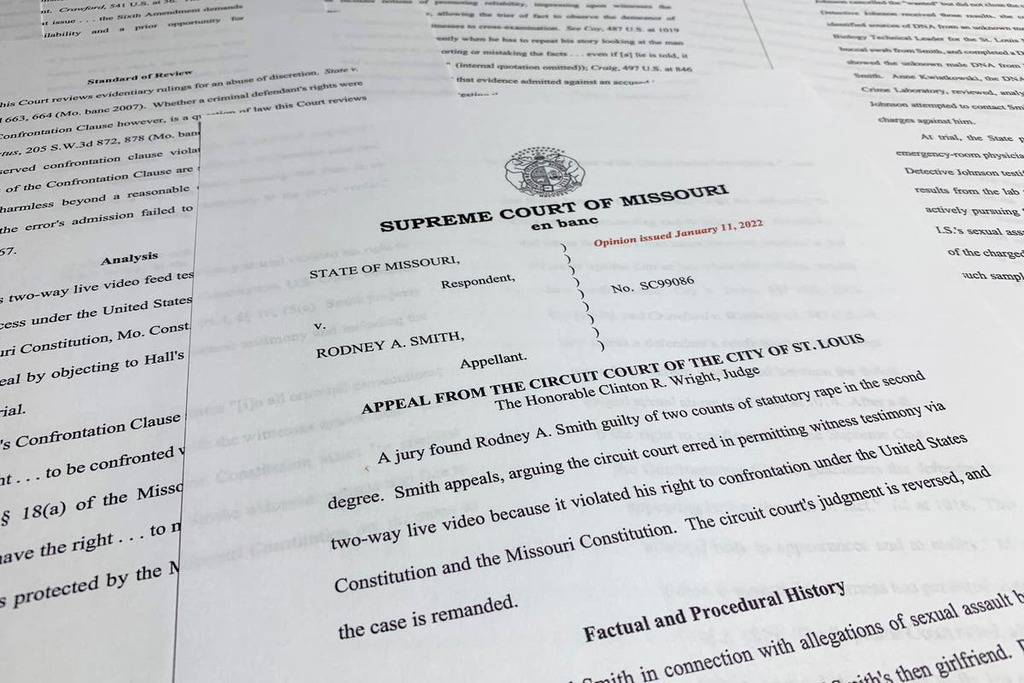 An overturned conviction in Missouri is raising new questions about video testimony in criminal court cases nationwide, and the ruling could have ripple effects through a justice system increasingly reliant on remote technology as it struggles with a backlog of cases during the coronavirus pandemic.

Missouri's highest court on Tuesday reversed the statutory rape conviction of Rodney Smith in a case from St. Louis, finding that an investigator’s video testimony violated the defendant's Sixth Amendment right to confront the witnesses against him.

The investigator appeared remotely in 2019 because he was on paternity leave, testifying that DNA evidence taken from the victim’s clothing matched the defendant's DNA. The victim had since recanted her accusations, so the conviction and sentence of probation turned on the DNA evidence.

Many state and federal courts halted all criminal trials for months during the pandemic, allowing remote trials only when defendants explicitly agreed to forfeit any rights to in-person confrontation of their accusers. The Missouri ruling differs from many pandemic-era cases because the judge went ahead despite the defendant's objections.

State court systems typically handle millions of cases every year in total, the vast majority of which will not be directly affected by the legal questions raised in the Missouri ruling. But even if that decision impacts only several hundred cases, it would mean yet more challenges for an already overburdened judiciary.

The decision could eventually make this a test case for the U.S. Supreme Court, said Michael Wolff a former chief justice of the Missouri Supreme Court and a professor at the St. Louis University School of Law.

“This guy was convicted with the use of Zoom technology and could not have been convicted without it,” Wolff said. The nation's highest court has allowed exemptions for child witness to testify remotely to shield them from a potentially traumatic experience, but “you still don’t get away from the fact that the Constitution says there’s a right to confrontation.”

The U.S. Supreme Court has grappled with the legal ramifications of remote testimony for decades, though the constitutional questions it raises have never been fully answered.

A landmark ruling in Maryland v. Craig in 1990 upheld a trial judge’s decision to let a victim of child abuse testify remotely. In a 5-4 decision, the court said the Sixth Amendment doesn’t guarantee an “absolute right” to in-person confrontations, especially if remote testimony “is necessary to further an important public policy.” It said lessening the trauma of testifying to a child was a compelling public interest.

The dissenters said the Constitution provided no wiggle room and that the point was “to place the witness under the sometimes hostile glare of the defendant.” Some of those same justices were in the majority 14 years later in Crawford v. Washington, which asserted that the right to confront an accuser in person was near-to-absolute.

Recently, the Minnesota State Court of Appeals differed from the Missouri court by ruling that allowing a witness to testify via live, remote two-way video did not violate a defendant’s rights.

During the pandemic, multiple trial-level state and federal courts have displayed care in not appearing to trample on the principle, which dates to Roman times, that those accused of crimes that could cost them their freedom have a right to confront their accusers.

In August, the Commonwealth of Kentucky Court of Appeals upheld a lower court's decision denying a prosecutor's request to let one witness testify by video at a fraud trial from prison because traveling to court would put him and others at risk of getting COVID-19. The appeals court said “general concerns about the spread of the virus do not justify abridging a defendant’s right to in-person confrontation” and that prosecutors never proved the witness was particularly vulnerable to COVID-19.

“The fundamental question has been this: is a remote witness testifying by technology functionally the same as being there?” said Fredric Lederer, chancellor professor of law and director of the Center for Legal and Court Technology at William & Mary Law School. “We don’t know if this is constitutional at this point.”

Those testifying in person can help show that they are speaking voluntarily. People often take body language into account as they are judging truthfulness, but research has raised serious questions about the widely held idea that people can gauge trustworthiness better in person, Lederer said.

“There really is no science to back that up,” he said. ”At all. Quite the opposite."

While the original Missouri case unfolded before the pandemic began, the use of remote video during court proceedings has expanded exponentially since it took hold.

“This potentially affects every criminal case in which a prosecutor wants to present a remote witness,” he said.

But in many pandemic-era proceedings, defendants have agreed to waive their Sixth Amendment rights so trials can go forward. The Missouri case was different in that the defendant objected to the investigator appearing remotely.

“If there was not an objection, I think the courts would be wary about upsetting the results of a conviction,” Wolff said.

In St. Louis County, for example, prosecutors are confident in the convictions they have secured during the pandemic, largely because defendants waived the right to confront witnesses in person, said Chris King, spokesman for Prosecuting Attorney Wesley Bell. “So there should be no grounds for appeal,” King said.

Defense attorney Nina McDonnell argued the recently decided Missouri case and said the ruling is especially important during the pandemic.

“It makes it clear that it should be up to what rights (defendants) want to give up or maintain, not any other factor," said McDonnell, an assistant public defender in St. Louis.

Two years into the COVID-19 pandemic “we know it’s not the same thing" to have video testimony, McDonnell said. “That’s why courts are scrambling to reopen.”